Oh my gods! I was SO worried!

Black Adam, who can fight Captain Marvel to a standstill, has the power to knock over a building with a wave of his hand, and can move at hypersonic speed, 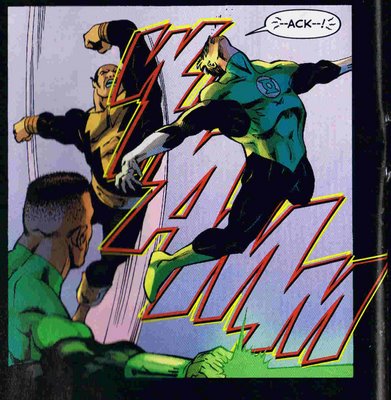 Then suddenly I realized: he hit Hal in the head. 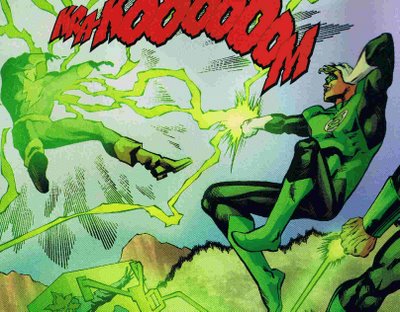 Phew! What a relief!

Yeah, I was going to point that out to you. For more H3 check out Giant Size Justice League of America #140, I think... maybe 141. It was one with the Manhunters... Third page, half page spread.

Can it be assumed that Hal Jordan is protected by some kind of really thin, almost invisible, force field?

I haven't read that many Green Lantern comics, but I don't remember anything like that ever being illustrated except for when space travel's involved. He always just throws a green wall up to shield himself.

Hal suffers from "Homer Simpson Syndrome." Per the Wikipedia, HSS is "...a cushioning layer of fluid around his brain that protects [the patient's] head from injury..."

Essentially, Hal's wearing a football helmet wherever he goes.

Granted, the volume of the fluid layer necessitates the HSS patient have a smaller brain to maintain the human-sized skull, but hey. Hasn't mattered to Hal much.

I read somewhere that it's actually a force field aura that all GLs project, that keeps their heads safe from, er, bumps. Just like the aura Superman projects that makes his suit indestructible, while his cape (not included in Supes's aura) is not shielded.

Maybe the ring automatically protects you from life-threatening injuries, but doesn't do anything (unless you put up a shield of some fort) for lesser ones.

So Hal sees an attack that might otherwise break his arm, and knowing that the ring won't automatically work on that (and that he can't or is too lazy to put up a specific shield to block it), he blocks the blow with his head, whereupon the ring's auto-protect feature will kick in...

It is Hal Jordan's idiocy that protects him. He's too stupid to realize that what little brain he has is being turned to mush.

I could see the Guardians programming Hal's ring with a specific fortification for his head after so many years of this.

Sadly, the damage was already done...

Unless of course, it's just hollow to begin with.

(What issue is this from?)

No, if it was solid bone it would shatter. My bet would be sponge cake.

The second I read that I expected to come to this blog and read a full page mockery of hal jordan getting clobbered.

Black Adam clocking you on the noggin counds as "life threatening", I think. :)

Wow, I read that and didn't notice!

I must've been too excited over the fridge construct in B4B

Refrigerators are the new boxing gloves.

You should have included the Thundermind part. He manages to hit Hal in the head without ever touching him....

Do the rings have auto defense again? That seemed like an idea that would make sense, but it became a plot problem towards the end of the old Green Lantern Corps series: a Green Lantern would get zapped or hit on the head or whatever, and be knocked unconscious. Then, the villain would have to keep knocking the GL out until the ring's 24-hour charge expired. (The ring would still protect the GL from a fatal injury.) After that, the GL would be toast.

Seems complicated, but it boils down to Hal could get killed by someone with a yellow two-by-four that could stay awake for 24 hours...

So this is old news and no one will read my comment, but ... Hal gets punched in the back, not the head. He just had his backbone crushed. Or would have, I guess.

I have read old stories that indicated the ring protected Hal at a subconscious level, even while he was unconscious. However, DC has been VERY inconsistent about GL rings in this regard.

Writers of GL characters just don't seem to think the ring's powers through. The first plan of action should be a full body force field. Or at least to surround the threat with a green bubble. But GLs just aren't written as well as they should be.