You need to know who Egg Fu is. Right--now. Trust me on this one.

Some say Egg Fu is racist and one of the most offensive characters of all time. To them, I have one reply: Extrano. End of subject.

Let's face it, gang: Wonder Woman was at the forefront of confronting gender issues. She was not a pioneer in racial sensitivity. 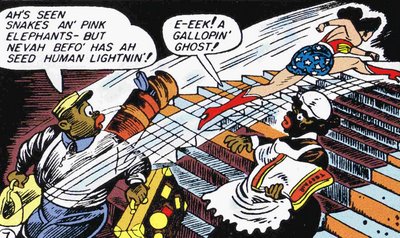 Wonder Woman was a WWII propagandist, and racial cariactures of the Japanese, German, and Italians were just part of the job. From our viewpoint fifty years later, this may seem unpardonable or at least in poor taste. But remember that the Axis nations made their "racial superiority" a crux of their propaganda; we should not be surprised that jabs of "racial inferiority" were used as a counterweapon. All's fair in love and war -- and those are what Wonder Woman was about.

I make that point because in creating Egg Fu, the Madman Bob Kanigher was trying to return Wonder Woman to her roots and revivify her title. Without WWII as her milieu, Wonder Woman had floundered. Her original mission of showing that woman's creative power of love was greater than man's destructive power of the sword was the vision of her creator, William Moulton Marston. He, of course, had to be strictly monitored by editors because his principal method of demonstrating his vision was through bondage and discipline scenes. 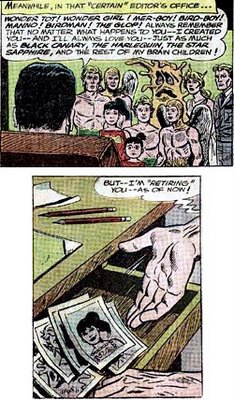 So in the post-war years, a purposeless, pointless Wonder Woman had paled into "My Little Pony" stories, a wan copy of the Superman Family; if you've never read a "Wonder-Tot" story, then thank Hera.

Madman Bob decided he wanted to return Diana to her pre-war vibe.

He canned all the "Wonder Family" crap and tried to pit Diana against zany villains in a setting of international politics. Of course, he also had her kidnapped by a talking gorilla from outer space, but that's another story.

Anyway, replacing the Axis's Japanese & Germans with the contemporary "foe" of the Communist Chinese, he created a villain that he hoped was in the style of the Golden Age Wonder Woman: Egg Fu. Now, remember, Kanigher is the man who created Dr. Domino, the greatest of all object-headed villains. In that context, an evil Humpty Dumpty like Egg Fu doesn't seem that strange.

He did other things, like bring back the Cheetah, Paula Von Gunther, Minister Blizzard, the Kangas. Take a look at the covers, and note the repeated mentions of "the Golden Age". Kanigher was trying to begin "a new Golden Age of Villainy".

Egg Fu was not Bob's single best decision; he later regretted it publicly. Gotta hand it to him, though: Egg Fu surely does make an impression. He's a great visual. I'm part Chinese myself, and I think E.F. is freakin' hilarious. I could do without the accent though, particularly since it's Japanese. I hate when people sclew that up. 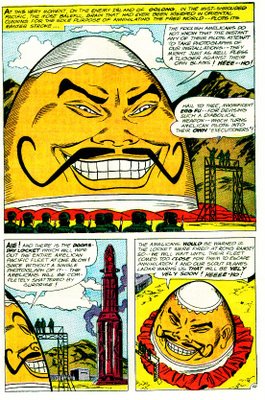 Little known fact:
if Egg Fu ever appears in the same panel with Etta Candy, the world will end.
Heeee-ho! + Woo-woo! = Anti-Life.

Before anyone asks: no, they never really explained exactly what Egg Fu was. He simply was. Heee-ho!

John Byrne, a person of confidence, even did his own version of Egg Fu (Wonder Woman 128-129), as an evil computer from the Fourth World. Points for guts, John.

But I don't think that's the last we've seen of Egg Fu.

But remember that the Axis nations made their "racial superiority" a crux of their propaganda; we should not be surprised that jabs of "racial inferiority" were used as a counterweapon.

True, but when you compare American propaganda cartoons of the Nazis to cartoons of Japanese soldiers, it becomes very obvious very quickly that there's a lot more racism at work in portraying the Japanese. The Germans for the most part look like enemy soldiers, or are sometimes simply personified by Hitler; the Japanese as a people are drawn to look almost like humanoid rats or mice.

That said, I'm all for the rehabilitation of Egg Fu. A giant evil egg with a prehensile mustache? I'm there.

I am totally changing my email sig to:

Not to inject any anime geekdom into this most sacred comic blog, but does anyone see Bo-BoBo in Egg Fu? What with the moustaches and weird oval shaped 'beings'? Just saying.
And before anyone goes thinking the return of Egg Fu is a Morrison idea, remember: no one makes past DC missteps into current DC legends like Geoff Johns.

Wouldn't the Kanigher/Andru Wonder Woman make a swell SHOWCASE volume? I'd buy it!

A minor correction -- Marston was never "let go" from Wonder Woman. He wrote the series right up until his death in 1947. Original artist Harry Peter *was* let go in the late '50s... maybe that's what you were thinking of?

I don't blame Byrne a bit. Egg Fu is much better than any of the characters Byrne created.

Byrne created the current Wonder Girl, so that's not too shabby.

And he re-worked Hippolyta as the fun loving, time-traveling, Nazi-bashing, Wildcat-boinking Valkyrie we all came to know and love.

So don't knock his Wonder Woman run TOO much

I was a little surprised he wasn't one of the Great 10 in 52 last week.

Egg Fu was one of those things I read as a child that, on mature recollection, I began to doubt could have been quite as I remembered...

So you thought the same thing about 52 eh captain?

Thats the very first thing I thought of when I saw that scene.

Forget all those continuity implants, Superboy reality-changing punches, Scarlet Witch reality-wipes, etc. The next time a reeeeeeally stupid, Wonder Tot-esque idea comes along, I want the editor to appear on-panel and take it away.

Don't be so sure he wasn't one of the Great Ten last week.

How could it be anyone but?

Also, the reference to them calling him the 'Great One'? Thinki of one in the numerical sense, as in 1 through 10.

I'll always love Kanigher's "in-the-drawer" retcon. It was the most brilliant thing the guy ever thought of.

Anybody notice that Wonder Girl was put in there too? Bob Haney didn't and we ended up with "The Return of Donna Troy."

Yeah, this is exactly what I was gonna come on here and say. This guy+Devilance the Destroyer=potentially great storytelling when it coems to taking lame and/or one-off villains and making them relevant. Either that, or just a bunch of Kirby fetishists (since Byrne made this a Fourth World character)

I want Egg-Fu to team up with Mister Mind.

I want Egg Fu to team up with Worldbeater.

Maybe the most disturbing movie I ever seen in my whole life!! thanks for share it with us!