Surely you remember "the Best Lois Lane Panel Ever"?

Thanks to Absorbascommando Don Reisig, we know that that Golden Age panel was reprised in the Silver Age. Or was it? 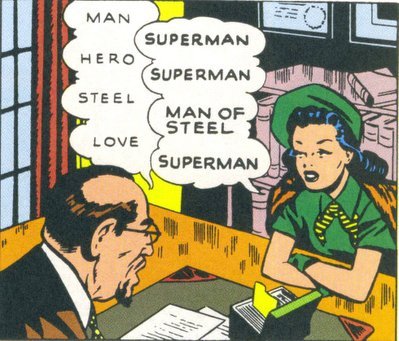 Lois has engaged an eminent psychiatrist (you can tell from the beard) with the most powerful Yellow File Card of Piercing Insight imaginable. Where was this man when Hal Jordan lost it, I ask you? Lois is an active participant in her own recovery, alert, leaning forward aggressively into the doctor's territory. Plus, she's wearing one of the spunkiest little outfits I've ever seen, right down to the kryptonite green gloves. That's a Golden Age outfit that screams, "Don't muck with me, doc! I've got a problem and I'm here to solve it!" No shame, no shyness; there's a reason Lois is in Action Comics, folks. Dr. James Lipton is all aquiver and can barely keep up with the Lois's psyche, and the whole scene's more like a riveting evening on Inside the Gal Reporter's Studio than a shrink session. 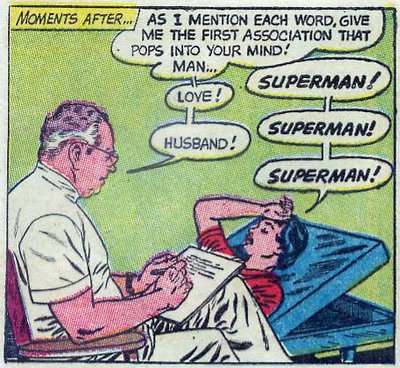 Lo, how the mighty have fallen! No more Viennese experts for poor Lo-Lo. She's stuck with the bored and weary corner pharmacist, who, instead of using a Famous Freudian Filebox, is calmly scratching out her prescription for Xanax on a cheap steno pad from the Rea & Derrick he works at, immediately aware that she's a hopeless codependent mess. And she is, lying there in some frumpy suburban hausfrau outfit like a worn-out dishrag, draped supine on a cheesy hospital cot like a M*A*S*H extra, with her hand stuck to her forehead in the universal "woe is me" symbol.

You disgust me, Silver Age Lois! Where is your Golden Age verve, your gal-elan, your moxie? Gone, all of it, eroded by month after month of cruel identity hoaxes, hissies with Lana, bizarrely extreme yet still temporary transmogrifications of your physiognomy, and imaginary stories spent shacking up with chubby Lex Luthor. There it lies, a silent but eloquent indictment of post-war American society, the remains of the Toughest Cookie in the Golden Age, eaten away by the acidic insanity of the Silver Age.
Posted by Scipio at 3:56 PM

Yeah, but look how she pulls it together in the bronze age. She gets herself turned into a black person in order to understand prejudice, hangs out with psychos like Thorn, and to a large extent gets over Superman.

Dood, I swear it looks like Lois has a mustache and a van dyke in her Silver Age visit to the shrink.

That wasn't a Golden Age psychiatrist, that was James Lipton's first appearance in a DC comic way back before he got the regular slew of questions down.

"Dood, I swear it looks like Lois has a mustache and a van dyke in her Silver Age visit to the shrink."

Dood,I swear,this neurotic fixation on sanity is going to drive us all INSANE!!!!

Actually, I think this was part of the radical golden age mega-crossover that dealt with the repercussions of character's actions... MOMENTS AFTER!!!

Ha! For the pure brilliance of the language alone, this is a contendah for "Best Post Ever"... But it's the spotlight on the the Silver Age Wimping-Down of Lois (and by extention, all of DC comicdom) that seals the deal.

It was only a matter of time before she ended up (as we saw her in Morrison's Earth 2) with Jimmy Olsen, Superwoman's Gimp.

It's more than the image. Look at the lettering. In the first panel, the words are normal (and cleverly varied). These are Lois calm and considered answers.

In the second bold, italics, ALL CAPS, EXCLAMATION POINTS! It's DRAMA! But it's also terribly weak.

God, woman, pull it together. You have a Pulitzer!

Am I losing all sense of perspective? I actually take your last two paragraphs very seriously and agree with them. Nah, it's just a sign of regular doses of the absorbascon making me a smarter man, yeah, that's the one...

Joe Schuster was an underrated artist.

I found a great deal of effective data in this post!
Chunky Beef Fritters