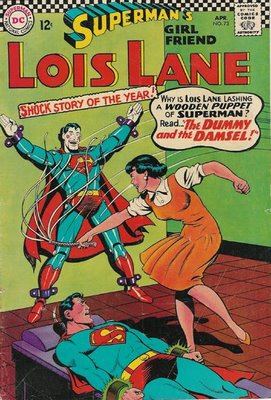 If the Superman family ever decided to air out all their dirty laundry on Springer, I have this vision of everyone in the audience being annihilated by concentrated craziness beams shooting out like from the Lost Ark then going into the TV and sucking the home audience through their screens into the Phantom Zone. That is how consistently messed-up this stuff is. It's divine. Remind me why we ever wanted comics to be "realistic?"

anonymous said: "Remind me why we ever wanted comics to be "realistic?""

I could never understand why miserable + nasty = realistic anyway.

Hmmm. I am not sure I would call that realistic.

Grrrr. I am dark and moody and I kill people easily, glad there are no consequences! Grrrr.

I would say that they moved science fiction soap opera to Friday the 13th based soap opera, only becase they are cartoons the women could have even more improbable breasts. Realistic in the late 80s and early 90s, not so much.

If I have to explain to some kid one more time why "Batman doesn't just kill the Joker", I'll scream.

Hey, kid; why don't the POLICE just kill people? That would save so much time and money!

Freakier than me? Come on, man. That's Monday nights at my house...except our dummy is dressed as Hal Jordan, and the wife uses a bright yellow cast-iron frying pan.
And it's all thanks to you, Scip. You saved our marriage!

And Superboy is the freakiest of all.

Wait a minute... you're saying this kind of thing isn't normal? I still have so much to learn about 21st century manners.

By the way, nobody should visit my blog today. Without going into details, I'll just say that something's horribly wrong with it. And also that Storm Boy is a big, fat liar. (Emphasis on "fat." Haw!)

When you are with someone who will cater to your fantasies, you don't let her go. That Superman is no dummy...

There are too many wood jokes to say.
My head is going to explode.

What do you think their safe word is?

Enjoy the veal, everyone...

"Wooden" you behave the same way?

What is "Friday the 13th style soap opera?"