Most people think that the only comic book theme Neal Hefti ever wrote was the theme to the Batman television show (including its dadaeqsue lyric, 'nananana nananana'; so avant garde, even for the sixities). But he also wrote the lyrics to another well-known television theme.
Those lyrics, which you've probably never heard (with good reason), are below, and I'm convinced that Hefti had another comic book pair in mind at the time he wrote them. For the record, I'm okay with the "youthful ward" thing; poor boy and rich man, helping each other out. It's okay, it's the way of the world.
But ... "boy pals"? No. No, that's just wrong...
No matter where they go
They are known as the couple. 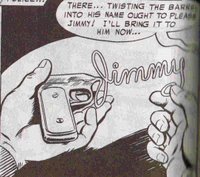 They're never seen alone
So they're known as the couple. 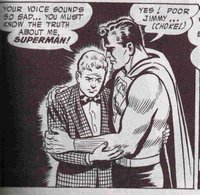 As I've indicated
They are never quite separated, 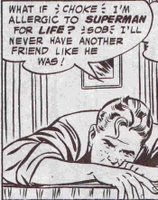 They are peas in a pod.
Don't you think that it's odd. 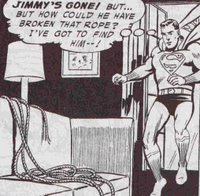 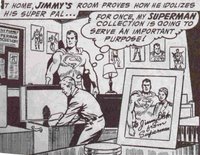 But they're laugh-provoking;
Yet they really don't know they're joking.

Don't you find
When love is blind
It's kind of odd.
Posted by Scipio at 6:35 AM

Neal Hefti's music for the Batman series was really great. A few years back, I had a CD of the soundtrack, and I loved it. The Batusi, Evol Ecdol, the Eil Albanian, Holy Diploma, Batman!

ok, now I have to get my hands on this collection just to see about the context of that rope.

"On November 13, Kal-El was asked to remove himself from his planet of residence; that request came from his father. Deep down, he knew he was right, and he knew that there was no way he could return to him. With nowhere else to go, he appeared on Earth, at the home of his "pal" Jimmy Olsen. Several years earlier, Olsen's "pal" Lex Luthor had thrown HIM out, requesting that HE never return. Can a young man and a Superman share an apartment without driving the neighbors crazy at night?"

Is it weird that I find that last panel rather touching?

What happened to poor Jimmy?

I don't care how great "Nananananana" is, that lyric alone should end in a death sentance.

Last panel- I think Jimmy's been blinded? He's sort of courageously looking off in the distance, which the Lifetime Channel taught me blind people do pretty often. Although he and his pal are holding each other closely in a very hetero way. I'm confused. I had no idea that artists in the 50's and 60's defied the Comics Code like this!! Way to fight The Man, repressed gay comic book writers and artists!

"Is it weird that I find that last panel rather touching?

What happened to poor Jimmy?"

Particularly since that isn't actually Superman; it's a crook in a rubber mask in a darkened cave.

A criminal in a rubber mask and tights, holding Jimmy close in a darkened cave?

That's both hot and wrong.

Man, I gotta get that "Showcase Presents" volume.

You DO realized that Superman is forcing Jimmy to wear horse blinders in the penultimate panel, right?

Oh, and I completely skipped the panels where's he's got Jimmy strapped up in a guide dog harness. Yes, really.

Didn't want to scare the kids.

Oh. And YES
those are REALLY the lyrics to the Odd Couple; I did NOT make them up.

The Odd Couple theme song sans lyrics is mankind's greatest achievement. With the lyrics - not so much.

If anyone has a copy of Metropole from the Soundtrack, please send it to me. I've been trying to get this song for a year now and I've run out of patience.