My new poll about finding a first name for poor, mononymous Mr Bones, has me in a nominal mood. T.O. Morrow; Roy G. Bivolo, Joe Coyne; I can't help loving guys with those wacky comic book names! So, I'd like to denominate my own favorite comic book (or comic book-y) names, then seek your nominations of your own. 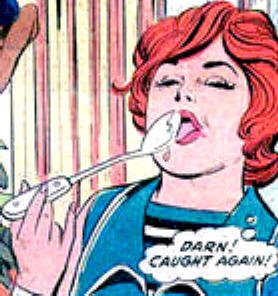 Marsha Mallow. You immediately know what she's like. Only Vandal Savage beats her out for Best Aptronym. I've always wondered why the two've never met. Perhaps in the current JSA Classified storyline she'll turn up. With her carefree "eat now worry later" attitude, she's just the person to befriend, bed, then help reform everyone's favorite "Type A" Neanderthal.

"Bony" Donut. Okay, there is no character named "Bony" Donut. But there really should be, don't you think? Some skinny girl sidekick, surely; but whose? Bullock? Maybe Wildcat.

"Con" Connors. A recurring grifter in Superman stories. "Gee, Jimmy; think we should trust him?"

Luis Lopez-Fitzgerald. Fine, fine. He's not in a comic book; but he's on Passions, which is kind of the same thing.

Cooky La Moo. If this woman is not in the new Wonder Woman at some point, there is no God.

Prof. Keenbean. Did you know that Richie Rich was the star of far, far more titles than any other comic book character in history? At one point, I believe, he was in 25 titles simultaneously, teaching us to be proud of the excesses of capitalism.

Tinya Wazzo. I don't want to live in the 30th century for the tech, or the excitement, or the interspecies culture. I just want to know lots and lots of people named things like "Tinya Wazzo" and run around making excuses to say their names all day long. "Hello, Reep Daggle; Querl Dox and Rond Vidar said you'd know where Tinya Wazzo went."

I know it's in the other universe, but I picked up the "essential" Godzilla collection last weekend, and it cracked me up that they had a helicarrier pilot named "Hugh Howards," complete with pencil-thin mustache, walking around in a safari jacket and a panama hat, smoking a pipe. (God, I can't believe how many people were allowed to smoke pipes and cigars on the deck of a (para-)military battleship in the '70s...)

I imagine him in a remote SHIELD outpost these days, shuffling around with tissue boxes on his feet and saving his toenail clippings until they send Nick Fury in to talk him out.

Hm. I clicked "Post a Comment" and the pop-up is in Spanish. Gone a little overboard with the Vibe theme, maybe? :)

Anyway, comic book names. Love all the Legion names; knew them all off the top of my head during the Grell era. Tinya is really good, but I think Tasmia Mallor beats her out. Alien GL names are also good: I mean, Arisia is just self-referential, but Tomar-Re? That's just crying out for Ricardo Montalban to sing a love ballad to his beloved avian alien. Whoa-oh!

My favorite secret identity name has to be Lamont Cranston. That's just genius.

Then there are the Bat Rogues. You mentioned Cobblepot, but what about E. Nygma? Too obvious?

It may have only been used in the movie, but "Jack Napier" is doubly clever.

But my all-time favorite has to be Harleen Quinzel(le). That's gold, my friend. Sheer gold.

Two of my favorite names are Marvel, too. Miguel O'Hara is great, because it tells you practically all you need to know about life in the year 2099. Ben Grimm is the other, as in being able to say, "Yeah, he's been grim before, but his mood's a lot better now" and puns of that nature.

There's got to be a good "Who's on First" riff to be had in Legion names.

For pure silliness it's hard to top Turner D. Century. Who was probably T. O. Morrow's college roommate or something.

Tinya Wazzo is great, but my favorite DC name is perhaps the most obvious - Mxyzptlk! I love the fact that somebody thought up that name, and decided the imp could only be defeated by saying his name backwards!!

There's a reason these characters have existed for decades...

Don't forget the woman who should be Marsh's bestest friend ever.. Etta Candy.

Michael John Carter. If only because you know what you are in for when there's somebody with two first names and man, does Booster live up to that.

At Marvel, Jack Russell is The Werewolf by Night.

Over at DC, when you name a child John Henry he becomes a Steel-drivin' man.

Perhaps, my favorite comes from Marvel. When you name your child Basil Ilks, dragon-y **** happens and you become The Basilisk.

I always liked Jack Russell (Werewolf by Knight), Johnny Blaze (Ghost Rider), Jubilation Lee (Jubilee- really!)but my favorite is Bucky. His real name is James Buchanan Barnes. If you're going to name your kid after a president, why not go with one of the worst? If created today, Captain America's partner would be Nixy.

Otto Octavius. Like they said in Spider Man 2, "A guy with the name Otto Octavius ends up with eight limbs. What are the odds?"

An estranged step-brother whose name is Cain Marko (aka Juggernaut). That's comic book goodness right there.

But the ultimate super hero name goes to the real name of the Silver Surfer: Norrin Radd.

This is probably a spin-off subject, but what about foreign names that are complete generics--that is, you want a foreign character, and you look in the encyclopedia for one of the most famous persons from that country and name your character after them (Kurt Wagner, Peter Rasputin). That's a little like naming a Jamaican character Something Marley.

There's also some "Hey, look at me!" names recaptured from fiction that make no sense: Destiny's real name is Irene Adler?

More on the subject: Jack Hart=Jack of Hearts. Cassandra Webb=Madame Webb. Anthony Druid=Dr. Druid. And the extreme of this: taking a superhero name that's your last name even though it doesn't mean anything: What a madrox?

Finally, is it just coinkidink that the only two Brazilian superheroes (Sunspot of the New Mutants and Fire of the Justice League) both have the same last name: DaCosta?

Too bad you don't have a write-in slot on your poll. Because I think the Director of the DEO should just get into a Sidney Poitier groove and say, "They call me MISTER Bones."

Either that or go with Leonard.

Nothing really beats Dr. Victor von Doom. Not a lot of other professions you can go into with a name like that. ("Assisting Dr. Franklin on your open heart surgery will be Dr. Doom!")

Also, why is Reed, an active physicist and professor, known as Mr. Fantastic, but Victor, the RULER of his own country who I believe dropped out of grad school after The Accident, known as Dr. Doom?

My word verification? "alasdr" Alas, Dr. A little too perfect.

Firestorm, of course, knew how to name it's characters; the "anything more than one initial is pure extravagance" school: Ronnie Raymond, Doreen Day, Cliff Carmichael, Louise Lincoln. Then they had to guts to give Doreen a sister and name her 'Summer'.

There must be many others that aren't coming to mind right now...

Dr. Druid's real name was revealed to be Anthony Ludgate in the Druid mini-series (around 1995), an early Warren Ellis book filled with disgusting imagry and an overdose of cynicism and violence. Not like his current work at all.

Which reminds me: Stephen Strange and Adam Strange. Anyone in real life have the last name "Strange?"

I have yet to run into a Mr. Doom, however.

Anyone in real life have the last name "Strange?"

A free non-existent coookie for anyone who can peg the original appearances of all 3 of these.

Some comic names I love:

Hugo Strange: For some reason, much much better that Stephen Strange or Adam Strange.

Sylvester Pemberton: I can't explain why I like this name either.

I also have to give an honorable mention to Lois Lane, Lana Lang, and Lori Lemaris. Apart, they would just be three alliterative comic book names, but together, they made some kind of a statement about the guiding hand of fate in Clark's life.

The Rogues have some of the all time great names: Leonard Snart, Digger Harkness, Hartley Rathaway, James Jesse, Eobard Thawne, etc. John Broome was either a genius, or got really lucky picking random names out of the phone book.

Also, I can't help but think that if we had guys named Sarge Steel and King Faraday running the CIA in real life, no one would ever mess with us.

Let's not forget the women: Harleen Quinzel? Come on. That one can't even hide behind the silver age--pure 1990's, baby.

Most of my favorites have already been mentioned: Etta Candy (that was her in Seven Soldiers: Zatanna, right?), Norin Radd, Blackagar Boltagon.

I love Monet St. Croix because it gets across both that she's a snobby bitch and vaguely foreign (Morroccan).

Zebediah Killgrave? A scary mofo who goes by the not-so-scary moniker "Purple Man". What were they smoking?

Harleen Quinzel IS a FABULOUS name, but Kevion Smith's daughter might find it burdensome on standardized tests.

re: Ben Grimm.....ohhhh my god I can't believe I NEVER GOT the "been grim" bit; I always thought it was just about the grim. Nice one, andrew..

I do love the old-school Legion names, they're all pretty cool.

I think my favourite comic book naming is of Marvel's USAgent: his birth name was John Walker, then when he had to fake his death the government changed it to Jack Daniels...hehehe.. =)

I think no one would mess with your military if your people had names like Colonel Fury, Sarge Steel, Commander Steel, and Sergeant Rock!

Not to mention this US Army General who showed up in the Jack Kirby run of "Captain America and the Falcon"...

Was he a hard-nosed, screw-those-lily-livered-fools-in-Washington, playing-by-his-own-rules, cigar chomping, enemy base destroying man's man?

Raygun Sharpadero. It's the name of an actual person and if it's not the name of some minor villain or henchman somewhere, then by the toenails of Neptune, it should be.

Funky Flashman - best name/character combination ever. (Although really, any name associated with the New Gods is probably pretty good.)

Johnny Onn later became "The Spot"- Johnny Onn, The Spot- named himself after a portajohn?

For a third time I'm breaking my rule about not commenting until I've read through the whole blog.

But with the Ditko mentions, I felt sure someone would've brought up one of his best:

And there are other greats, like Captain Nathanial Adam becoming Captain Atom or Cliff Steele becoming Robot Man. And isn't Clock King's last name Tockman? And I believe The Cluemaster had a funny alter ego too.