Lights Out for Hal!

Over the years, I have seen many sad and tragic things in comics, things that have made me openly weep: Black Canary's JLI costume; the Super-Cigars of Perry White; Aquaman #40. But none such have ever made me nearly as sad as one thing I have not seen... 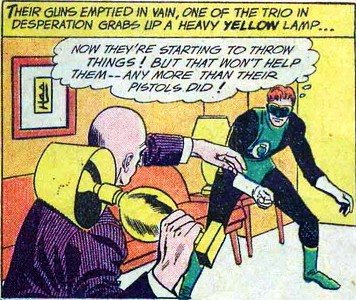 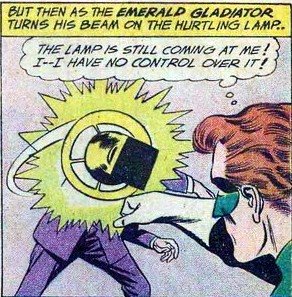 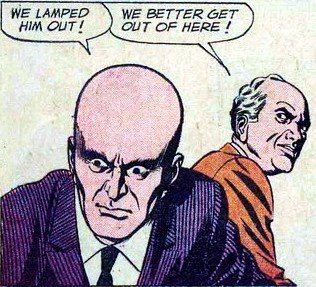 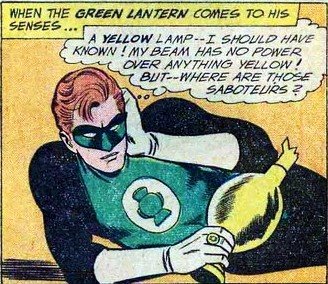 Can you tell what's missing from this sequence? No, folks, it's not an omission on my part, not a hoax, a dream, or an imaginary story. This is the one and only first original time Green Lantern Hal Jordan gets clonked on the head (by a yellow table lamp, no less) ... and IT HAPPENS OFF PANEL.

The gods and editors are cruel, so very cruel. They cut away in the third panel to the incredulous gangsters' reaction, so that we never actually see the blow to Hal's head, never get to see Green Lantern "lamped out" by a Yellow Lamp. OH, the Comic Book Irony!

I guess I shouldn't blame the editors of the day. This is Hal's first outing, and I'm sure they read the script and said, "Can't show the hero getting klonked on the head; too undignified; better make it off-panel..."

We the fans of Hal Jordan deserve restitution for this wrong. I demand a Green Lantern Secret Files with nothing in it but scores of drawings depicting the lamp's arc between panels 2 and 3, the look on Hal's face as it connects with his cranium, his stunned body thudding to the floor with the lamp beside, victim and victimizer, and of course the scene where he decides to eat the lampshade, just for revenge. That way, if you flip the pages, you'll see a little movie of Hal's First Head Injury ... over and over and over again.

It should also have a Who's Who style page profiling Hal's original archenemy, the Heavy Yellow Lamp, with its own logo-font and including a cut-away diagram, some background history on the lamp, and specs on its height, weight, and bulb wattage. I bet it has Olympic-level illumination and mastered a variety of Asian lighting techniques.

Then maybe there should be a small background story, full of foreshadowing, where the lamp gets bought at Ikea (that's where we learn it's true identity, something like "Jarnstra" or "Diabas"), placed in the living room, and begins to plot its schemes against all green lanterns, like the ones that used to make fun of it at the factory.

Then, as further compensation, I expect a replica from DC Direct. I'll have one in each room of my house; anybody gets smart with me, WHOMP, lamped out they will be.
Posted by Scipio at 5:39 AM

You are just begging for Crisis in Infinite Wattage aren't you?

There's such a thing as overly obsessive, even for comics fans.

A yellow lamp! Genius! Curse my short-sightedness; why didn't I think of it before?

Once again, you do us all a service. I hereby award you an honorary doctorate in the Mastery of Magnetism.

Wear it with pride, Doctor Scipio.

Geoff Johns is writing Green Lantern, so an explanation of what takes place between panels two and three will be an epic 9-part storyline featuring Power Girl.

Look out! Yellow lamp!
Man without fear? Man without
Reflexes, more like.

Scipio, how do you come up with this stuff? We totally need a Yellow Lamp regular title and a GL getting hit on the head title!

DO NOT give DC Direct ideas.

"We Lamped Him" is not
quite as dirty as it sounds.
"Hal's Head" kinda is.

Dude! You were so lamped.

Inducted? What do you think Sinestro is using as a Central Battery?

Apparently the necessary impurity in the power ring removed his "duck!", "get out of the way!", and "try to block the yellow lamp with your hands!" instincts. Or maybe it was just getting hit in the head too many times.

There's such a thing as overly obsessive, even for comics fans.
In a world where I can purchase my very own Buffy's Mr Pointy (I mean, at a comics shop, not just at the local Home Depot), this actually makes sense.

The special edition should also include a reprint of the first Golden Age Green Lantern story, and a replica of the legendary Wooden Club with which Alan Scott has a similar encounter.

Hm. The Wooden Club. Wouldn't that be a great name for Alan's rogues gallery?

Forget finding someone totally without fear. Perhaps the Guardians need to start picking Lanterns who aren't colorblind. How did he not notice that that lamp (which was apparently battery-powered) was yellow? How!?

I, for one, would like to see a HeroClix of the Yellow Lamp.

"Inducted? What do you think Sinestro is using as a Central Battery?"

Why is Hal rubbing the side of his head if he got nailed in the forehead? For an old bald guy in a purple suit, that unnamed thug must throw quite a curveball.

Just be glad it wasn't one of these lamps, or Hal would date it, too.

You know, it's not too late for DC to redo Infinite Crisis #7 to reveal that the Heavy Yellow Lamp was the real mastermind behind the whole thing. I mean, sure, they'd have to pulp several thousand copies of the original version, and delay the final issue for weeks, but I think it would make for a much better ending.

"The lamp is still coming at me!" Geez. And yet Kyle's the one who gets no respect. Go figure.

... How does one forget about the one weakness seperating him from nigh-omnipotence and mere super-hero-hood?

I just got the Green Lantern Showcase edition thingy, reprinting Showcase #22 - #24 and Green Lantern #1- 17. If you have it, Scipio, you are showing great restraint by not bagging on pretty much every panel.

WHAT'S WRONG WITH YOU?

Oh, I do, I assure, and much of it has appeared.

But I can't let Hal completely take over my blog, now can I?

She is the acting CEO of a modern aeronautical company, a major component in the battle against World Communism. How's that for a modern woman? Yet, she also feels that she will judged differently as a woman than if she were a man, so she has sworn off romance until her father returns to take over the company again. (What would Betty Friedan say?)

(I could comment on how silly she is, but she's not any sillier than anyone else in Silver Age DC Comics.)

On top of that, she is the mortal reincarnation of an intergalactic race of Amazons who are contemptuous of men. These Zamorans give her the power of the Star Sapphire and give her the name of a Golden Age Flash villainess so she can defeat Green Lantern and thus show what a weenie he is, convinving her that she should leave Earth to become the Zamoran queen.

What is up with John Broome? Did he have mad cow disease or something?

Oh, wow. Thanks (I think)! Totally not worthy.

... but, at the very least, I want some variation on "We lamped him out" as part of the Sinestro Corp Oath.

"Let all who worship Jordan's clout/
Know for certain, we lamped him out."

Something like that. I'm sure you can do better.

"Wooden Club" of course was the Golden Age father of Silver Age "Yellow Lamp". It's all written down in the Untold Legends of the DC Universe Special No. 11 "Bring on the Lame Ones"

Well, I would buy it.

I now have "Mama said lamp you out" running through my head incessantly, and I blame YOU, Hal Jordan!