One year ago, I was no longer alone in the blogosphere.

My friend and colleague Devon Sanders is one of the best prose writers I know, certainly better than I. But his sterling reviews of comic books were languishing in obscurity. Oh, as you would expect, they were being published on line, and at a famous site. But it was one so large that occasional features, like his reviews, despite their quality, could go unnoticed.

All that changed exactly one year ago when Devon struck out on his own and created what you know now as Seven Hells, the Absorbascon's "cousin". Taking after its author, Seven Hells is manly, two-fisted blogging with a refined urban style; not without reason are Hawkman and Wildcat its "patron heroes".

Devon doesn't go unnoticed any more! So busy is he hanging with the like of Kurt Busiek, Brad Meltzer, and Jimmy Palmiotti, that he can barely spare time for guest-spots even in his favorite books like Manhunter: 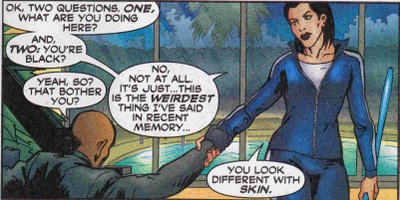 OK; two questions.
One. What are you doing here?
And two. You 're black?

Forget Pinhead; to honor the Seven Hells blogoversary, I present the never before seen face of the author of your Seven Hells of pain, of pleasure: 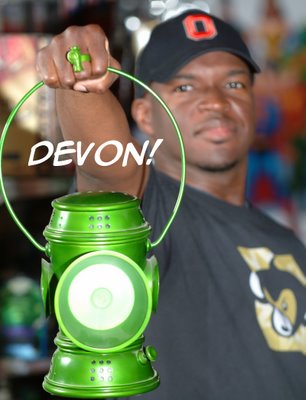 I'm not good enough a writer to compose a haiku in honor of this event.

Dropped on his head
Remember that the next time
You read "Seven Hells!"

Devon! Love his blog!
Does he get bopped on the head
As often as Hal?

Devon: poking fun
at kyle raynor for a year
without exposed thighs

damn fine lantern, sir;
it's a shame it is paired with
such an awful hat.

By the Seven Hells!
Someone stole Alan Scott's
Green lantern and ring!

You may mock the hat,
at least he has the sense to
wear matching colors

Not to get too far away from comics, but is that an Ohio State cap on Devon's head? Go Bucks!

In brightest day, in
blackest night, no Rayner goof
shall escape his site!

Ohio scarlett?
Or Oklahoma orange?
Picture not quite clear.

Regardless, Devon
Thanks for shining your light on
the Kyle kiss of death

You want this lantern?
You'll have to pry it out of
My cold dead hands.

Actually, Devon sold it the next day...