Ah ha! It is I, the Killer Moth, the anti-Batman, come to haunt your nightmares! 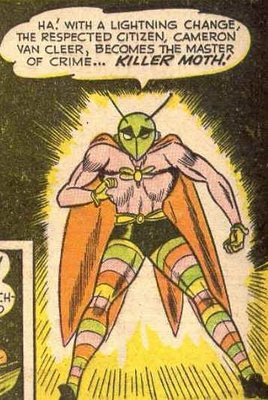 Decades before there were pretenders like Deathstroke or Prometheus, there was I ... I, the Killer Moth! With my Mothsignal and Mothmobile, I protect criminals from police predation and vulturous vigilanteism.

Sure, it's a gas-guzzler, but the ladies love it!

So, today I offer you some advice on How Not to Get Caught By Batman. I'm going to reveal some of the contents of my Futility Belt, so called because it renders useless the upholders of law! Ha! Ha ha! That appeals to my Golden Age sense of humor; Joker -- call me!

I have been asked to review some of the proper implements for protecting yourself from the Caped Crusader, some of which you have previously seen here at the Absorbascon, which I, the Killer Moth, am gracing with my criminal presence. Here are some of the proven tools that I, the Killer Moth, recommend for stopping Batman. Consider carrying them for your own supercriminal protection! 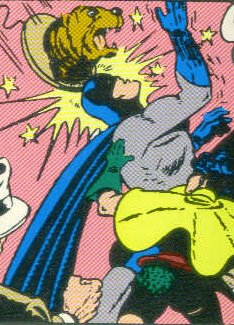 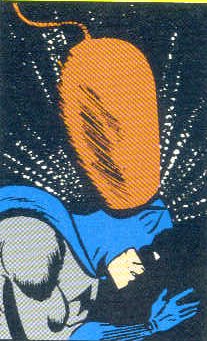 Difficult to aim, but a successful attack writes its own punchlines!


A Bottle of Perfume 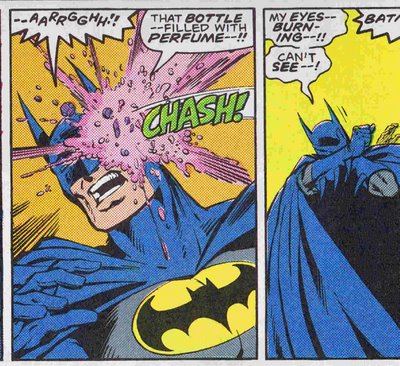 Also comes in hand with the ladies, when you're "Lady-Killer Moth" as I am! 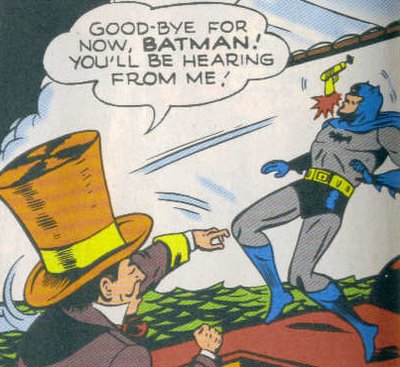 Innocuous looking, but ...! It's all in the wrist. 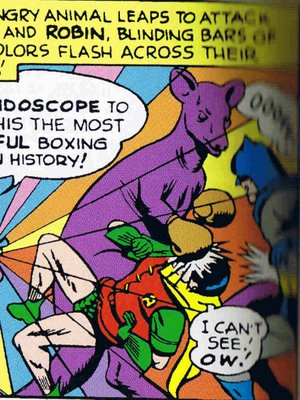 I, Killer Moth, can get them for you wholesale! 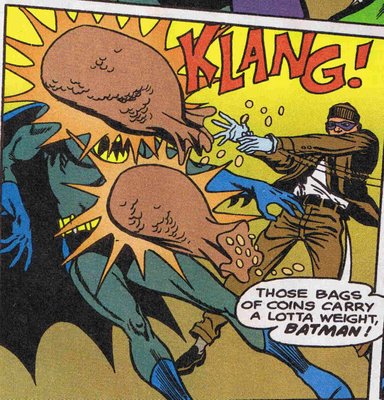 Also useful in parking meters; nothing is more embarrassing than having the Mothmobile towed. Well, with the possible exception of having Batgirl knock you unconscious with a penny loafer and leave you splayed on the steps of the Lincoln Memorial. Or being deceived into thinking that the Boy Wonder is actually is the offspring of an alien avian race. Or being portrayed by Tim Herbert. 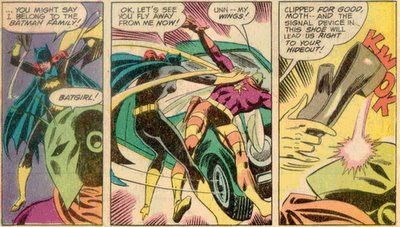 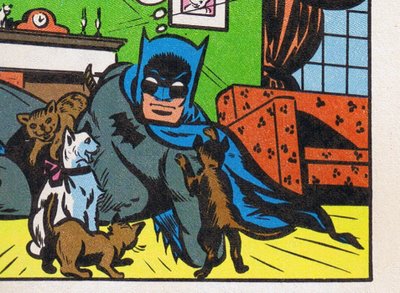 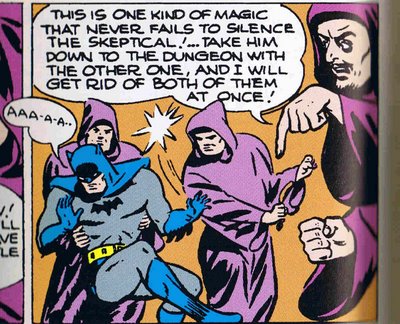 Surprisingly effective and embarrassing. They will give him such a slap!
Posted by Scipio at 10:59 AM

I now have a goal in life - to build Killer Moth's Mothmobile.

It's funny how, once one finds out that Killer Moth set out to be the anti-Batman, that costume suddenly makes perfect sense.

Oh, and Batman has a (presumably) glass bottle shatter on his left eye and he's worried about the perfume?

Yeah, well, anyone who's seen him around Catwoman know Batman's totally pussy-whipped.

Moth against bat? Prey against predator? Brilliant! Does Catwoman have a mouse foe, or Black Canary (or Jade Canary?) a foe made of seeds (sort of like Marvel's Sandman?)

If not, they totally should...

That's not what I've heard, sailor!

And I have a new goal in life, too. I'm going to start a band called Purple-Robed Pansies. Our first album will be titled "Armed with Corndogs." Or maybe I'll do it the other way around. Either way, how can I lose?

Apparently Hal Jordan was getting hit in the head too often and some of it spilled over into Batman's title.

Yay! A return to those great "Batman getting clocked" posts of yore. It never caught on as much as Hal Jordan's head, but I feel Bat-fans still need a reality check concerning their hero.

(On some board somewhere, people were arguing whether Superman in "Justice" should have been able to punch out a mind-controlled Batman. Sheesh!)

Give me a break! Aunt Harriet could clock Batman!

In fact, it's a rule. Everyone gets to punch him once in the face, no questions. I think Batman says that exactly to the Punisher in their crossover (the Chuck Dixon one, actually pretty good and considered canon in DC Continuity!)

The hard part is doing it twice.

This makes me all misty-eyed for the days when Peter Milligan wrote "Detective" and Batman couldn't walk across the street without pulling a hamstring or shattering his pinky toe.

You know, this gives me the opportunity to point out how the hypercompetent Batman of the JLA, the one who plans everything out and is never surprised by anything that happens, ever, because he already thought of it and came up with a countermeasure, kind of irritates me. I mean, some of my favorite Batmemories are ones where he finds himself captured and having to use his epic-level escapology skills. In those days, Bruce couldn't order a bagel without suffering head trauma sufficient to have him wake up, trussed and suspended from the ceiling over robot crocodiles, six hours later. Then you got a quick and occasionally not entirely incorrect chemistry/physics/biology lesson while Batman had to use all his skills and knowledge to bust free. That was drama writ large! I distinctly recall one issue where some guy -- just some jock type, no special skills or anything -- knocks him out from behind and chains him in a junkyard with a WEREWOLF! And Bruce headbutts the werewolf over his own head using some exotic application of judo then goes back to picking the manacles with a paper clip held in his teeth! A totally Airwolf scene, which we can never see these days because God knows Batman can't be struck by mere mortals.

Think I got a little off track there. Anyway, I liked when he could still be surprised, although I will admit that given the amount of times it happened he got pretty lucky with people not bothering to remove the ol' cowl. Which must have been why he decided to install the tiny cowl-jets to squirt knockout gas on anyone who touches the mask.

Save me from sci-fi Batman.

You know the best thing about the cats? In Batman Family, Tim throws the poor dead lady's cats at the assassin to fend him off.

Ha! This is hilarious! Despite Killer Moth being the greatest supervillain of all time, it's great to see he has a sense of humor.

I saw that short and Tim Herbert truly sucks as an actor. What's with the squeaky voice?