I miss this woman. Can you still recognize her? 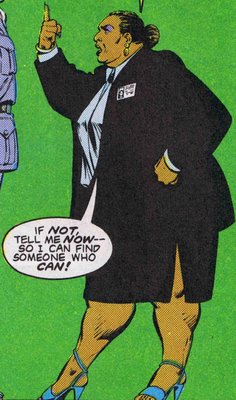 Somewhere along the line, she was replaced by some sort of "mini-me" one eighth her original size: 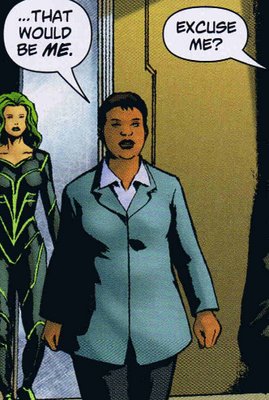 The real Amanda Waller, girlie, eats people like you for breakfast, figuratively and literally. You are, at best, Amanda's lesbian daughter who's a principal at a private school. You have no hairbun, no earrings, no purple eye shadow, no cerulean heels, and no calves the size of black angus bulls. You are a mere slip of a girl; the real Amanda Waller can be spotted from space without using Brother Eye and lights up not merely rooms but entire football stadiums with her fabulous presence.

You are merely another symptom of DC's on-going putsch against fat people. Etta Candy and Alfred Pennyworth, sent to a fat farms. Doiby Dickles, shipped off planet.

Vulko, sleeping with the fishes. Chunk, disappeared. Tubby Watts, erased. Uncle Dudley, forgotten. Orca the Whalewoman, her glorious life completely covered up in a society-wide conspiracy to pretend she and Larry Hama never existed. Marsha Mallow cries out, "My editor, why hast thou forsaken me?!"

Ironically, fat characters may be the victims of the PR campaigns of real fat people. Yes, I said, "fat people", not "big" or "plus size" or any such euphemisms; sue me. [Of course, nowadays, some people will sue you for using the word "big", but that's another story.] The media, stung perhaps by criticisms of their common use of fat people as comic relief, have, in some cases, come up with a simple answer; "Fine; rather than risk showing fat people in a bad light, we simply won't show them at all."

For whatever reason, though, fat people are now virtually absent from the DCU, furthering the illusion that, while New Earth may not be perfect, its abdominals sure are. Why, nowadays you could scrub your laundry on Perry White's rippling torso, so successful has been DC's campaign against Mr. Roly Poly.

DC! As you've recently proven, the vast expanse of the DC Universe has room for characters of every stripe and flavor. Isn't it large enough to have room for some fat people, too?

Next time you show me Amanda Waller, please make it the real one. 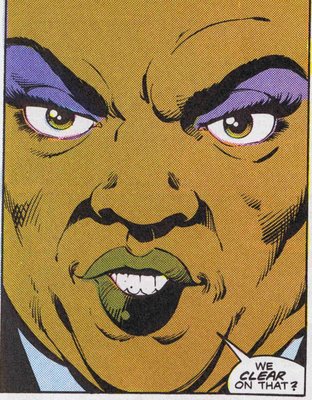 The Real Amanda Waller moved up in the world to star in the second season of Justice LEague Unlimited. She was NOT merely plump there.

(That said, The Wall lost a great deal of weight during her prison term in the Ostrander run of Suicide Squad.)

Amanda was in jail? I'm still only midway through my Suicide Squads.

"Why, nowadays you could scrub your laundry on Perry White's rippling torso..."

I have, and ya know, it really does work. Though you have to be careful which detergent you use--if you use "Cheer," he'll get a rash.

There's a tendency in comics for characters to prettify as artists change, it seems. Each new artist makes a small tweak, and lo, twelve artists later The Wall looks like...that.

Occasionally a character will be introduced with a big nose, protruding brow, or some other deviation from Comic Book Normal. But it never lasts. To bring back the laundry idea, after being washed by different hands, the unusual bits of a character fade.

Do you think in another twenty years she'll be a rippling-ab supermodel amazon with a jet pack and a cyborg gorilla sidekick? I'd say the chances are 50-50.

I so want to see Amanda Waller with a cyborg gorilla sidekick.

Originally, I was able to recognize Maggie Sawyer easily, because of her nose. Okay, the ridiculous cigarette holder and leather miniskirt were also useful clues.

And let's not forget the deep dark soul!

I mean, I'm a sucker from the brooding dark types.

While I too miss the days of Amanda Waller's three chins of power, I don't mind the slimmed down version that much.

Makes me wonder, though, does Batman have a secret plan to bring down Waller, like he does everyone else? And if so, does it involve having pizzas sent to her home every night in order to send her spiraling her back into obesity?

But it seems as if you forget a very important member of the Still Fat Society -- none other than Mr. Woozy Winks, still around and still very round.

Speaking as a fat person, I want you to use the word fat. Not big, not plus-sized, FAT FAT FAT. It's not a dirty word! And it's what I call myself.

New Waller ends up looking a lot more like Oprah now. Maybe its a sign. Now that artists have a public, powerful black woman who gives ulcers to people instead of getting them, they sort of naturally find themselves modelling her.

Also, God forbid that they find themselves putting forth fat role models during our time of national health emergency. Hurt feelings schmeelimgs, I bet they're afraid of parents' groups coming down on them for promoting obesity by making it acceptable.

You know, outside the US, that's what passes for fat. Only in America people hear 'fat' and think 'round as a beach ball'.

When she showed up this season on Justice League Unlimited I commented to my friends that I felt they were drawing Amanda Waller "too hot."

This got laughter and derisement and wasn't taken as the serious topic I meant it to be.

Instead, whenever she appears on TV now, my cheeky friends say things such as "Ooooooh, Its your girlfriend!" and they make kissing noises and junk like that.

We are a very mature bunch.

I find the real Amanda Waller quite hot.

Can anyone post a picture of Amanda Waller swallowing a thin, blonde lady in a red dress? Or the other way around? Either will work.

Well, well, well... no longer I made a comment on another post where I eufemistically called myself "big" that I come across this one.
So out of the closet it it! Yes, call me fat ( formerly so, I was Amanda-ed in real life due to health issues ).

And I also loved Big Amanda, cause she was brasher...the slimmer one is the usual conniving bitch, but Fatmanda was BRASH!.