Those of you who read Justice (which should be all of you, by the way, because it's fun, even if, as always, it's impossible to see what's going on because Alex Ross is drawing it) may have been confused by the Cheetah's mention of "Hercules' Lament" when she scratches Wonder Woman with her poison-tipped claws. Be confused no more; it's a reference to the myth of the death of Herakles. 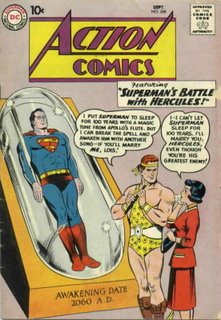 Herakles, as you probably already know, was sort of the Superman of the ancient Greek myths (except he wasn't nearly as nice as Superman). Nowadays, superheroes are often aliens or metahumans. Ancient myth had something similar, as its heroes were often "demigods", the offspring of a god and a human. [There were also some heroes who were fully human, like Odysseus, the Batman of the ancient world, who relied on his ingenuity and adaptability to accomplish great things. Odysseus, like Batman, rocked.]
Demigods were usually more powerful than regular humans (sometime even getting a special ability, like prophecy, flight, or telescopic vision; no, really!), but were still mortal and could be killed. Herakles (or Hercules, as the Romans called him) was the big kahuna of the demigods; if you got into a fight with Herakles, you lost. If your army got into a fight with Herakles, it lost. That's why most of his exploits involved fighting monsters (like Superman in the 1980s and 1990s) or using his abilities in clever ways to solve seemingly unsolvable problems (like Superman in the 1950s and 1960s). 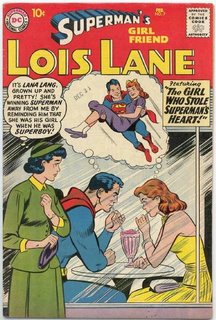 Early on in his career, he hung out with his nephew and "boy pal", Iolaus, who was yer basic Jimmy Olsen (complete with cryptohomosexual undertones), except that Iolaus was occasionally useful (such as when he helped kill the Hydra by cautering its necks when Herk lopped off the heads). Later, Herakles gave Iolaus his ex-wife (Megara = Lana Lang) to marry. That is so Superman Family, it's creepy.
Still, later Herk finally landed his "Lois Lane", spunky warrior princess (a.k.a. "gal reporter") Deianeira, daughter of Oeneus, king (a.k.a. "editor") of Calydon (Oeneus means "wine guy", because he learned winemaking from the god Dionysus himself; no, really!).
Once Herakles marries Deianeira, that's where the Lamenting comes in. Kind of like Lois. Herakles and Deianeira were out a-wandering (like heroes do) and came to the river Euenos, where a centaur named Nessos was the ferryman. I guess that's what retired centaurs do; better than giving pony rides to the spoiled children of satraps.
So Nessos starts to carry Princess D across and realized, wow, she's a total hottie, and starts to, ahem, "carry her off", which is what they called it in those days. Well, Herk bridled at that sort of horsing around, and shot Nessos with one of his arrows. This hurt even more than you'd think, because all of Herakles' arrows had been soaked in the poison blood of the Hydra (Editor's Note: the monster Iolaus had helped him kill long ago, in Ancient Action #CCXIV!). 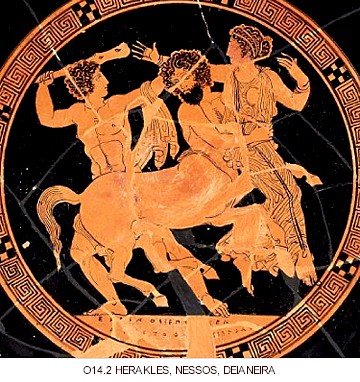 So as Nessos lays dying, he goes, "Oh, I'm sorry about molesting you; pardon my hot-bloodied centauriness! Let me apologize by giving you the recipe for a love potion made from my blood and some other stuff I won't mention because this is a family blog! It will ensure Herakles remains yours, just as he has ensured you will remain his by shooting me with this really, really painful poisoned arrow that's killing me even as we chat."
Deianeira, being pretty much as stupid and insecure as Lois Lane, falls for this line of hooey. See, because people who read comics know better than that, reading comics keeps you safe from vengeful dying centaurs and other of life's little dangers, so buy comics for your kids, folks.
Anyway, Princess D makes the potion (which is obviously poisonous, duh, since it's made from the centaur's poisoned blood) and soaks Herakles' tunic in it. What happens next is not pretty. Picture if Lois got really ticked at Clark and soaked his supersuit in kryptonite krazy glue.
Herakles' servant Lichas (who was like Kelex at the Fortress of Solitude, except for not being an alien robot) plops the outfit on his boss and, oy, the lamenting begins. Herakles, in torture, orders Poeas (another servant guy) to build a funeral pyre that Herk throws himself into to stop the pain, an extreme but effective solution to his problem. His mortal essence burned away, but his dad, Zeus, took his divine essence up to Olympus, where Herakles became a full god (much to the annoyance of the many many relatives of the many people H killed on earth; just ask King Priam in Age of Bronze how he felt about that).
Before Herk kacks himself, he gives his magically unerring bow with its poison arrows to Poeas as a going-away present. Some people claim he really just said, "Hold these, Steward," with gritted teeth, but those people are just jealous, I say.
Poeas passes the bow and arrows on to his son, Philoctetes, father of podiatry (don't ask). Philoctetes turns into, well, Green Arrow, a bitter misanthropic crank who smells funny and learns to use the bow and arrow when he's stranded on a seagirt dirtpile.
The Trojan War is mytho-history's greatest crossover, starring a Justice League of Greek Heroes.  Phil becomes extremely important in the Trojan War (even though you've probably never heard of him), due to one of those absurd Silver Age Justice League story contrivances, where the rest of the JLA is helpless until GA can hit the button on some console with his boxing glove arrow, so everyone puts up with him. Philoctetes is exactly like that; the Greeks know they can't defeat the Trojans without him. If you want to know why he's the key to "Death Rides a Wooden Horse!" either read Sophocles' play about it or subscribe to the comic Age of Bronze, where I'm sure it's going to come up at some point.
A great ancient source for the story of Nessus is the Library of Apollodorus (which was the ancient world's History of the DC Universe and a very groovy read), something every civilized person should have in his library.
So, that's the poison the Cheetah (who's clearly a total nutbar) says she got from the queen goddess of the underworld (Persephone) and is using on Wonder Woman, who naturally enough thinks, "You are clearly a total nutbar, but, gosh, yes, this does sting." Well, I figure there was at least one person who didn't get the reference, so there it is for ya. Because comic books are like myths: you don't need to get all the references to previous continuity to enjoy the story, but it helps.
Posted by Scipio at 9:07 AM

Me, too--I was really surprised at the reference. This guy's who writing "Justice" is great and I hope they can get him on a regular title at some point.

There were also some heroes who were fully human, like Odysseus, the Batman of the ancient world, who relied on his ingenuity and adaptability to accomplish great things.

Does that make Argos the Ancient Ace the Bat-Hound?

Great explaination of the reference. And thank you for using "Herakles"; I think you're one of the few who actually recognize and use the name.

Greek mythology was what I read before I knew comic books existed.

So Circe and Calypso are, respectively, Poison Ivy and Catwoman, yes?

Or is the other way around?

"So Circe and Calypso are, respectively, Poison Ivy and Catwoman, yes?"

Man, if you had taught a classics class at Michigan State, I totally would have been one of those geeky kids who hung out at your office hours. This is the kind of stuff I come to this blog for.

"This guy's who writing "Justice" is great and I hope they can get him on a regular title at some point."

Yes! At whatever point they start publishing it again...

You're right, I hadn't heard of Philotectes, but sounds interesting. I didn't even know Iolaus had any basis in the myths, I thought he was created for that Sam Raimi show. Still, my question is: why does Wonder Woman hate the DC Herakles? I was raised with the Marvel Hercules (good-natured, violent lout), so it's a little jarring for me. And it's not the same Herakles Walt Simonson drew with the lion kneepads, right?

Why does Wonder Woman hate Herakles?

Because one of "the Labors of Herakles" was to get the girdle of Hippolyta. To try to take it by force would have got him lots of his men, so, instead, they seduced the Amazons, then enslaved them as they slept.

Hercules personally seduced the Queen of the Amazons, Hippolyta. Diana's mother, ya know.

That's all classical. DC took the myth further; the "bracelets" the Amazons are required to wear by the gods who saved them are reminders of the fetters their gullibility led them to.

This is a family blog?

Scipio, this is amazing and fantastic. For some reason I never dug the mythological Herakles much (nor his comic book counterparts, for that matter), but this has made me want to go pick my old Hamilton's Mythology and check it out.

Way to class up the Internet, Scip. You've made me realize I need to go back and refresh myself on my classical mythology. I, too was a myth nerd before a comic nerd. DC = Direct Correlation, perhaps.

If you've already got Superman, Batman, and the Green Arrow, you might as well do the rest of the League. Daedalus as Hawkman? Perseus as, uh, Aztek? (Provided special semigodly artifacts to use in a fight against villainy and monstrosity, ultimately fulfills prophecy to kill his archnemesis--it all sort of fits!)

Alex Ross doesn't draw Justice, Doug Braithwaite does; Ross paints over Doug's pencils, which is why it looks more fluid and not as stagnant.

"I didn't even know Iolaus had any basis in the myths, I thought he was created for that Sam Raimi show."

Gosh, that makes me sad.