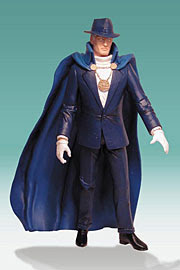 I wouldn't mind an affordable Spectre, something like 150 points or so that could go on a JSA team. His special ability would be "Judgment - Roll one 6 sided die. On a result of 6, a single adjacent enemy character of equal or lesser value is automatically eliminated from the game"

I also would love an Amazo who could actually copy powers and stats of enemy figures, although I don't quite know how to keep that affordable.

Well th only one I can think of right now is Batman's "Batarang up the nose". For the first three clix, Batman rolls crits on 10-12, and on a 12 he can choose to negate a power on that clik.

This represents the axiom at my house that. "It's hard to x with a batarang up the nose" (when x equals power or ability that people generally insist would be a threat to Batman, bah).

I, too, would like a more down to earth Golden Age Spectre, and "Judgement" sounds like a good way of keeping his reasonable but still retaining the fear that at any moment he might just cause your head to explode.

As for Amazo, just give the same kind of rainbow costly dial he has now... then add "At the start of his turn Amazo may replace any of his powers with any power of any opposing JLA figure within his range."

Since he's already got a dial full of expensive powers, switching some out doesn't really change his cost, just his versatility.

That should do it.

I don't actually play HeroClix, and you are making me very sad about it. I'm not sure why I should find reading about a game I don't play so satisfying, but there you have it.

I do have one Plastic-Man-as-Mailbox HeroClix piece that I adore, but that's it.

Dr Thirteen would totally be immune to Phantom Stranger's Smack Talk, though, and would counter it with Totally Logical but Full of Crap Theory That Ignores What We Just Saw.

I was thinking with Spider-Man, a lot of times he confuses his opponents by jumping around them and attacking from seemingly all directions. So call it Spider-Agility and have it lower their defense (or attack; they're too befuddled to strike as accurately) value by one on a roll of 5 or 6.

You could apply something similar to the super-speedsters.

Mr. Mxyzptlk is basically impossible to do in Clix right now, but you could simulate his powers with the new rules. Here's my idea: "5th Dimensional Magic - Roll one six sided die. On a result of 1 or 2, Mxy deals one unavoidable click of damage to all enemy pieces. On 3 or 4, move all enemy pieces anywhere on the board. On 5 or 6, give all allies Shape Change and Stealth for one turn"

They also have to do something with Two-Face and flipping a coin, although I don't have any good ideas myself.

I went to the article about the Justice League set and I didn't see any mention of Phantom Stranger; just Deadman, Lobo, and "a certain loud-mouthed member of the Green Lantern Corps" (that could be just about any of them).

I know nothing about playing the game, but I would suggest some kind of "omni-gadget" ability for Green Arrow to represent his variety of special arrows.

Ooo, Jon, cool. Except it might make Mr. Mxyzptlk too powerful.

How about a Special Vulnerability? Like, if someone makes a successful Outwit against Mr. Mxyzptlk (makes him say his name backwards) he's removed from the game.

The 5th-dimensional imp could do a lot of damage at the beginning of the game, but as soon as someone both has Outwit and is within range of Mr. Mxyzptlk, he can be taken out.

Iznat kinda the whole quintessence of Mxyzptlkality? Dude's way too powerful, plus unpredictable, plus the hat. That's the whole concept in three notes. Mxyzptlk oughtta be able to do lots of stuff that nobody whatsoever can do anything about, only in mostly-goofy ways that are often completely harmless.
Hm, okay, I guess I do see the problem...