"Haloes belong with the angels, kiddo..."

As some of you may know, the fabulous new DC Heroclix set, Origin, came out recently. In my part of town, we celebrated publicly with a marquee tournament at Big Monkey, whose highlights included a player pulling one of the four extremely rare "chase" figures (specifically, Hippolyta).

Privately, we debuted the set at my house last Monday with a heavyweight grudge match between Devon "Charge is My Middle Name" Sanders and Glen "My Plan Can Only Fail If I Roll a Two" Weldon.

It's always a clash of styles between those two. Devon lurks behind trees, then leaps out screaming to smack you in the face with some sacrificial berserker; once the damage is done he sends out his Untouched Secondary Attacker he's been holding in reserve to KO whoever remains. Meanwhile, Glen, who was graduated My Great Attack-a from the Wile E. Coyote School of Strategy, is preparing byzantine four-part maneuvers involving a minimum of three mental powers, two feat cards, one team ability, and a Dane Dorrance pog -- schemes so brilliant, in fact, that they can fail only if Glen rolls a 5 or less twice in a row, which he does almost every turn.

When Devon laid out his team on the board -- Wildcat, Hawkman, Catman, Blackhawk, and Mister Miracle -- he feigned to be innocently composing a team entirely of figures from the new set. But it was obvious what he was really up to: it was one of his Testosterone Teams. If you know Devon's style of play, his merely placing those figures on the board said: "I am the Dale Gunn of Earth Prime and your team is about to be drowned in Aqua Velva."

Glen, just as subtly, said simply, "Oh; well, then..." and placed his team on the board:

Supergirl, Wonder Girl, Triplicate Girl, and Halo, saying, in essence, "I can trounce you with a team of teenage blondes."

I knew what I needed to do; I removed the breakables, sent the dog to the bedroom, and got a pad and pen to take notes with.

The Girls dealt the Boys a swift initial smackdown. In their opening salvos, Halo and Supergirl kayoed Devon's avatar, Hawkman; meanwhile, Glen, master of psychological warfare, sipped his cosmo and chatted about manga influences in Miss Martian's costume design. The whole thing couldn't have been better calculated to demoralize Devon, although I thought Glen went too far when he blew his nose on an issue of DC Presents Lady Cop.

Who needs to go see 300?, I thought; this is a battle. Glen's Girls had additional successes; Halo blasted Wildcat for 3 clicks and Blackhawk for 5, proving that war is Halo. 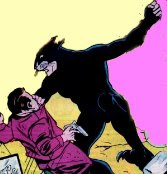 But, much to his credit, Devon kept his cool, ingeniously using Mr. Miracle to make the Girls vulnerable even to attacks by his weaker characters, like Catman and Blackhawk. A lesser man would have given up; I surely would have, and at one point I urged Devon to concede that he had lost. But he persevered and, through clever use of his figures, wound up with his last one, Wildcat, kayoing Glen's last figure, the upstart Halo.

Heroclix is more fun when you play theme teams, rather than just teams designed perfectly for winning.

What? You were expecting, "Never give up; never surrender"?


Anyway, this post introduces a new feature here at the Absorbascon: Theme Teams on Parade, in which I will offer Heroclix Theme Teams of my own devising. Look for it.
Posted by Scipio at 8:22 PM

I love theme teams/decks in games. My friends and I used to play theme deck days every couple of weeks back in college, depending on whichever game we were all playing that month. My all time favorite that I put together was an Illuminati: New World Order deck consisting of nothing but police agencies and space agencies/events. "PIGS IN SPAAAAAACE!" My second favorite, another INWO deck, was probably the deck that created the shadow council of Big Alcohol, gay rights groups, and Texas: Beers, Steers, and Queers.

Argh! That's what I meant to do this week!

Every Thursday, my LCS holds Heroclix games after hours. I never go, but this is my Spring Break, so I figured I would go and learn how to play properly. But I forgot! Again!

I even got my income tax refund this week, so I could have picked up a couple booster packs. Darn...

Oh, and Devon needs a custom Lady Cop figure. Glen's team of blonde girls wouldn't go after one of their own.

You have been warned before.

I think Scipio gets a cut from WizKids for every one of us whom he converts.

They pay him in pogs, though.

My 3-year-old is currently in my lap. He looked at your banner and proudly recited the heroes... "Jonn Jonnz! Hal Jordan! Flash! Batman! ...um... Daddy, who's that guy with the Justice League?"

Anyway, theme teams are the ONLY way to play.

Theme teams ALWAYS make the game better. I once ran a "Shadowpact" team, with Blue Devil, Ragman, Enchantress, The Demon, Mary Marvel, and Detective Chimp. Not exactly the most dangerous looking team. I managed to beat a friend who fielded Ares, Darkseid, and a pair of parademons. It was a lot of fun.

The tricky part is getting a Theme Team that can actually hold its own against a Primed-For-Optimum-Turbo-Death team, of the kind favored by the precocious 13 year olds at the venue I play at.

It's not impossible, but it can be done -- but I agree that getting folks together who all play theme teams is FAR more fun.