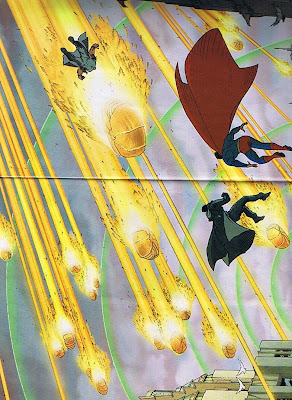 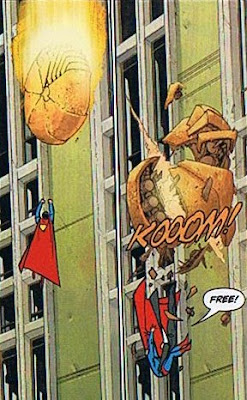 One thing, though, does leave me puzzled, which is the Kryptonian sense of design. Structures based on crystal generation? Iris-patterned prisoners? For people supposedly so divorced from nature and the environment, their design sense seems to be rooted firmly in natural phenomena as opposed to abstract geometrics... . Do you think they have the Athramites do all their decorating?
Posted by Scipio at 9:42 AM

Did you happen to read the Action Comics Annual that came out last month? That has all the multi colored Kryptonite you can shake a stick at, plus the overall feel of a Silver Age 80 pg. giant. I don't want to spoil it, but it sets up what looks to be an amazingly fun year for Superman.

I have to agree with you on this one, Scip. After the misstep with Bizarro, Johns and Donner have forced me to put my "I am So Sick of General Zod" post on an even longer hiatus, because this is the best he's ever been (barring perhaps the Donner cut of Superman II).

I agree that I love the pacing of the storyline, my only problem (and it's not even a problem, more of a worry), is that with a few dozen Kryptonian criminals running around on Earth, you'd assume that basically every hero who's not busy will either have to fight them or come up with a very good excuse.

And then of course since they're fighting Kryptonians, there'd be a very high body count.

So I'm worried that either this storyline will be wrapped up insanely quickly, or else we'll have to pretend for awhile that Superman is the only superhero on the planet.

For me this issue felt like Steve Gerber's Phantom Zone mini-series was making a cameo. I was tickled.

Glad to see you're back. As always, love your articles.

I agree. The Kubert art is jaw droppingly gorgeous, exactly as it should be with superhero comics.

And I think that we just recently witnessed Zod (Ursa and Non too) getting an intersting retcon in the pages of Action Annual #10.

Riddle me this: What brand of shirts do Kryptonian generals wear?
Answer: "I, Zod!"

I know it gets no love here, but I always loved Byrne's Krypton designs and was sorry to see them go.

Now, I am a recovering Superman hater, so I haven't read the comic. So, could you tell me if they explained how it took Cal-el his entire childhood to get powers, yet the criminal-filled donut brigand all have powers right off the bat?

I'm also enjoying this storyline. The delays between issues have been uber frustrating though. I truly enjoyed the last issue and the motivation for Zod and his flunkies was well done.

You're quite right this does have a very Silver Age feel to it but it's always good to see a simpler and faster paced story compared to the other books i've been reading. (BATMAN, DETECTIVE, SUPERMAN, B&TB)

As for Kubert's art in the last issue. I dunno, I kinda find it a little too cartoony at times. Some panels/pages look spectacular and others looked kinda rushed to me. Still it doesn't detract from the book. I'm also like you where I don't really notice or complain about the art. I think 80% of art in comics are adequate at the very least but it seems we only hear about the really great stuff or the really putrid stuff.

I'm very interested in seeing how this story concludes and unlike you I loved the Donner movies so I find his involvement very interesting. I just wonder HOW involved he's been.

I would argue that environmentally-based architecture is perfectly suited for a scientifically-minded civilization. A fusion of geology and geometry - it's a science council's fantasia!

For people supposedly so divorced from nature and the environment, their design sense seems to be rooted firmly in natural phenomena as opposed to abstract geometrics.

Speaking as an engineering major, I'm not surprised. Scientists and engineers have been going back to nature for design concepts as of late. The idea is that since natural 'design' has worked for billions of years there is no reason to invent something new which will only become obsolete in a matter of years.

So Krypton's advancement may not be divorcing from nature, but an improvement on it.

Actually, Tim, I agree with you about the Byrne version of Krypton.

"Colored Kryptonite" sounds ridiculously racist, like it should have its own water fountain, or something.