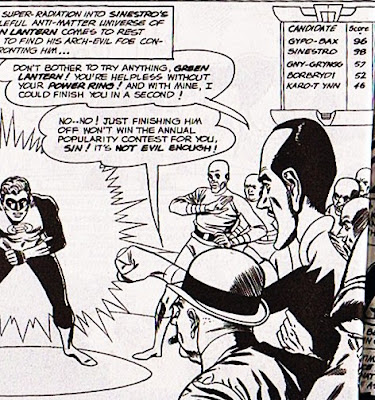 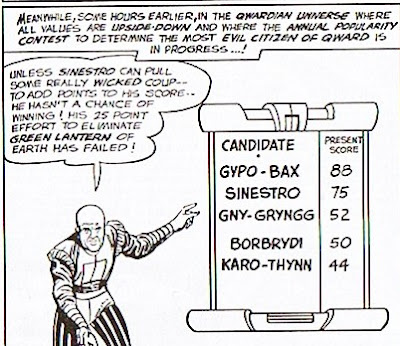 Come on, Geoff Johns. How can you pass up this opportunity?
Posted by Scipio at 6:59 AM

Hal Jordan, "a man who only wears loafers and boots...because knots are too confusing."

Thank you Scipio, this may be the most perfect description of Hal that I have ever seen. And I LOVE Hal. It's just that he does have this idiotic side to him...!

Anyway, Gypo-Bax does sound like an intriguing villain, and if anybody can put him to good use, it has to be Geoff Johns.

Wait, it says in that captain that all values are upside-down, so does that mean Sinestro's at the bottom of the heap and is only superior to whomever Gypo-Bax is?

Why isn't there a Gypo-Bax Corps?

Gypo-Bax is really the Qwardian name for Superman. He's more evil because of all those tricks he plays on Lois and Jimmy to Teach Them A Lesson.

Dude, I am so totally all over this! Just give me like, half a day.

I love the Silver Age.

I am willing to bet that Geoff Johns already has a Gypo-Bax story either in his head, or written down somewhere. He seems to catch every obscure little bit of continuity, and I'm sure he recently read all the Sinestro stories.

Heck, Gypo-Bax might be one of the mysterious "Anti-Guardians" who are running the Sinestro Corps.

I don't know what makes that guy so evil, but the new DCU is the place where we may be able to find out.

Ah the Silver Age it's silliness was truly awe inspiring. We need more lighthearted stuff like this from the comics industry today.

Oh and i'm waiting for the Gypo-Bax miniseries! Come on Geoff Johns!

No no no! The Anti-Guardians are the Anti-*Monitors*... Mark my words!

The Evil Popularity Contests of Qward... man, that takes me back. I haven't been to Qward since Hal Jordan won the Evilest Foreigner Award in 1994.

This reminds of a ploy used during the Golden Age of Hollywood: For years, when a scene in a movie showed a theater marquee, unless there was a reason for a particular film to be listed (historical reason, biopic), one studio (think it was Warners) invariably showed a fictional film called "Another Dawn" playing. Eventually, someone actually released a film by that name.

I don't know, how threatening can a villain be, whose name sounds like a brand of laundry detergent?

There you are. My depiction of what Gypo-Bax must have looked like. A giant disembodied, nazi, planet destroying, square-pupiled dude that was the size of a small moon.

Wait...what in Seven Hells is Doiby friggin' Dickles doing there next to Sinestro?

Gypo-Bax actually does show up in that first story, trying to preserve his top score by telling Sinestro that he hasn't won unless GL is really dead. The problem is that he looks like practically any other Qwardian. It's the normal-looking types you have to watch out for.