You do not have the power to resist: 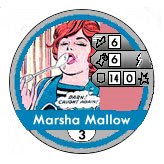 MARSHA MALLOW
I don't know about you, but I don't want Marsha Mallow in my game ... I need her.

She belongs on Metropolis-based theme teams, ideally near the Lois Lane bystander token. But she's a dangerous addition to your team if you use

Green Lanterns? Pfah! Their fabled Willpower dissipates at the sight of this batter-sucking siren. Watch your opponents blanch when Mallow crushes their schemes to double-punch you, merely by waving a chicken leg in front of their pieces. This will make her a prime target, so have a "guardian" figure protect with her Defend.

For maximum enjoyment of the Marsha Mallow pog during gameplay, put on the Food Channel in the background.
Posted by Scipio at 7:00 AM

In all of my life I don't think I've ever seen the words batter, sucking, and siren put together before.

Quite possibly only "batter-sucking jezebel" would be more impressive.

I've been printing these off and gluing them to generic pogs. Please tell me Woozy Winks is next!

How did they not mean for that Marsha Mallow panel to be suggestive?

Scip is the only person in the entire history of the internet (as seen by Google) to use the phrase "batter-sucking siren".

Wow, considering some of the more bizarre sites out ther, that's actually quite an accomplishment.