I had assumed Who Wants To Be A Superhero couldn't get any better; I was so very wrong.

Dogs -- particularly killer attack dogs -- are pretty much a sure bet for improving anything; I make sure there are plenty at every social event I attend ... keeps out the Marvel-readers and cat-bloggers

Fashion-makeovers -- particularly ones involving yard after yard of spandex -- are nearly universal in their fabulousness. Queer Eye, Pimp My Ride, Clean House, Extreme Homemakeover, and many other shows are based on the concept's wide appeal. And, face it, "Hero Gets New Costume" is one of the essential subplot devices in comic books; Kyle used to do it every issue.

Last night's WWTBEAS had both killer attack dogs and superhero fashion makeovers. I was in Elysium, folks. 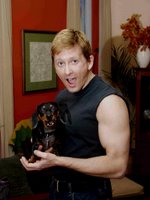 When the Killer Attack Dog sequence began, I laughed. You see, I spend LOTS of time with LOTS of dogs, more than you can imagine, sometimes 70 in a day. I knew exACTly what these people were in for. Heh. Heh heh.

When the actual competition began, well ... I don't like to say "laughing my ass off" because I don't like that kind of language on my blog. Let's just say I laughed "exuberantly".

If you've ever met me, you might already know that my laughter is not a pretty thing. It's high and shrieky and wet; very "Mark Hamill's Joker-in-hysterics".

During certain parts of the Killer Attack Dog sequence (I don't want to spoil it for you, but let's just say several contestants would be right at home in the Legion of Squeaky Toys), my laughter got to that horrible "oh no I actually cannot stop laughing now" point I'm always afraid of, because my dog stared at me with that look he gets and I thought "oh NO he's about to starting howling and when he does I'll laugh even HARDER", which of course he immediately did as soon as I thought that. 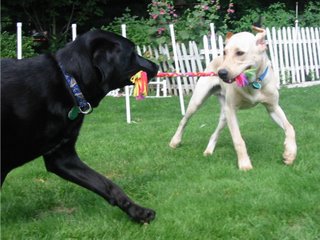 So I'm Hamill-shrieking and my dog is howling and the killer attack dogs are ignoring Fat Momma's attempts to distract them with donuts and Major Victory is praising the dogs' valiantry as they dangle from his crotch and Creature the Supertramp is being yanked apart like a ragdoll and everything's starting to go hazy because not enough oxygen is reaching my brain. God bless you, Stan Lee.

And then Monkey Woman does one of the most inspiring things I have ever seen. I'll leave it at that.

The Fashion Makeover ... that seemed like pure fun. To discover that in fact there was something more going on, something that would wind up eliminating one of the contestants ... sheer poetry.

None of the people on the show are bad people, you know. But it demonstrates in subtle ways just how often we normal people indulge in behavior that we would consider shameful if we saw our heroes doing it. Food for thought (along with Fat Momma's donuts). Put on your "What Would Superman Do?" bracelets and see whether it changes your daily life.

Yet the highlight of the episode --the final twist --was still to come! FREAKING BRILLIANT. Was it perhaps a set-up all along? Possibly; probably; heck, almost certainly. I do not know; I do not care.

The Final Twist succeeded in changing the WWTBEAS from a comic book themed show into a veritable live action comic book. This isn't "reality", this is "comic book reality", baby!


P.S. to Devon:
NOW I understand why people watch professional wrestling.
Posted by Scipio at 9:27 PM

I cannot put into words how much I love Major Victory... Nor can I properly express how much his outfit needed a cape.

Apparently next week's episode features a prison convict telling Victory he looks silly. Oh, how surprised I am that a real life bad guy would say something like that... Really. I'm totally having a heart attack right now.

I completely agree, Scipio! I hadn't seen the show when I read your first post, but after that, and my wife telling me how awesome the show was as well, I couldn't miss the next one. Fantastic! It's the only "reality" show I could ever see myself watching. It even got your DC-loving self to praise Stan the Man! Excelsior!

Rotiart - I'll admit this one snuck by me. How did I not see that one, he's even got it written on his chest! If it was in a comic I'd have seen it in a second.

Why do they keep calling her "Lumeria" when her name is "Lemuria"?

Monkey Woman is my hero.

So, frankly, is Major Victory--derring-do served with a smile.

And Enforcer totally sold me on the whole "Supervillain? Yeah, OK, I can do that!" thing.

And it must've been scripted as all get out, but like you, I didn't care, for reasons similar to yours.

And in the next episode teaser, where Enforcer reveals himself and Ty'Veculus intones, "What treachery is this?!"

The first clue for me that there was an issue with Rotiart was that he was not featured in any of the promotional material. The Sci-Fi network website had profiles, art, and little backstories on all the contestants before the series launched, but Rotiart was nowhere to be found. So that was a red flag.

This show is absolutely the best use of Stan Lee in the year 2006. The man is stretched beyond his capabilities when asked to be a writer in today's comic book scene -- but he fucntions well as a "voice of comic wisdom." Stan Lee's participation was originally one of my biggest apprehensions towards the show, but that has been resolved admirably.

About the plot twist being set-up from the start: yeah, probably. But even if it was staged and pre-arranged, it was done well. And that's really the important part. I dug it. And it made perfect sense. And it suddenly took a character with no redeeming values, and turned him into a really fascinating and well-realized addition to the show.

The winner gets a comic book and a movie. I'll tell you this much: I'm buying that book and watching that movie. Hell yeah, I am.

One last thing: Monkey Woman is off the charts. The difference in effort between Cell Phone girls 4 second surrender and MW's 10 minute epic battle could not be more starkly contrasted. Plus, I think she's very cute. So I guess now I am in love. Great.

Good show. Pro wrestling is also good, but very much an acquired taste.

"The winner gets a comic book and a movie. I'll tell you this much: I'm buying that book and watching that movie. Hell yeah, I am."

If I were God I would command Wizkids to create a special collector's set of Heroclix figures for all these guys straightaway.

All those costumes need more pouches.

I'm amazed and surprised at how good this show is, and I love how it's really based not only on the trappings of comics but on their spirit, without irony or snark - it's cool to be one of the good guys!

Anytime anyone has asked me what I thought of the show, all I've said is "I want to be Major Victory when I grow up." At this point if the winner isn't MV or Monkey Woman (who I already loved after her scrambing up the tree to change her costume last week, but whose tenacity last night impressed the heck out of me), I'll be shocked and a little saddened.

I really hope someone buys the rights to show this here in the UK. it sounds great.

Whoa Scip! Look at those guns of yours! Kudos to your trainer!

With guns like that, YOU should enter this show next season.

I think the plot was prewritten, sure, and they picked characters accordingly. Mr. Lee never thought Enforcer had a chance at winning, I think he was picked specifically to be the villain after Stan let's him go at the end of episode 2.

I can't believe how much I'm enjoying this show, by the way.

Don't get this show, so I'll have to take your guys' words on how awesome it is. It sounds pretty silly, but I may need to re-think that assessment.

Also: good GOD, man, but those are some intimidating guns. They scare me. And what's even worse, I can't stop saying "guns".

People watch pro wrestling because it is intriguing and pretty damn good. I watch wrestling for those reasons. It's that simple.

I must admit I was sad to see Cell Phone Girl go so quickly (but that admittedly could just be because she was the only one of the female heroes to go the Black Canary/Zatanna fishnets route) and I'm still hoping she and the other rejected heroes team up with The Dark Enforcer to form a team of angry super villains.

That said, like most everyone else, my heart belongs to Monkey Woman and Major Victory. No matter who wins in the end, I think we should all demand that the other also be included in the resulting comic/movie as a sidekick.

I think Major Victory will win. I'm glad that [muscular guy whose name I can't remember] is off the show though.

I think Major Victory's going to stumble a bit next week.

But I was very impressed with his performance in the Dog Trial. I thought he'd go down. But not only did he stride through with a time second only to the man-giant Tyveculus, he did so while making jokes with the dogs who were trying to eat him.

Dammit, I'm going to have to start watching this, aren't I?

"I'm glad that [muscular guy whose name I can't remember] is off the show though."

Errr -- you didn't turn off the tv with 5 minutes left in the show perchance, did you? Just wondering.

"What would Superman do?" No thanks. "What would Black Adam do?" is the question I ask myself when confronted with difficulties.

Black Adam would poke someone's eyes through their skull.

I finally watched my recording of the second episode today, and WOW that was a brilliant twist at the end. It's really got me looking forward to the rest of the series.

One of the things I like the most about the show is that the contestants are being judged on how HEROIC they're acting, unlike 99% of other reality shows, where contestants are encouraged to betray confidences and sell their competitors down the river. It's refreshing to see a show in the reality genre where folks are expected to act honorably.

I was sorry to see Cell Phone Woman go. She was cutie. But dear God did I love seeing Tyvecius CHARGE INTO THE DOGS like a linebacker. And Major Victory is just awesome.

Major Victory reminds me too much of Greg Kinnear's Captain Amazing. And he runs like a girl.

But any woman who climbs a tree to change clothes gets my vote. Go, Monkey Woman!

Loving the show, and sort of sad that the blond guy doesn't have a bigger following. But for anyone who thinks Major Victory is cute, google him. GREAT pics of him on the web. Almost makes me want to get stuck in a tree...