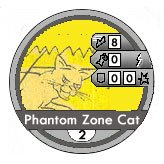 Now that the Krypto figure is a familiar site at many a Heroclix game, it's only natural that he face the ultimate evil...

You can use them as is, but there's really no point in using them without employing the Special Phantom Zone Cats Rules: 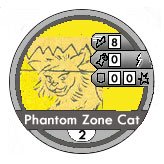 them so as to improve the effects of their attacks. Use Krypto to chase them away, Superman Blue or Red to disrupt their phantasmic forms, or super-friends like Zatanna and Black Canary to "Incapacitate" them back to the Zone.

For full enjoyment of the Phantom Zone Cats in gameplay, have Theremin music playing in the background and whisper in Spanish every time they do something in the game.
Posted by Scipio at 6:30 AM

Please tell me you've got plans for a Teekl pog.