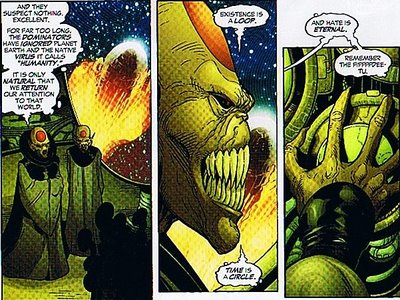 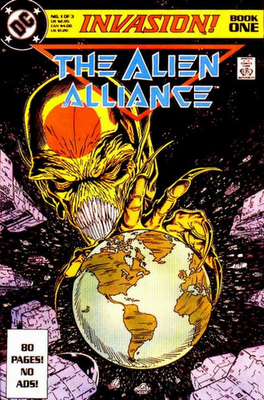 but exactly what I can't yet imagine.
Posted by Scipio at 2:03 PM

So the Dominators are pissed off that Earth pumps out superhumans, right?

And who in 52 has taken it upon himself to radically increase the number of superhumans on Earth, specifically using the metagene?

Good catch on the 52 remark in Legion #17 - that completely passed me by.

And I 100% agree on INVASION! - like I said here - it's probably the best and most cohesive cross-over ever - but you missed one other important offshoot - Blasters! Snapper Carr's finest hour, I tell you!! ;-)

Don't forget that Invasion also killed off all the crappy Doom Patrol characters and paved the way for Morrison to take over the series write nothing but pure awesomeness...

"but you missed one other important offshoot - Blasters!"

That omission was intentional, LOL!

Oh My God! The Dominators are helping Lex. That's how he unlocked the metagene.

I'll bet that before the series is out Clark Kent takes the metagene.

"That omission was intentional, LOL! "

You know, I was familiar with the Dominators, but now that I've read your entry, I can't believe I didn't realize how KICK ASS they were!

Bah. I pointed out "remember the 52" back in May over at my Legion blog, the Omnicom.

Of course, that was before the 52 series started, so I can't be faulted for not knowing what it referred to back then.

Also recall Red Tornado's last words before getting blasted, as seen in Week 5: "It's coming! 52! 52!" (Apparently pimping the series for DC).

My guess is that "52" will turn out to be something alien that "coincidentally" sounds like the number 52 when spoken, but has nothing to do with the number 52. That would explain Red Tornado's "52!" and the Dominators "fifdeetu" (when everything else was in English, or at least translated thusly).

Nice catch on the "earthers developing super-powers" though.

My post was intended not as a unique observation, Michael, but as an explanation for those who do not read Legion (and, therefore, presumably, blogs about the Legion).

Sorry, I didn't mean to come off sounding snotty. More like a "Look, a clue! I don't know the context so it doesn't mean anything, but it's a clue nonetheless." I didn't put it together with the metagene thing, I was still waiting for the alien "Fifdeetu" to show up.

But what did you mean when you said that there are people who don't read the Legion? I don't comprehend that statement. How can anyone not read that book? It's even got a better version of Supergirl than in her own book!

"Explained the relationship of Earth to all the United Planets in the 30th Century and why people from different planets all have wacky powers but look just like humans."

What was the explanation for this? I know I read it, years ago, but can't for the life of me remember...

the Post-Crisis Mon-El, aka Valor rescued a HUGE number of Dominator prinsoners who'd had their metagnes activated in specific ways. Rather than return to Earth, he helped them establish colonies around Earth as a First Line Of Defense against future invasions.

Verification word: "Vroosldx", which could have been one of those colony worlds...

One of the last present-day appearances of the Dominators that I remember, was the Timber Wolf mini-series. I really liked it: alien villains, time-lost hero, guest-starring the Creeper; but it was like what, three reboots ago? Pretty sure that's a 'continuity orphan,' probably like the other Legionaires' solo series. Still, the Doms are so evil, I'm surprised it took this long for someone to use them again.

IIRC the Dominators used the Invasion to experiment on humans to do just that.

OT: I think the most sure-fire way to make a gazillion dollars is to get the exclusive license to sell toothpase on the Dominator homeworld.

Silly Al. Toothpastre can't be transported on galactic cruiseliners because of terrorist concerns...

...that the toothpaste itself might actually be disguised Proty spies.

Reading an older post I just realized that you will find comments to long forgotten threads, so I decided to do now what I was planning on doing on some current issue that stroke my fancy.

I discovered your blog some two weeks ago, and I've spent the better part of the hollidays reading back entries.

This blog never fails to entertain me, educate me, make think, make me laugh ( to tears ), inspire me to do everything from picking certain books, up to donate comics, passign through brushing up my lit theory.

I chose to write today and here, cause I hold "Invasion!" in the same high steem as you do and for pretty much the same reasons. Also, I'm a Giffen sucker, and this is his crown achievement ( remember, around the time he engineered this, he was on or launching JLI, JLE, L.E.G.I.O.N, Legion and god knows what else.

But the main reason is to thank you: as a comics reader, DC follower, gay man, with a sense of humor who also enjoys a little higher brow writting style... you are a godsend, and probably very soon, an inspiration too.

"the main reason is to thank you"
Thank YOU, Gus; it's my pleasure.