They are the two DC characters who form the framework of their kind. Each in their own ways define their ages; neutrality toward them is impossible. And I have heard tales of families torn asunder and fistfights at comic conventions caused by arguments over them.

While their impact on our own lives might be less dramatic, none of us can remain untouched by ...

Zook and Itty.
No one has ever really known what to do with the Martian Manhunter, a sci-fi character with a pulp detective life in a superhero world. When faced with such an insoluble problem, DC did the only sensible Silver Age thing: gave him an insufferably cute space simian sidekick.

That always works so well. 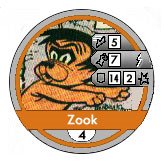 Zook was able to radiate intense heat or cold at close quarters, and had some defensive shapeshifting abilities. Thus, the Zook pog can do 2 clicks of Damage (able to harm a Tough character but not an Invulnerable one). Zook also spoke a grating baby-pidgin, something like what you'd expect if Superbaby had been found not by the Kents but by a Korean "good time girl" at a U.S. Army base.

1. Zook has Shape Change.
2. The Martian Manhunter has "Defend" with regard to Zook.

In 1975, power rings weren't the little chatterboxes they are today. Ceiling tiles and yellow lamps detected; evasive action recommended. So Hal Jordan used to fly the vast emptiness of outer space accompanied by the fascinating conversation of his favorite person: himself.

While Hal could enjoy that forever, there's only so much readers can be expected to endure. So DC gave Hal a little space pet to sit on his shoulder and listen uncomprehendingly to Hal's self-admiring ramblings; pets are good at that, trust me. He named it "Itty"; what do you expect from someone who monikered his mechanic "Pieface"?

But as is the law in comic books, all things innocent must be spoiled. Later Itty grew into more threatening adolescent and adult forms of his species, at one point sucking calcium out of Green Arrow; don't think about it. This plot was so wonderful that Gerry Conway stole it a few years later to use it in a JLA Detroit arc; amazing, huh?

You'll know the End Is Near when Wizkids puts out an Itty REV for each stage of his development.

Meanwhile, enjoy our
ITTY THE LASMA 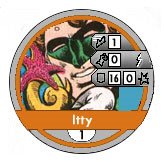 Itty does nothing, can't talk, has no special powers, and can barely move. Being small, however, he's hard to hit.

1. Heroes cannot attack Itty, because he's cute.
2. Itty can "ride" beside a Hal Jordan figure.
3. Hal has "Defend" with regard to Itty.

um... Ostrader tried to reintroduce Zook during his Martian Manhunter series. Zook is J'onn's semi-intelligent, shapeshifting costume. What? You didn't think J'onn was naked all the time and just changing his skin to look like clothing?

Yeah, it was stupid.

Zook gets some good panel time in Bizarro Comics, though.

Woah. This I knew not.

I wondered where the film version of My Favorite Martian got the idea...