Most of the pogs we've made or considered making are character-specific; that is, they make sense only as part of a very particular team. I mean, you wouldn't expect to find Dale Gunn hanging out with a team of Amazons, would you? Heh.

But today's offering will work on many villainous teams; why, it's practically the "soy" of evil mastermind teams! I refer, of course, to: 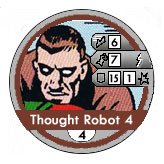 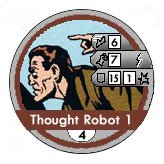 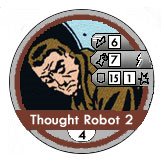 The blank eyes. The slack jaws. The hawk noses. The severe cheekbones. The dull browness of their matching suits. 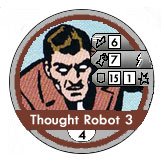 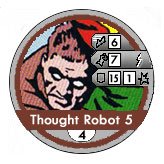 Note that I made five of them; you really just don't have one or two Thought Robots. You need a minimum of three ... otherwise, it's hard to get them insurance coverage.

The "Willpower" comes from their "Master", of course. When he or she is out of play, the Thought Robots can still attack, but they tend to slack off. Good Thought Robots are hard to find.

To enjoy Thought Robots to the fullest, play the whining drone of Complaint Rock in the background.
Posted by Scipio at 9:37 PM

Great, now I have to create a macro for my Mastermind on City of Villians that has him order, "Thought Robots! Seize him!" as his henchmen are ordered to attack.

I'm gonna have to print those suckers off.

Just curious, did that Starman villain have a name besides "hooded figure?"

They'll need to have their Master labelled on the pog itself, somehow. Otherwise players will just have to remember, which is a recipe for disaster.

I think Thought Robots should be extra susceptible to Persuasion or Mind Control or whatever.

Thanks so much for your article, quite helpful material.
Momma's Beef Stew

The answer to Prob is not in the PAC (Powers and Abilities Card) it is in the Rule Book. The reason why you can Charge and Prob is because the Charge ends right before the attack (Move, Then) while with HSS it does not end with the attack (Move-Attack-Move) (Remember, even if you HSS next to the target and stay next to the target you were considered to move 0 squares away from the target but it is still a move). You cannot interrupt your action hence you cannot Prob during HSS or with an ability like this.﻿