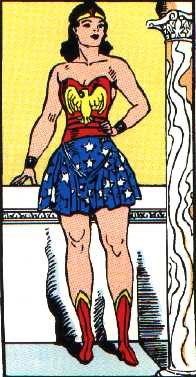 Okay, maybe everyone knows about Pendant Productions already, but I just discovered them yesterday. They do audio drama (what someone of my years would call "radio shows") starring various characters, including the Wonder Woman.

Woman Woman radio shows; how fabulous is that? Now, it's radio drama, not Shakespeare, but it's wonderful old-fashioned fun by people who obviously care a lot about the medium and the characters.

There's Superman and Batman, too, but those have to compete with the professional versions of those heroes in cartoon and the movies. On the Wonder Woman shows, you get to hear Ferdinand the Cook, Cassie, the amusingly bitchy Ares, and the hiLARious comedy duo of Circe and Dr. Psycho.

Here's a shout out, by the way, to Pete Milan who plays Dr. Psycho; Pete, you rock -- Mr. Waterbury would be proud. I'll never eat Pop-Tarts again without thinking of you.

Check it out! You've got to love something where Diana eats cheesecake and says things like:

"You could put out a cookbook; it would be great for the public image of minotaurs."


And if you want to compare this modern amateur radio drama to original professional radio drama, then do!
Posted by Scipio at 9:31 AM

This may be the coolest thing I've seen in comicdom in years. WOO!

Hell, it earns an extra "WOO!"

I had a big "radio drama" phase about two years ago. It's a whole lot of fun. Making their own? Superhero-based? HELL TO THE YEAH!

THANK YOU, SCIPIO! This has made my day.

Two "woos" in sequence, Harvey? I believe you've been possessed by Etta Candy!

"You are so smoldering when you're angry!"

Now I will forever have that voice as Ares in my head when I read him in a book.

In fact the link at the end of Scipio's post is in my favourites.

I'll listen to this show when I get a chance later today.

God, I love old time radio! Remember the original Blue Beetle? The radio show began in 1940; Dan Garrett was a rookie policeman who fought crime with the aid of a little old mad scientist who ran a drugstore during the day. The scientist created outlandish futuristic weapons for the Beetle, including an invisibility ring, a disintegrator ray, and a wireless telephone. What wacky ideas!

Two "woos" in sequence, Harvey? I believe you've been possessed by Etta Candy!

Glad you like the shows, Scip! Stay tuned ; there's some cool stuff coming up for all three shows.

Any plans for a Vibe series? I'm sure I could manage the accent...

Have you heard the BBC radio dramas made by Dirk Maggs in the 90s?

I rate them highly, particularly the first Superman one and the Spidey one due to those being drawn on classic material.

I just wanted to thank you for this nice mention and write-up. I'm really glad you're enjoying our shows, and above all, thank you for listening! :)

Thanks for the great review! I love being amusingly bitchy! Hope you enjoy what's to come! And not to toot my own horn, but if you're an Ares fan, I made my first ARES appearance in our Superman audio drama too, issue 12!

My pleasure, Pendant folks! Hope it brings you some hits.

Thanks for sharing the fun with the public!

Eee, this is so exciting! We're listed on iTunes as well. I'm Susan, the writer and producer of the Wonder Woman audio show. My husband's the big boss man that dragged me into this mess. :D

So please, stay tuned! So much more is yet to come. And I am totally in love with Ares myself, and yes, Pete is an awesome, awesome Dr. Psycho. Oh, who am I kidding, I love my whole cast and I had such a great time picking the actors. All of them! So thanks so much for the shout out, and keep on listening.