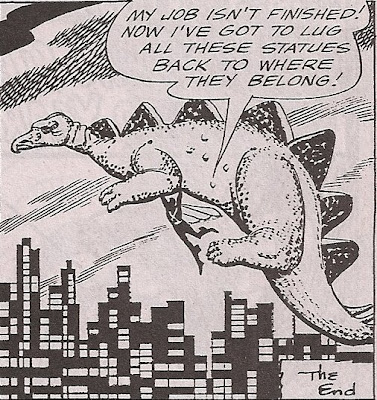 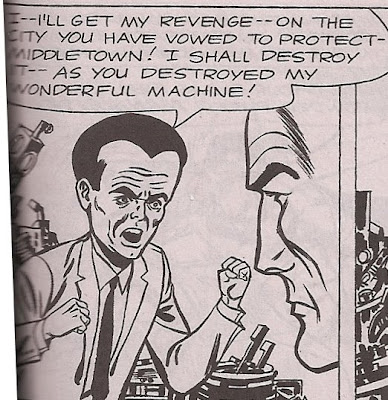 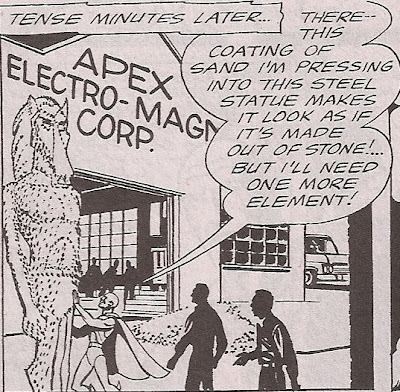 Uh, wow...I haven't run across the term hapax legomenon since I taught AP Latin 6 years ago.

And should you really malign the Human Flame? He did take out the Martian Manhunter and even got his own limited series outta the deal.

I'm up to the section of the book where he is Marcos Xavier fighting Vulture, who looks like Don Rickles with opaque pantyhose over his head. That crazy Head of Diabolu kept popping up along the coastline, Scipio, so I think Middleton is just a nearby city to Apex, like Hialeah to Miami. But, man, aren't there a HUGE amount of run-down shacks in this volume?

Boy oh boy. It seems that the JLA weren't the only ones who had to deal with "Fofeosity" back in the Silver Age...

Hooey, I say, hooey! Now look he'ah-- in the very story you took a panel from, Detective Comics #322, Middletown is referenced four times. In the first panel after the splash, no less a reliable source than the Omniscient Narrator says, "In Captain Harding's Office at Middletown Police Headquarters."

In the second panel of page 3, the caption reads, "That same day, a copter hovers high above Middletown Bank, then..."

In the panel you yourself posted, the esteemed Professor Arnold Hugo, most assuredly a step up from one-off foe the Human Flame, and being of sound mind (as certified by his repeated prison sentences,) made clear that Middletown was the city J'onn J'onzz had "vowed to protect."

Finally, in the fourth panel on page 10, a caption reads "In Middletown, soon after, panic strikes suddenly, as..."

For further evidence, see my detailed synopsis of Detective Comics #322 (12/1963) and Justice League of America #144 (7/1977.) In the case of the latter, the story not only takes place in 1959 Middletown, but also retroactively ties Detective Comics #264 (2/1959) to Middletown. I also elaborate further on this matter in the article Do You Know The Way To Middletown? which features star testimony from Silver Age fan columnist Commander Benson.

I say, Middletown is not Apex City! You can't go back to Apex City! Why did Apex City get the works? That's nobody's business but Jack Schiff's!

Considering the Kirby run on Jimmy Olsen, it's entirely possible that the Vulture IS Don Rickles with opaque pantyhose over his head.

It is entirely probable that Middletown is simply a suburb of Apex City. Here in Connecticut we have all KINDS of little towns within towns. Burrville for example is actually a part of Torrington. There's Granby, North Granby, West Granby and East Granby, except that North Granby and West Granby are a part of Granby, but not East Granby which is a separate town.

Now...what was the question again?

Wow, the Children's Museum of Indianapolis really could have used Martian Manhunter to lug around that life-sized statue of the brachiosaur last week!

All kinds of super-villains have robotic or mechanical servitors. But Arnold Hugo has an army of INVISIBLE robots! For that alone, he makes it into my Silver Age Hall of Fame.

Ah, that explains something that was driving me crazy. I remembered for some reason that there was an issue of Detective where Batman and the Manhunter both battled this guy Hugo, but I guess it was just separate issues.

Arnold Hugo has an army of INVISIBLE robots! For that alone, he makes it into my Silver Age Hall of Fame.

Silver Age, Dale. Remember I said Silver Age. And Darrk was on Earth-2. Arnold Hugo had the first invisible robots on Earth-1!

Oh yes, that's right. On Earth-1, science didn't work in broad strokes like that until the Fifties.