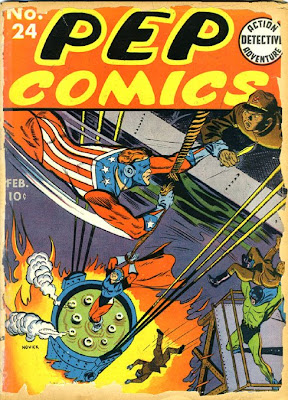 The cover to Pep 24 shows the same dramatic perspective and dimensionality that were used early on. Take that, Jack Kirby. What Pep lacks in literary depth it makes up artistically.

There's even a Japanazi (or whatever they call them) breaking out of the panel's edge and obscuring the title. Why, this cover is nearly lenticular.

The Shield is, as always, zooming in from Stage Right, testing my theory that superheroes fly by clenching... their... butts... hard enough! It certainly would explain a thing or two about the Green Lantern Corps: "Apino Pufarb, you have demonstrated great willpower against fear, plus the ability to crush a ping pong ball with your sphincter; you're in!"

The Shield seems to be stopping his foe from dropping Dusty into the Empire of the Rising Sun's sinister day-old batch of Apple Jacks. Silly Shield! Don't you realize Dusty's starched cape will catch on the edge of the bowl anyway, sparing him death by mushification?

In the midground, rounding out this heroic scene, is the ever-pleasant Hangman, who's tossing fellow humans into a raging fire where they will be incinerated alive while shouting sections of the Geneva Convention in Japanese.

Oh, yeah, in the previous issue, they introduced some little back-up feature about some buck-toothed fool of a highschooler named "Archie". Why you'd waste space on such a feature kind of mystifies me... or at least it did until this panel in Pep 24: 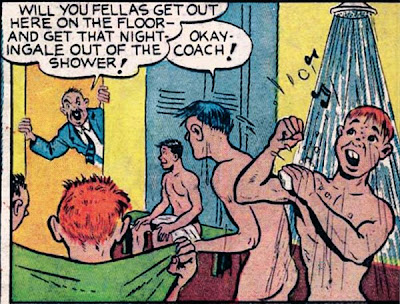 Hm. Now I have a better understanding why this Archie character gained such a grip on the imaginations of pubescent boys.
Posted by Scipio at 4:31 PM

I will say that the Shield does indeed have a particularly taut and firm pair of buttocks. You could bounce a quarter off of them! You have also discovered the secret "other" requirement for admission to the Green Lantern Corps. Let's just say that the Guardians have some rather interesting kinks, and leave it at that.

What I don't understand is why they're bothering to lower the kid into a cauldron, when they could have just kicked him off the edge into the flames, much the same way that the Hangman is doing so gleefully. Unless of course, he was the flavor in their soup.

A bare ass, in an Archie comic? Man, it really was a different time.

"Hangman, who's tossing fellow humans into a raging fire where they will be incinerated alive while shouting sections of the Geneva Convention in Japanese. "

That would be the first they'd heard of it, then. Japan wasn't a signatory of the Geneva Convention, any more than Khalid Shiek Mohammed was.