SWORD OF THE ATOM Week!

If there is a more severe on-line critic of the Sword of Atlantis folly than I, I have not encountered him or her. 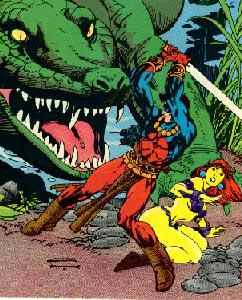 But, as I have probably mentioned before, perhaps the saddest thing about this folly is that it's not unprecedented. A similar (but better) attempt to shift a superhero into the sword and sorcery genre was made in 1983: the Sword of the Atom.

Of course, Sword of the Atom wasn't nearly as a bad as Sword of Atlantis, for several reasons. One, things happened in it. Two, it had some nice characterization going on. Three, the hero is actually quite impressive in it. Four, the Atom was in it, not a faux Atom replacing him.

I've heard differing accounts of whether Gil Kane and Jan Strnad pitched the story to DC or whether DC solicited Kane to draw the Atom and one of his conditions was the shift in genre.

In either case, Kane was well-prepared. Gil Kane had done an award-winning "sword epic": Blackmark, now credited as the first graphic novel (although the term had not yet been coined when the book was published in 1971).


Gil Kane was a versatile visual storyteller, a conscientious professional,
a respected spokesman for the industry... 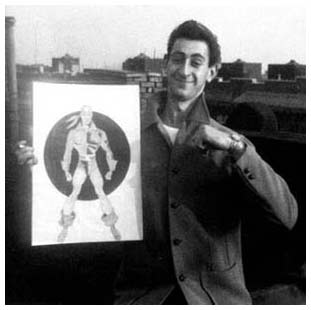 
So the Sword of the Atom mini-series has all sorts of strange and terrifying things: angry reptiles, scantily clad alien princesses, domesticated frogs, burly half-naked warrior men, and hordes of carnivorous mice.

But none so strange and terrifying as...

Yes, Jean Loring had always been kind of crazy. After all, that's one of the messages of the Silver Age: "women who put their careers ahead of marriage or man-hunting must be crazy." But it wasn't really until the Bronze Age that Jean Loring became crazy-mean.

Despite the fact that the story takes place primarily in the Amazon jungle, Jean gets more face-time in Sword of the Atom than she had seen in years. Speaking of Jean...


Proof, if proof were needed, that Jean Loring has always been evil or insane, or both: 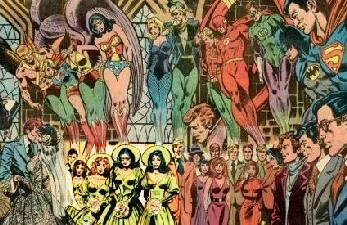 It's horrible enough that she forced her bridesmaids to wear those... those... outfits. But when you realize that's Supergirl, Hawkwoman, Wonder Woman, and Black Canary, as almost as if you're watching Hostel 3: the Makeover. Even at this poor resolution, their faces tell their stories:


Supergirl's thinking, "Cool, now I can wear this outfit again to whatever my job is next issue!" As we know, Supergirl will wear anything.

Hawkwoman's planning on using the hat for target practice.

Wonder Woman's used to looking frumpy as Diana Prince, but she looks so sad: "When will I get to march down the aisle. March, march, march!"

Sex-kitten Black Canary is utterly mortified to be dressed as a Stepford Wife: "I will never ever get married to a creepy macho putz like my mother did."

Also of note: Hal Jordan is there but couldn't be bothered to wear a tie, opting instead for a cheesy love necklace, hoping to score with one of the friends of the bride. Swinger Aquaman seems to have brought his wife Mera and his boyfriend. Oh, and when the Phantom Stranger is at your wedding it means one of two things: either you are really really cool or your marriage is not going to turn out well.
Posted by Scipio at 7:34 PM

Because that hat NEVER comes off.

It's one of the three constants of Comics.

Actually, The Hat does come off; I've seen it, a number of times.

It's the GLOVES that never come off; you just never notice it...

Gil Kane was a god. I've NEVER been disappointed when he drew the Atom or Green Lantern. I remember Sword of the Atom and its subsequent follow-ups. All very entertaining, I thought and if you didn't like the story there was always the Gil Kane art!

One thing I've never understood though is why he continued to wear the mask throughout the series... (guess it looked cooler that way!)

I hope they finish up the DC Archive editions for the Atom those issues were wonderful.

What's actually creepy is how Jean's evil is harrowing their souls out of their bodies.

I think Jean must have had some serious dirt on WW to get her into that dress.

I've often wondered how the JLA could attend Ray Palmer's wedding out of costume without blowing everyone's secret identity. I mean, several of them were quite well-known in their everyday identities. Bruce Wayne was a famous wealthy socialite; Oliver Queen was well-known as a former millionaire developer who went bankrupt amid scandal; Clark Kent was a famous journalist known for getting a lot of exclusive stories of Superman; and of course Ralph Dibny had no "secret" identity. Just how were all these people supposed to have known an Ivy Town professor?

But what dirt could Jean POSSIBLY have on Wonder Woman? All I have to say is 'SUFFERING SAPPHO!'

And how excited are we that Inquest 147 (p32) lists the Phantom Stranger as the Click Brix figure for JLA? Oh, we're very excited!

The first thing that pops into my head is those Hulk issues he did, when it was Tales to Astonish. Includes the first appearance of the Abomination.

Those are some crazy-ass stories.

"...whatever my job is next issue!" HAW! You're so right! If not for "Crisis" Kara would have eventually wound up as a tow truck driver, a caddy, a rodeo clown, and a glazier. In fact, I'm pretty sure the last shirt I bought had a little slip of paper in it that read "Inspected by Kara Zor-El." (And on the other side it said "SOMEONE PLEASE HELP ME.")

Thanks for noticing, BB.

And for making me look up "glazier".

To be fair, dressing your bridesmaids in hideous outfits is a traditional perogative of brides.

And according to the Justice League companion, Jean Loring was driven flat-out bug crazy by a villain named Norch Lor in Justice League of America 80-81. This may be the root cause of the insanity that eventually lead to her becoming Eclipso (and dressing her bridesmaids in those hideous frocks).

Hey Anonymous, I think Jean went "officially" nuts in the final issue of Atom and Hawkman, when aliens convinced her to refer to speak of herself in the third person and refer to herself as Queen Jean. That story was resolved in the JLA issues you mentioned, after Atom and Hawkman was canceled.

But yeah, Sword of the Atom was a lot of fun. The stories were jsut OK, but Gil was really doing some of the best work of his career on the books. And the whole thing started because Jean wanted a divorce, and Ray couldn't handle it.

"aliens convinced her to refer to speak of herself in the third person and refer to herself as Queen Jean. "

I simply MUST get that...

Regarding "Sword of Atlantis," I must say, I just finished the "Showcase Presents: Aquaman" trade over the weekend, and it's amazing how much different everything is. Whereas Superman or Batman (or even GL) pretty much work the same way now as they did then, Aquaman is a complete 180. I actually like "SOA," so I'm not going to bash it, but after the primer on the "classic" Aquaman, I'm jonsing for a return to the original. Hell, I absolutely dug the pre-IC stuff in "Aquaman," with Sub Diego and the water-breathers all that. I'd like to see a return to that -- which, it seems, we're at least touching on in the current "SOA" story.

Sorry about the double post, but something else I thought of regarding "SOA." Maybe Arthur Joseph is the Aquman from Earth-Eight, like Kyle Rayner and Jason Rusch being the GL and Firestorm of Earth-Eight. Perhaps during "IC" or "52," he got smooshed over to New Earth, and at the end of his story, he'll go back to Earth-Eight and we'll get Arthur Curry back. Just a thought.

"Marriage... beginning or end? Or simply another stage in the endless cycle of existence? I will punch this ice giant in the face."

It's a good idea, except for one thing:

Ronnie Raymond is the Firestorm of Earth-8; Jason is ours.

And no one will notice him standing there.

"Don't put back the 'rubber crocodiles', Mr. Pellegrino, or you will doom yourself!"

Really? I thought "IC" said it the other way around, that had the original Crisis not gone down, he'd be Earth-Eight. Well, specifics not withstanding, it might be a good out.

Luke, I was just making a statement about preferring Jason to Ronnie because, you know, Ronnie was an idiot.

Oh... sorry. I missed that entirely. Because, apparently, I'm an idiot.

I don't know much about Firestorm, other than from "Super Friends," a couple of back-ups from old issues of "The Flash," and his stint in "Power Company." I tried reading an issue of the latest series, where he ran into the Pionic Man, but I got turned off by the 2 page "Republicans are evil" rant which opened the comic book (admittedly not by Jason or Firestorm, but enough to sour me on it).

I dig his powers, though. And the puffy sleeves. Firestorm is the kind of character who needs to co-star in a series... put him and Doctor Fate in "Adventure Comics" or something and I'd buy it. (In fact, it might be only me who would buy it.)

Nice work, Scipio. And nice meeting you at Big Monkey Comics on Saturday, great place to be!
-BlackRivil

Hope I didn't oversell the Atom and Hawkman issue. I looked through my old stuff and realized it was basically an Atom version of the Star Sapphire story -- instead of aliens, it was a microscopic civilization (sort of like Sword of the Atom!) that brainwashed Jean Loring. Aliens are so Green Lantern! It was just more demented than the Sapphire story. A natural progression for a book struggling for survival.

Here's a link to the cover of the issue. It pretty much says it all:

Oh yeah, the story title? "Queen Jean, Why Must We Die?"

So much for overselling it. :-)