Okay, Sword of the Atom starts as all good Atom stories should: with Jean Loring being evil.

The Case Against Jean Loring: Exhibit A 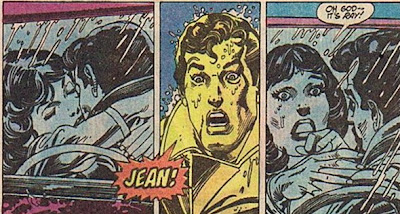 Jean is shocked when Ray discovers her sucking face with her law partner in the front seat of her car. She really shouldn't be; she was parked in the driveway outside their house.


Ray, suddenly realizes he's married to a lawyer. One who blames him for her own actions.

The Case Against Jean Loring: Exhibit B 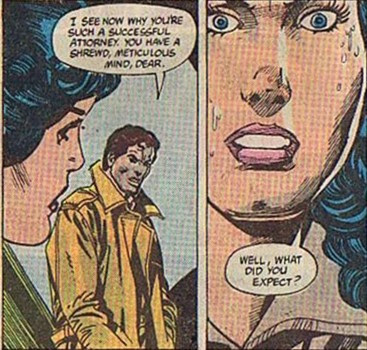 Jean, equally naive, suddenly complains about her husband being a scientist and superhero, even though that's exactly what he was when she married him.

Doesn't want to live in a comic book? Insane. Only possible diagnosis.

Oh, anyway, then Ray, to get some needed time away, charters a flight above the Amazon to search for a white dwarf star fragment, but then the pilots get worried that Ray has instead detected their secret cocaine fields, knock him out, steal his wedding ring, and push him out the plane, which then crashes due to Plot Necessity, but Ray shrinks, and lands safely in the jungle, where he's saved from a snake attack by a band of six inch extraterrestrial tribesmen whose culture devolved from an alien penal colony abandoned in the jungle eons ago, but the whole bands gets captured by the head of their tiny home city who's mad at them because they're rebels and consequently throws the rebel leader and Ray to the mice.

The Sword of the Absorbascon versus the Rats of Trade-writing

Take that, verminous modern writers of decompression!
Like the Atom, I stab at ye, who nibble away at stories with teeny tiny little bites!

Meanwhile, back in Ivytown, the authorities, having found in the plane wreckage a burned up body with Ray's wedding ring, contact Jean:

Good lord, that looks almost as painful as someone stepping on your brain with tiny little boots! It's as if a fully grown and armored Kryptonian ice cream sundae were emerging from her head.
Posted by Scipio at 9:12 PM

So was this also in the same issue as the wedding you posted below? Because if it is then I'm even more outraged about the pace of current-day comics.

I mean even if it's not, that's how an opening issue of any series should go, but still. Compare the amount of plot development in that issue to, say, New Warriors #1 (I can't think of a DC title that started recently).

"I stopped reading comic books years ago! What makes you think I want to live in one?"

Could it be that Jean Loring is aware that she a comic book character? Maybe all of her more recent craziness is just a desperate cry for help, and she's simply trying to escape to comic book limbo by cheating on her husband and murdering her best friends.

...Or maybe she's just a cruel and crazy bee-yotch. Who can know for sure? Woman are so complicated!

Jean Loring scares the hell out of me. I'm serious.

I wonder if she'll put that "shrewd, meticulous mind" to work in corrupting young, impressionable DC characters in her upcoming back-up feature.

I find it less and less surprising that Jean Loring is now a maniacal supervillain. Is there really much difference?

I always loved that scene in 52 when Ralph tries to force Jean to watch Sue dropping dead from her tiny boots. Sure it's touching when Jean shows concern for Ralph's emotional state, but recall how she first shouts "it wasn't ME!" WITHOUT any influence from Eclipso.

And wouldn't it have been teh awesome if Allen the Alien in Invicible had instead been named "Barry the Alien"?

Am I the only one who thinks the "Barry Allen returns" vibe is a huge fake out? Maybe we'll find out tomorrow, but recently DC doesn't telegraph this stuff unless it's obvious (Green Lantern) or a mistake (multiverse).

Of course if I'm right, I wouldn't be surprised if they bring him back LATER for whatever crisis Countdown is leading to, when no one expects it. Make it come full circle with the original COIE...

If he came back in Infinite Crisis, it would be full circle. Now, it's full triangle.