Next event: the Tiger Toss!


Do you remember the technique that Starman used to defeat a bear?
Well, you're not the only one who remembered... 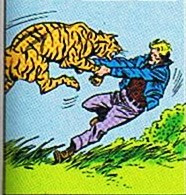 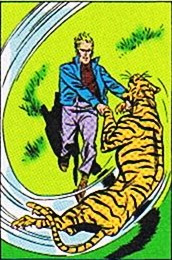 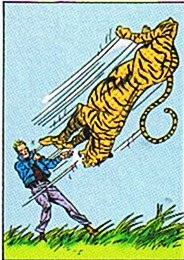 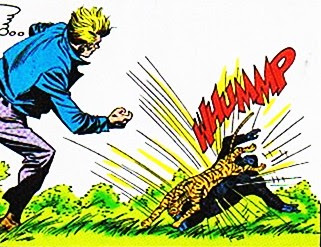 Of course, this being the Silver Age, the target is a gorilla...

I'd like to point out that tigers and gorillas don't even live on th same continent, but it IS the Silver Age, so what's the point?

Gee, Batman isn't the only superhero who enjoys beating up on animals!

Holy mackeral! Unless my memory is playing tricks on me, I think that sequence comes from Animal Man's origin story.

I think the tiger and the gorilla had escaped from a zoo (or was it an alien spaceship?).

That's it! If a gorilla comes to attack me I should get a leopard and throw it his way! How I didn't come up with that before?

They call the book Strange Adventures for a reason :) In that same issue, Buddy goes upside a sea-lion's head with some driftwood. Buddy doesn't eat animals because he's too busy kicking the crap of out them!

Find me a Silver Age hero who hasn't fought a gorilla at some point. That would REALLY be something.

I have to say, in a couple of those panels it looks like he's dancing with that tiger!

"Swing your partner
In circle shape
Toss him right
Into an ape!"

I really wish I had a tiger that I could throw at some people here at my work right now.

They were circus animals. I just love Animal Man. In a non-gay way.... :P

You mean you've never fought a gorilla? I thought everyone had by this point in their lives.

I guess they really are going extinct if everyone hasn't had the pleasure of clobberin' one in unarmed combat.