The main problem with Sword of the Atom 2? Not enough Jean Loring.

As you'll remember, in yesterday's episode, we left the Atom (Ray Palmer) and his new friend, Taren the Rebel Leader, face to face with a vicious horde of killer mice. So this issue should start with them teaming up against impossible odds and taking out the ravenous rodents one by one.

Oh, no such luck, fans of mouse carnage! The skeevy prime minister (who's actually behind a plot to make the people hate the king so he can lead a revolution and become the new king) drops a gas bomb in the dungeon that knocks out the mice. It's a little known anthropological fact that civilizations that fight with swords often develop murinosomniferic chemical agents before, say, indoor plumbing.

What's with the Mickey mickey? The Skeeve Minister says he "saving the prisoners to become gladiators in the arena". Just when you're about to ding him for lack of originality, we cut to "weeks later" when Taren and Ray (who've been separated) are dumped into the arena together and discover that...

Taren's eyes have been put out! 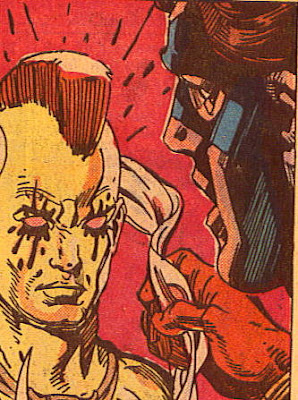 Zing! And the crowd goes wild at "the King's cruelty", storming the arena and the Royal Box. Points to the Prime Skeevister for creative use of political torture. Princess Metal-bra wisely beats feet, helping Ray and Taren escape on stolen frogs to join up with the Diminutive Rebel Band. Turns out she always had the hots for Taren.

Naturally, now that Taren's a helpless gimp, she turns her attention to Ray, whenever they're out of Taren's sight. Unfortunately, that's all the time now. Rimshot! I'll be here all week, folks.

On the side, Ray starts the Path of Bonding routine with Taren's second in command, Voss. You know the drill, it's in every movie or book about warriors, gladiators, or high school cheerleaders. Resentful Tough Guy Suspects Newcomer, until the Confrontation Where Newcomer Kicks Tough Guy's Butt, which leads to Grudging But Growing Respect, followed by Watching Each Other's Backs In Battle, culminating in Steadfast Devotion of the Tough Guy to the Newcomer as Leader. Yawn.

Meanwhile, no sooner has Ray's teeny tiny coffin been buried and the relatives and mourners left the house, when Jean puts on her nightie, slips into bed, and CALLS HER SUCKY-FACED LAW PARTNER PAUL TO COME OVER. 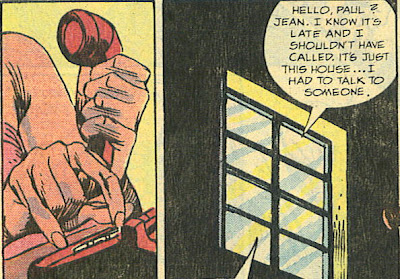 I call thee strumpet, Goody Loring. I call thee harlot.
Posted by Scipio at 11:49 AM

Make all the Alice Cooper jokes you want, but that eye-gouge revelation was totally badass to this 14-year-old.

You know what? They should have shunted Jean over to Earth 616, hooked her up with Hank Pym, and brought Janet to Earth 1 to give Ray some of that good Wasp action. Sure, she was shallow, but they both had pretty fucked up spouses. It was time to switch it up, and hang out the sign that says 'when the shoebox is a-rockin', don't come a-knockin', and let Jean and Hank spend the rest of their days inspiring made-for-tv movies on Lifetime.

I like how your comment about the Goody Loring Strumpet appears to be coming from the panel, so clearly that law partner knows Jean very well.

Anyway, was there an explanation yet why Ray doesn't just grow slighly larger to, I don't know, step on things that are attacking him?

His belt is broken in the fall.

Hah! I knew that Jean's mourning for Ray was just a front! Strumpet indeed!

I do have to say that this mini-series of the shrinking hero trapped at shrunken size and dealing with a world too large for him was handled one heckuva lot better than Marvel had done ten years earlier. Better art, too.

Not that the Puritans had to worry about what to call women who kept their own names or anything...

Actually, Marcos, there was a pointed scene in issue 1 where Ray is embarrassed by a confusion that arise because Jean has not taken his last name.

So her last name remains "Loring". And "goody" doesn't mean "Mrs.", it means "female head of household", so she'd still be Goody Loring.

Oh, she didn't take Ray's name? They should have known right then that should would become Eclipso. Rassin' frassin' wimmin libbers....

You know, I'm coming to dig Jean Loring. In, you know, the scary way that some people dig Charles Manson.

I knew that she had kept her name, but thought Goody (short for "Goodwife", isn't it?) patterned like Mrs.

I wish I could see Hank Pym(p) slap Jean Loring around.

Now, I don't advocate spousal violence, but she deserves it. And they're not married, so it'd just be "violence".