Meanwhile, back in the states...

As the dust settles on Ray's teeny tiny headstone, Jean Loring moves on with her life heartlessly with "characteristic efficiency".

While selling all Ray's old clothes on E-Bay, Jean's been shacking up with Paul Her Law Partner (the guy Ray caught her sucking face with in Issue 1, you'll recall). But suddenly, Jean, being insane, realizes that Ray isn't dead. Why? Because it would be annoying and inconvenient... 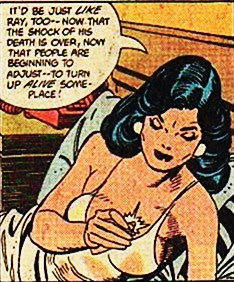 Interesting that none of this occurred to her, say, before the funeral, when the entire Justice League might have tried to find him. Or locked her away in Arkham.

You see, it's not like Ray's in trouble. Or hurt. Or held prisoner or trapped in the jungle or being attacked by reptiles. It's because he's messing with her. 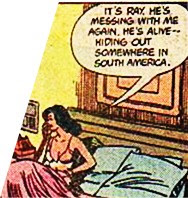 Why did this occur to her at this point? Is Paul, perhaps ... not measuring up? 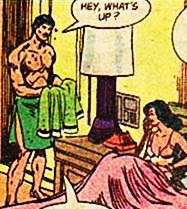 "You are, if you know what's good for you, bucko. Because I, Jean Loring, demand to be pleasured again. Now. So take one of those 'little helper pills' I've learned you take..." 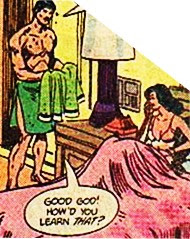 "By rifling through your overnight bag, of course.
Enough back talk; snap to it, mister, or I get out the flamethrower!"

Meanwhile, back in the jungle...

Oh, um, let's see. The Rebels prepare to attack the city. Not wanting to be a burden, Taren takes a face dive into a swarm of army ants. 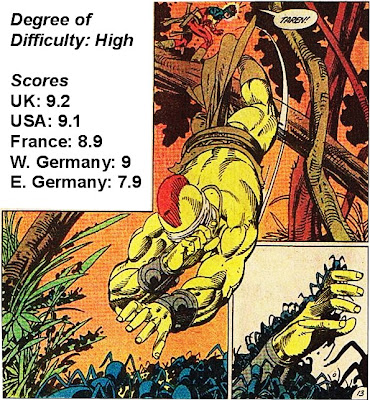 Remember, kids: stupidity = nobility.
Naturally, Princess Metal-Bra throws herself at Ray before the ants have even finished picking Taren's bones clean. I tell you, the people in Sword of the Atom don't waste a lot of time mourning or healing.


Meanwhile, back in the states...

Okay, it's not really the states. Having hopped on a plane, Jean's harshing the mellow at a hotel bar in Manaus, Brazil, while nursing a stiff drink.

So, naturally, a fox like Jean gets hit on by the local booze hound (you know, the one who's in every other episode of Bewitched)

In case you really need to know.
Mr. Pig-With-A-Wooden-Leg gets both less (action) and more (terror) than he bargained for as he discovers (A) Jean is insane (B) she thinks her husband decided not to be dead simply to make her life miserable. 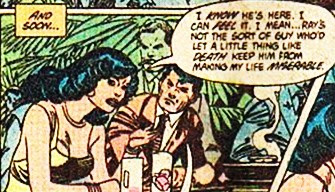 Even Death Itself backs off from Jean Loring. Do you blame it?
So Jean decides to find Ray,who could, in fact, be nestled somewhere in the molecules of the very bar she's sitting at. 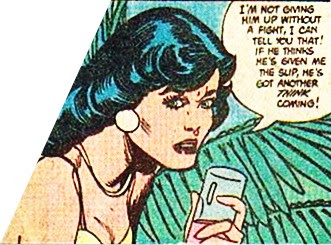 "Fortunately, I remembered to pack my flamethrower.
Just in case." 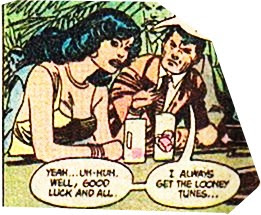 So, this guy who just called Jean Loring crazy ... to her face. Think Eclipso ever got around to paying him a visit? 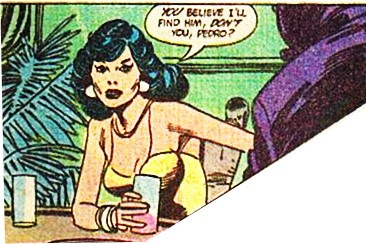 Your blog continues to be the high point of my day, Scipio.

I don't know if I'd go that far, but at least this makes it crystal clear that Meltzer wasn't the one who turned Jean into a bitchcrazy...

Puts everything in perspective, doesn't it?

The sad thing is... I'm pretty sure I've dated women who are just as self-absorbed as Jean.

Wow, I wasn't really aware of Jean Loring before "Identity Crisis," having been strictly a Superman, GL and Flash fan before a couple of years ago (insofar as DC was concerned). But Sweet Chrismas, scipio, but you have blown the lid off of the "Jean Loring was always honking nuts!" argument and knocked it into the stratosphere! This woman terrifies me!

(The Top Ten List is great, by the way. Keep up the great blogging!)

Ah, Scipio. You kill me.

Ok, I understand that Jean is completely off of her rocker, but WHY is she so convinced that Ray is pretending to be dead just to make her miserable? Either she's happy he's dead, so that she can continue to slobber over her law partner without guilt, or she's sad because he's dead.

Why does she think it is a deep dark plot? That's crazy talk! Oh...wait a minute. She really IS nuts!

With a wife like Jean I'd dissapear into the jungle too.

I never read any interviews with Meltzer before Identity Crisis, because I'd heard it was a mystery story and wanted to stay unspoiled. After reading it, I was too honked-off to care. Having read his novels, I should have known the solution would be absurd.

Did Meltzer ever talk about why he picked Jean Loring to be the killer? Was it this very comic?!?

Dude... they might as well call this thing 'Sword of Jean Loring'. She's way more interesting that Ray fighting mice.

"Ok, I understand that Jean is completely off of her rocker, but WHY is she so convinced that Ray is pretending to be dead just to make her miserable? Either she's happy he's dead, so that she can continue to slobber over her law partner without guilt, or she's sad because he's dead."

Narcissism. Pure and simple. If Ray were dead, the drama that is the Life of Jean Loring would be over. That drama cannot be over, it simply cannot; therefore, Ray must be alive.

Also, in Jean's slight defense, how many times has a superhero been "dead" and come back in her life? How many times was Ray "killed?"

Throw together a superhero's habit of fake-dying and/or resurrection with a failing marriage and a big steaming side order of Crazy Narcissist Worldview, and there ya go.

If I had read this comic before Identity Crisis, I could have figured out who the killer was by the second issue, tops. I mean really, in light of this, can anyone be surprised that Jean Loring would do anything that wasn't either crazy or just stone cold cruel? I mean, people weren't actually SURPRISED by this revelation, right?

Yes Jean, he was hiding at my place, drinking Martinis!