On My High Horse 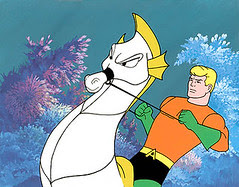 aquacel3
Originally uploaded by Scipio1.
And ANOTHER THING! [Sorry, but the whole "Tusky Controversy" has gotten me on my high horse about Aquaman...]

I want to see Aquaman riding a giant sea horse.

Veitch's run on Aquaman was doo-doo, but some great produce could be grown from such pure fertilizer. We've just discussed how the "water hand" is the perfect mechanism for giving Aquaman the power to throw hard water balls, like he did in the Filmation cartoon.

Well, the sorcerous machinations of the Atlanteans during Veitch's run provide the opportunity to give Aquaman a giant sea horse, like he had in the Filmation cartoon. Through Atlantean magic, a lot of over-sized monstrous sea-creatures were created. Couldn't a giant sea-horse remain? A monstrous one that only Aquaman could control with his aquatic telepathy?

It's a perfect set up!

I've decided that I will never be truly satisfied until Aquaman has his attacking balls back and has a barely controllable monster between his legs that everyone in the seas is terrified he might someday let loose, a fearsome animal that no one else could mount.

Don't ever mention "Aquaman" and "monster between his legs" again.

While we're at it, can I throw in my two seashells for a return of Tom Curry, Arthur's lonely lighthouse keeper father?

Tom Curry smoked a pipe, nattily worked the whole peacoat/white pants/Captain's hat vibe, and would only occasionally make his way into town to playfully toss bottles of Old Spice to hot younger men.

Otherwise, his silent vigil 'midst the sand and sea spray was interrupted only briefly, to rescue an exiled mermaid queen of Atlantis and fall in love. Sigh.

The current continuity's Aqua-dad is Arthur Curry Sr. He, too, was a lighthouse keeper. No mermaid finder he, oh no. No, he instead came across a naked, musclebound blond teenager in a tidal pool and, er, took him in.

Tom Curry: Brooding, romantic, haunted by a mysterious past. Disappeared in a puff of Hypertime, to be pointlessly replaced by.....

Have you ever seen a real seahorse? They can barely move. They flutter around weakly, driven only by the fin on their backs. They never swim in open water.

That's not a problem, if you equip the seahorse with a submersible invisible airplane. Use your common sense, man!

I've seen real men, and they neither fly nor breathe water.

But that doesn't stop me from reading comics either!