The Difference between DC and Marvel

Yes, there is a difference. Coke is a cola. Pepsi is a cola. Coke and Pespi do not taste alike; most people drink one and not the other, and the people who do drink them indiscriminately are usually waiting for what they really want, alcohol.
When I read on-line pablum about, "I just enjoy whatever, and shouldn't we all just read good stories wherever they are written, and I don't think there is a difference, and I want to read a cross-over where Iron Man dates Power Girl, and why can't we just all get along?," I want to take an uzi into a bar and slay a score of second-rate villains in a hail of bullets. But I don't. Why? Because that's a Marvel thing to do, and I'm a DC person. It says so in the blog title.
One of the examples of the Difference Between DC and Marvel is in their panthea (or pantheons, if you're allergic to Greek plurals). 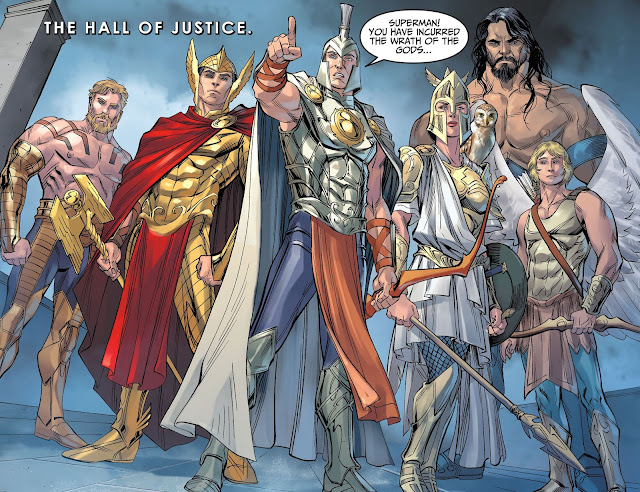 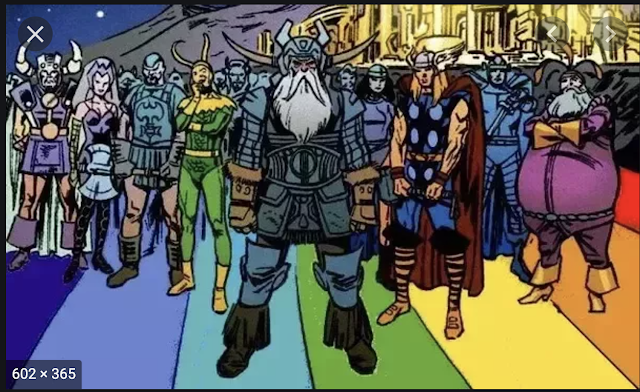 We see lots of gods and godlings in the DCU: fun, forgotten ones in Vertigo, ham-handed manques like the New Gods, decorative deities like Rao tossed about the universe like theurgic throw-pillows to spice up alien cultures. But for the most part, the "gods" in the DCU means Zeus & Co. Yes, the Greek Gods, the gods of founders of Western Civilization, the people who brought you self-government, logic, and couple other useful concepts, like: tragedy.
Now, not every DC story is a tragedy, of course. But if you set aside the "gosh, that's sad and icky" part of tragedy, its underlying tenet is that what happens to you, your fate, is the usually the result of your own character, not just random happenstance.
Batman's "fate" isn't thrust upon him by a cruel world that fails to understand him. Bruce Wayne could, at any point say, "Well, this is fruitless! Alfred, pack my bags, buy a Caribbean island (if I don't already own one), and tell Silver St. Cloud I'll meet her there for brunch!" But he doesn't, because his character is otherwise.
Superman isn't enfeebled by the mistrust of a xenophobic society, forcing him to hide as a mild-mannered drudge. "Gosh," Superman could say, "I think I'll rule the world today, then write about it in my gigantic steel diary using my fingernails." Because of his character, Superman chooses (like Cinncinnatus) to rise up above other people only when it is necessary to protect society; otherwise, he chooses to live among them as equals. Whatever "tragic fate" these and other characters suffer stems from their own virtues and flaws (which usually aren't fatal, unless you were a member of Justice League International, like Ted, Tora, those foxy French sisters, and Amazingly-Brittle Man).
But Marvel's gods are the Norse ones, who, in our culture, we know mostly through opera. It's fitting; Marvel is about personal drama, people thrust into extraordinarily roles and situations (usually against their will) by life's vicissitudes (you know, errant chromosomes, cosmic rays, radioactive spiders, and such). It's opera, not tragedy, because you are watching people suffer unjustly, to see how they stand up to it all (like on Fear Factor).
DC's message? You are responsible for protecting and improving yourself and society, so toughen up for that responsibility. 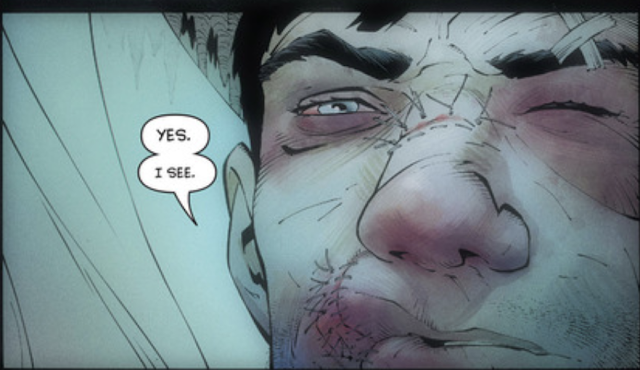 Marvel's message? You better be tough, because you're going to have to suffer many things in this world that you're not responsible for and can't improve. 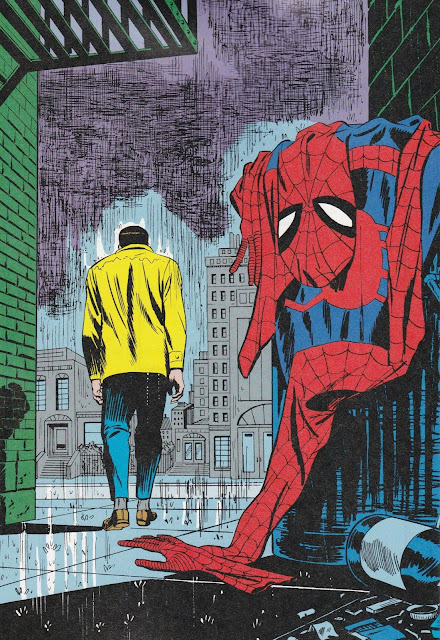 Email ThisBlogThis!Share to TwitterShare to FacebookShare to Pinterest
Labels: comic books, difference between DC and Marvel

This article should be required reading for all comics fans. If I have my way, it will.

Anonymous, your check is in the mail!

This article was very eye-opening, and although you did toss a bit of a negative light on Marvel, I could really appreciate this.

I woulkd take it a step further. Like the Greeks, DC has tragedies and comedies. The end point of the story for a given character is either death (in a tragedy), or marriage (in a comedy). In that sense, Batman and Superman are the opposing poles of the DC universe.

Batman is a tragedy. Bruce Wayne dies at the end. Sooner, or later, he will get just old enough that his reflexes will fail him and he will die. That was the point of "The Dark Knight Returns", in spite of the last page.

Superman is a comedy. Clark Kent is the Last Son of Krypton. His central problem is finding someone with whom he can reproduce. The whole system of the story is designed around that problem. Lois Lane cannot be with Superman, so he lies to her about his double identity. The dude lives in the Fortress of Solitude for God's Sake.

Every DC hero is designed in more or less the same way. Wonder Woman is a comedy. Green Lantern is a tragedy (look at Abin Sur), etc.

Marvel is more modern in a sense. There are no clear end points to most of the stories. I guess Bruce Banner probably won't end well, but I doubt that it is a tragedy per se. The characters are neurotic. That makes their problems a lot smaller. However, they can be resolved and still move forward. Spider-Man getting married was not an end point.

It's an interesting case, but haven't you been selective to make it? Take a look at that selective use of cynicism in the whole "Bruce Wayne could buy an island and retire" thing you use to establish how master of his fate Batman is. If that's up for grabs then so is the whole question of why a brilliant, handsome, billionaire decides the best way to help people is to dress up and hit people. Does he lack vision? Is he profoundly undemocratic (well, that's a given, really)? Why not be President Wayne- surely within his grasp- and effect root and branch reform of criminal justice?

Not that I want to see that in a comic, it would be like Green Team meets Prez, but I think you open Batman to the charge of neurotic nutjob when you employ that level of cynicism.

I don't really see Marvel as the pity-balm for comic readers. Any one of Marvel's characters can turn away from do-gooding whenever (and they have), but found it's not in their nature to turn away. Spider-Man has his problems, but he goes back out everyday with the hope that it will get better, or else, why would he go out? Why is he upset when Shocker tries to rob a bank for the two hundredth time? Hope. Sucks when it doesn't turn out your way, and rocks when it does.
Look at the Fantastic Four. For all the problems that come up for them, they're happy. They fight Dr. Doom and go home. They stop Blastaar from taking over the Negative Zone and go home. They rescue Johnny from the comanauts of Rigellou-IX and go home, waich movies and sleep peacefully.
The real difference I see between Marvel and DC is that there are more Marvel stories where the hero is torn down and rises over his failure, and there are more DC stories where the villain tries to tear down the hero and fails.
For me, it's more inspiring to see someone pull himself than to constantly see someone never fail (at least until the next Crisis comes around).

there's a lot of difference between DC comics and Marvel, however both companies are so cool in they own way, both have a great heroes like superman, batman from dc and from marvel part captain america and wolverine.

I read both Marvel and DC but at the end of the day I'm Marvel Zombie even though at some point I was reading more comics produced by DC. I agree with your basic premise that Marvel and DC are different. However I'm not completely convinced by your argument especially as you spend two paragraphs describing the similarities between the greek gods and DC while Marvel gets two sentences. Your arguments are hardly compelling as the same arguments you use to associate batman and supes with the greek gods can be applied to Marvel characters (as pointed out by others).

Oh and here's a simple test, read Avengers Vs JLA and you'll learn pretty quickly whether you're a DC person or a Marvel person.