Well, I got suddenly and dramatically sick yesterday. (Dramatically? Shyeah, there's a shock.) Like, fainty sick, as in a Ted Knight style "Assist me to the couch!". That's what happens when you read more than one Starman story in a row; the constitution can only take so much.

As a result, I wasn't able to finish My Diatribe Against Art that I've been thinking about. (Other bloggers rant; I have diatribes). So, instead, I'll have to release this post early...

Annuals used to be a big deal. In an era before nonstop company-wise crossovers and weekly series, annuals were the place were Big Stuff happened. Take, for example, the Justice League of America Annual of 1985. 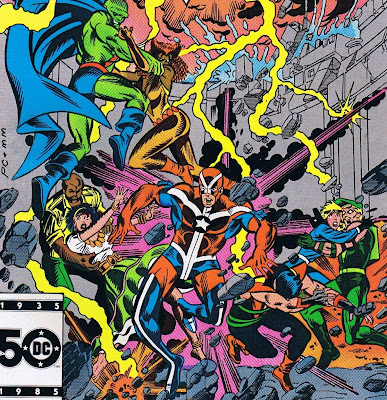 Lesson? Do not feed Steel chili.

Lots of Things Whose Shock Value is Severely Diminished by Familiarity happen. Red Tornado is destroyed; the JLA satellite is destroyed; Vixen cops a feel. 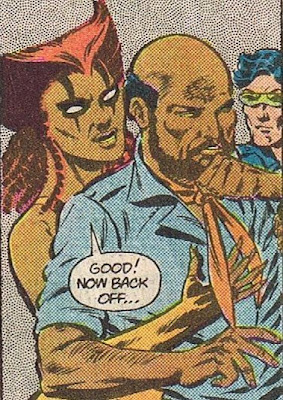 Do you think she bought the strap-on herself, or was it a gift from Dale?

Even Geo-Force gets a moment, during his double date with Black Lightning and Batman. 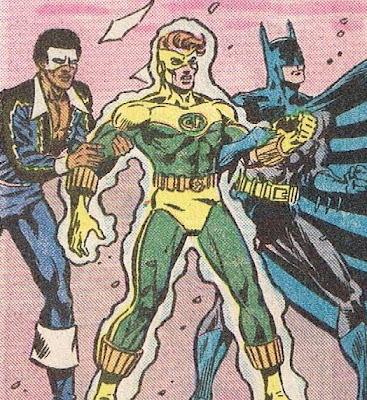 Finally, I understand why Geo-Force is on the team!
But most of the action centers around the Leaguers and Co. fighting a giant violently pink hole that's sucking in everything it can. 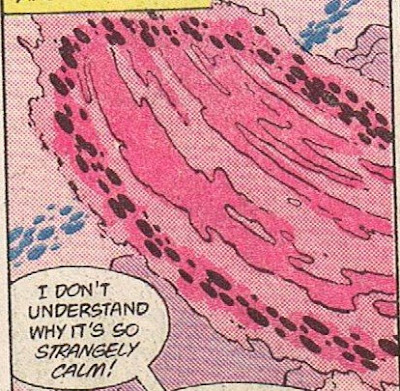 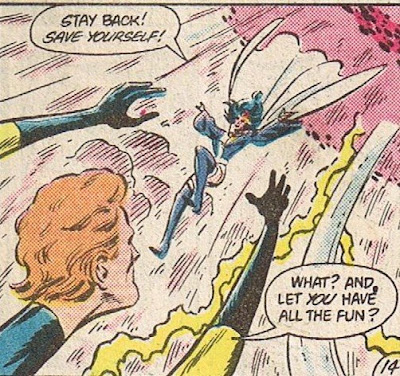 But none of that is really our purpose for revisiting this issue today. Our real interest in this issue is that contains one of the great Comic Book Haikus of all time, folks...

The space warp is still
hanging there, pulsing like an
ominous black sun.

Leave it to Dale Gunn to produce a haiku that's not just inappropriately florid, but sexually suggestive of, well, of what apparently Vixen wasn't able to resist early. 'Cuz, you know, Dale, that Space Warp is not black; obviously your mind is elsewhere.

What haiku can YOU offer to celebrate this issue, these characters, or the giant pink sucking hole?
Posted by Scipio at 11:12 AM 6 comments:

I need your help.

The good folks at HCRealms -- a well-known Heroclix forum -- are having a poll as to which character should be made in a clix figure for the first time.

Naturally, Vibe is one of the choices. Unfathomably, he is not winning. Very much not winning. Losing, in fact. As in, "last place".


Behind Toyman II (who I've never even HEARD of?)* Behind CYCLONE?! And you do not want me to start on "Gizmo". This must not stand.

Now, we all love Killer Moth. In fact, if Vibe were not on the list, KM would get my vote.

But Vibe is on the list. Vibe, who sacrificed his life to save an innocent. Vibe, who represented the Latin community as a superhero decades before Jaime Reyes. Vibe, who helped hold the Justice League together when most other heroes -- and editors -- had abandoned it as an outdated concept. Vibe, symbol of the Joy of Comics. Vibe: liver of life; lover of liver; breakdancer.

Go. Go now. Register (yes, it's free, silly) at HCRealms and represent the Absorbascon. Vote your conscience, vote for joy, vote for Vibe.

Or at least for Killer Moth or Ocean Master, cuz I'll be DANGED if Gizmo wins this...


*Please don't give me a lecture on who Toyman II is. I have internet access, too, you know.
Posted by Scipio at 7:32 PM 17 comments:

Abstraction, or, "God, my hands are beautiful!"

I love these new house ads DC is doing! You know, the ones with a creepy picture of a villain labeled with just one word, an Abstract Noun of Evil. 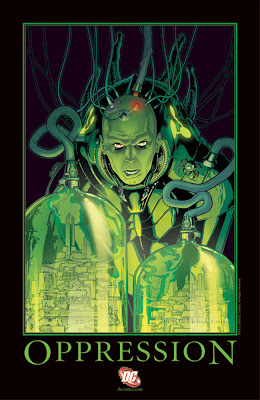 By the way, I'm in the school of thought that says that's Luthor in the suit and Brainiac is the little bug on his shoulder.
There are several smart things going on in these ads.

One, they're good, solid teasers. You know these characters are going to be part of something big coming up, and you get only the most abstract hint of what their involvement is going to be.

It's in the same vein as the "Last Supper" house ad (for Countdown? Final Crisis? Whatever!). Intriguing design with mysterious clues. People can't resist a mystery.

Two, they make good use of villains. The mettle of a hero is often measured by the quality of his villains, and the same could be said of heroic universes as well. DC villains rock. Marvel, as I've mentioned, is so interested in pitting their heroes against one another, that the development of their villains has suffered for it, and while there are some exceptions, on the whole, Marvel's villains are severely lacking in bizarritude and fabulosity. DC's villainry, however is broad, deep, and freaktacular.

Where DC generally errs is its occasional "More is better" thinking. "If one Batman villain is threatening, than 8 of them together will be mind-boggling!" (also known as "Loeb-think"). Actually, it's mind-numbing, instead. You see, it's a nice theory, but in practice all it does is water down each of the participants, and confuses quantity with quality. Once you start writing stories where Batman (or Spider-Man or whoever) takes on and defeats a whole slew of his foes at one time, each one then becomes that much less credible as an individual threat. Case in point: the Flash's Rogues. Each of them used to, on their own, give Barry Allen a run for his money. Now, you need to cobble about 14 of them together to pose a serious threat to a Shriners Convention. If you want further proof, ask yourself, where does every superhero movie franchise start to degrade? Answer: when there's more than one bad guy in the movie.

These ads make clear DC's intention to invest in individual villains, thus making them serious contenders. As we were reminded in 52, guys like T.O. Morrow, Kanjar Ro, Despero, and Dr. Destiny used to fight the entire JLA to a standstill. Mongul has always bored me silly; just a big strong man for Superman to trade blows with. But they've been re-creating him as a broader, more varied, and more interesting threat, and now I'm actually interested in him.

Three, they re-affirm the idea that DC characters stand for something. Like characters in a myth, they aren't just people, but instantiations of ideas, or ways of looking at the world. The Joker is just a creepy clown guy, but he's also a symbol of chaos. Luthor is a really smart mad scientist, but he's also Jealously and Obsession personified. Such associations evolve over time, but here DC is doing it intentionally, and that shows sophistication in their understanding of the mythic underpinnings of their work. Usually, much attention is given to what heroes stand for (Truth, Justice, and the American Way), but villains need conceptual love, too, you know.

Marvel fans might find this all a bit silly and UNsophisticated, because "real" people are just that, not personified concepts. To Marvel, abstract nouns are just a device for naming characters. And to some degree, they are right; DCs characters' level of abstraction can make them seem less grounded, less "real". But it also makes them more iconic, and more powerful devices for telling stories about the conflict of ideas. Ya picks yer poison and takes yer chances, folks.

Fourth, they're witty. In aping the style of inspirational office posters, DC's created a strong irony in these ads that hits you square in the head!

Speaking of getting hit in the head, it occurs to me that DC villains are not the only characters who could star in a series of illustrative posters on vices and other undesirables. Behold, my own contribution: 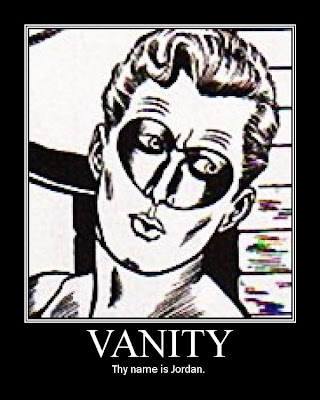 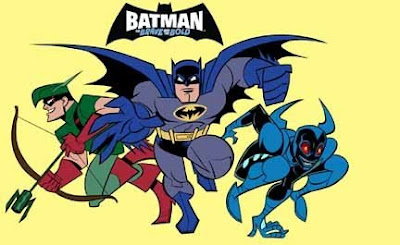 This (see photos) is the best news in quite some time.

Representations of our comic characters in other media are some of the main gyros that keep the DCU spinning. You can mock and revile the original Superfriends series all you want, but the fact remains that it hooked 14 years' worth of kids on heroes.

Both DC and Marvel realize that the hand that rocks the cradle rules the world. Yet among fandom much lamenting and breast-beating is done to the tune of "How can they be so blind as not to make comics for kids?"

Um, yeah. Well, most of you singing that tune aren't reading all the Johnny DC titles, are you? DC is not only producing comics kids can read, they're producing comics specifically for them to read. You're just going to have to get used to the idea that many comics are NOT for kids to read. That includes, I might add, most of the comics I did read when I was growing up, which were positively littered with corpses. Children, you know, are not quite the delicate little things they've often made out to be. Bloodthirsty little savages, most of them, truth be told... . 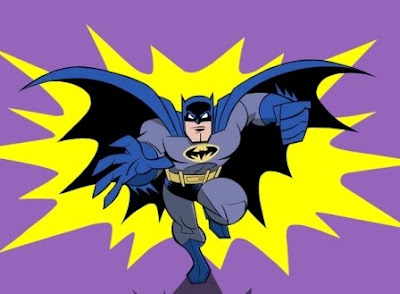 I also note that those people can get darned snobbish about the material that is created for kids. "The Batman" cartoon, for example, was a good show and it got much better with time. Yet I've rarely heard anything about it (other than people complaining about the Joker's feet). No, it wasn't BTAS; it wasn't supposed to be.

Anyway, DC and the producers of "The Batman" figured out the same thing the Smallville people figured out, indeed, the same thing that comic book editors figured out in the Golden Age: having the main hero team up with other heroes is popular and excites great interest. In fact, the last season of so of "The Batman" was essentially a new version of Justice League Unlimited (not that most people noticed, because they took one look in the first season at a character design that didn't please them, then wrote the whole thing off).

This new cartoon, Brave & the Bold, is starting off with that idea, instead of figuring it out at the end of its run. Batman teaming up in succession with other DCU heroes (including the new Blue Beetle!), drawn in a kid-friendly way; excellent.

Try not to pick on this one the way you do the old Superfriends episodes, The Batman, the new Superfriends comic book, and anything else that is no longer geared specifically toward you. Let's just be happy that comics and comics-related entertained is being produced for all ages.
Posted by Scipio at 6:32 AM 45 comments: