The Story of the Human Flame 2

(a). using his superstrength to throw a rock at Mike, breaking his leg.
(b). using his invisibility and intangibility to sneak up on Mike and tie his shoelaces together, causing him to trip and break his leg.
(c). using mind-over-matter to draw gold from the local seawater and bribe Joey to shoot Mike in the leg.
(d). summoning all the powers from the void of space to conjure a giant ice cream cone atom by atom with which to dowse the flames.
(e). something pointless that doesn't debilitate Mike but gives him the opportunity to attack the Martian Manhunter.

He uses his Martian breath to blow away the armored truck. Of course.

Do you know what an armored truck weighs? Twelve thousand pounds... empty. What force of blowing does it take to whisk away an armored vehicle? I'm thinking at least 200 mph, which is a Category 7 or 8 hurricane (on a scale that only goes to 5, by the way). That's how much the Martian Manhunter blows (and, presumably, sucks as well). Pity J'onn didn't think to, oh, knock over gun-wielding Joey or poof the Human Flame into a nearby telephone pole at 200 mph, breaking his leg (and probably every other bone in his body). But Martian hindsight-vision is always perfect, I suppose... .

I think even an armored truck would crack like an egg if blown into a hillside at 200 mph. But don't worry. Martian breath is kind of like telekinesis; J'onn just sort of "latches on" to stuff with it, and then guides it around, willy-nilly. Which is consistent with the previous story where J'onn uses Martian breath to lift burning leaves from a pile several miles away and deposit them in a tidy circle around his foe (named B'rett-- yes, really) without extinguishing them. So J'onn uses his magical telekinesis breath to gently rest the armored truck down the road aways.

Joey, not being a lunatic like Mike, immediately realizes what this means. 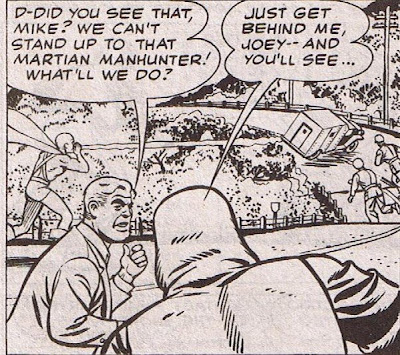 "Just get behind me, Joey, and you'll see..." I bet that's not the first time Mike's said that. 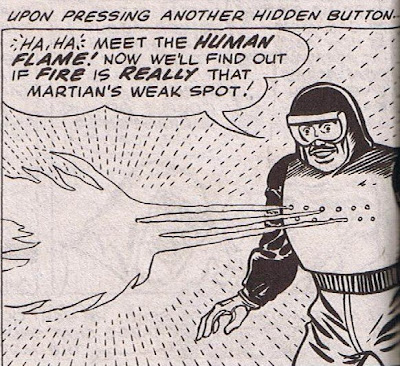 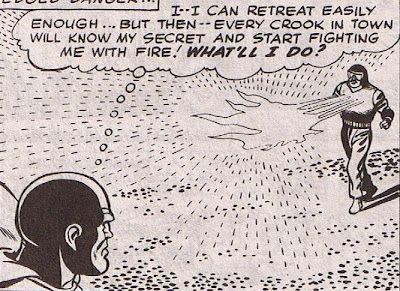 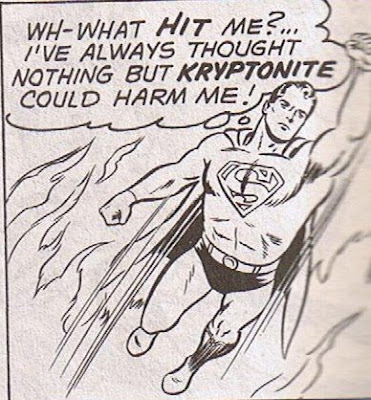 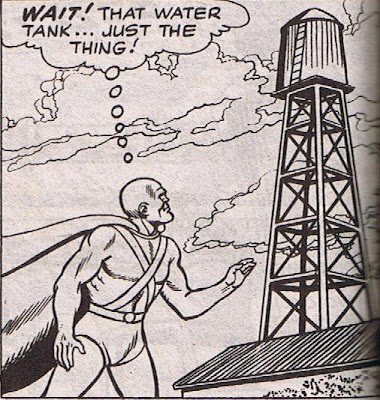 Luckily, there’s a water tower nearby (atop the World's Ugliest Bank). After all, this is , and the only thing more common in Apex City than water towers and raging fires are meteors. Besides, it’s a general rule in comic books that the likelihood of a fire is directly proportionate to ones proximity to a wooden water tower easily toppleable by the hero’s power or ability of choice (batarang, heat vision, magic lasso, tower-toppling arrow).

Okay, it goes without saying that JJ uses the water tower to put out the Human Flame (rather than having it actually land ON him, breaking his leg). But, the reason question is, how? Does he…

(a) Use his Martian vision to poke an expertly aimed hole in the water tank?

(b) Use his omnipotent Martian breath to blow or suck the thing down?

(c) Turn invisible to deceive his foe, then intangibly move underground to get away from the fire, then leap up and push the tower over with Martian strength?

(d) Stamp the ground at superspeed causing tremors that knock Mike over, breaking the crime suit and possibly Mike's leg?

(e) Use a previously unmentioned, weirdly specific, and utterly absurd power to knock the tower over?

Really, if you don’t get this one right, you're just not a Martian Manhunter fan. 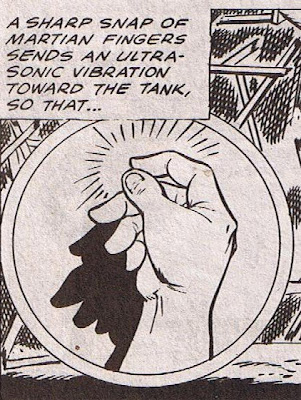 Naturally, the answer is (e). J’onn simply snaps his fingers and this – somehow – causes the water tower to collapse exactly when and where he needs it to. Mirabile visu.

Just as Martian breath acts like telekinesis, Martian finger-snapping is like a Tyroc scream. It simply ... makes things happen. Just the things that J'onn needs. Water towers to fall. Waitresses to bring Oreos. Unwanted octopus pregnancies to abort. Whatever. 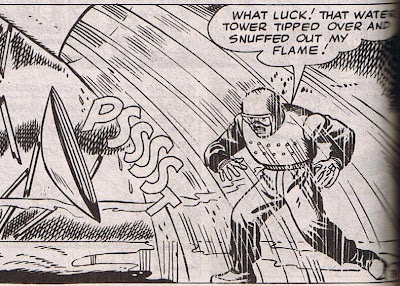 But, as we'll soon learn, the spirit of the Human Flame is not so easily extinguished...

I love that mike finds time to comment on the situation as what I can only imagine is THOUSANDS of gallons of water is falling on him.


Great series so far, Scipio. Can't wait to see how it ends, and thn what Grant Morrison does with him in a few weeks!

This is exactly why Salvation run went from quite clever to kinda clever to ABSOLUTELY STUPID.

(1) MM does not need to be visible to talk on his radio, but was.
(2) MM has mind reading and should have sensed that Catwoman was around.
(3) MM has mind-reading powers and should have sensed that Catwoman was about to reveal his dumb-ass secret.
(4) When he was about to be dog-piled, MM could have turned invisible, intangible, and flown away. He could have transformed into a bug or into Lex Luthor and swooped off with the original. What he really DIDN'T need to do was "slug it out" with the villains.

Scipio, you are really out-doing your self on this one. Great stuff! The commentary on the sound effects is especially appropriate.

I guess Grant Morrison knows unrealized potential when he sees it!

I'm starting to fall for this plucky pair. Mike and Joey are the comics' second cutest male couple: they may not have Beetle and Booster's muscle tone, but they more than make up for it in spunk. (Which I realized as soon as I typed it was a poor - if probably apt - choice of words)

I see them as DC's all-male "Laverne and Shirley" just with more overt gay subtext (Mike is Laverne). Can we please get at least a maxi-series for these two?

I don't really have anything witty or insightful to add - I'm more of a lurking sort of reader. It was a fine post, it was well written, funny and it contained the phrase "supposedly lime-flavored gelatin dessert".

It's just that I've just read the final post at Dave's LongBox, and it got me thinking - I'll miss it. Same as I'd miss any of the handful of blogs I read daily.

Folks tend to feel proprietary about the blogs they read - hence the occasional comments of the "why you no post Dave Campbell?" or the "your blog used to be great but it sucks now" variety.

Which is totally unfair, of course, considering we, the reading audience, pay zilch for the privilege of having people we don't know write beautiful things for us.

I suppose sometimes a blog writer might wonder what it's all worth. I remember Scipio had a day like that himself about a year ago. My answer would be - it brightens up other people's lives.

Hmm, sorry about the sappy rambling; ultimately, it's just a "don't do a Dave Campbell please" note to Scip.

So, in summation, er- keep up the good work.

Your kind words are appreciated more than you know.

I would add the commentary on "Pooof"! Scipio is a master of interpretive onomatopoeia!

And I echo and second Dr. Manhattan's comments. Thanks again, Scipio, for everything.

Ok, now that I have my breath back from laughing hysterically, and incidentally, frightening my dog, all I can think of, is that Mike looks as though he's shooting fire from his nipples.

I may never be able to read another Martian Manhunter comic again without getting an insane fit of the giggles.

I may never be able to read another Martian Manhunter comic again without getting an insane fit of the giggles.

You mean, you could before? You have more control than I.

This is why it's a shame that Wanted! The World's Most Dangerous Villains was canceled after a mere nine issues. I'm sure, had it continued, we'd have seen the Human Flame story in color reprint; probably in the same issue with Aquaman's battle with Electric Man, and Dr. Mid-Nite's clash with the original Dr. Light.

I believe J'onn was Garry's Marshall's original inspiration for The Fonz. Producers made him cut Fonzie's amazing telekinesis breath, but let him keep the finger snap.

Actually, the amazing part was that the two powers we most associate with J'onn now were the two he didn't have at the time:

I'm thinking about starting some sort of blog myself, but I wasn't too sure what a gay man's blog about comics could be called.

Suddenly "Pooooof!" sounds like a great idea, and I already have a logo designed right here!

What must really hurt the Human Flame's ego is that he wasn't asked to be in the first group of villains who fought the Justice League. He wasn't good enough for a team that included schmendriks like Electric Man, Professor Menace, and Clock King! Instead, Apex City was represented by the Getaway Mastermind!!

Martian Lungpower would be a great name for a band.

where do you think the "hidden button" is and what the heck is Mike pressing it with?

Well, why else would he be wearing sansabelts?