Here's the perfect (but quite belated) Klordny gift for all my fellow Legion fans:

a Heroclix map of Weisinger Plaza, the place where Legion Headquarters sits.

Now, Wizkids itself has made a Legion-oriented map but, except for its use of Interlac, it's a rather bland and generic future map. I wanted to make something more like how I think of the Legion.

First thing you'll notice as the navbeam guides your autoflyer over the Plaza is that the future is not bland; it's eye-pokingly colorful, like Mr. Nebula's Eventual Revenge. Read any old Legion story (particularly as gloriously reproduced in the Archive Volumes); the 30th/31st century is aggressively colorful, like a Easter Egg gone postal.

Second you'll notice the "Super Hero Clubhouse", complete with Legion cruiser, Time Bubble, Mission Monitor Board, Legion flag in the courtyard, and, of course, the Planetary Chance Machine. Oh, and that garden beside the Old Upside-down Rocket-ship isn't just a fancy; early Legion stories always depict the HQ against a background of trees and plants. 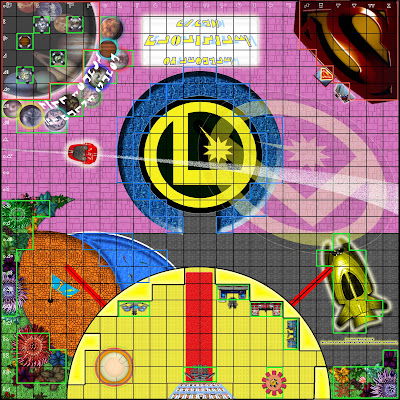 No visit to Weisinger Plaza would be complete without a tour of the Superman Museum and a stop at the Nine Worlds Ice Cream Parlor; I recommend the Martian ice cream.
Posted by Scipio at 5:58 AM

I hope that there is a bar nearby. All the losers who flunk out of the "tryouts" need SOME place to drown their sorrows.

But seriously...this is really neat.

But remember, these are teenagers; they don't drink. They drown their sorrows in ice cream floats.

where are the statues?
How can the legion function without seeing giant statues of themselves towering over the little people, blocking out the sun... as if to offend the gods themselves.

In the future sculpture must replace graffiti, as statues of the legion are evrywhere.
And half their missions are to protect the statues of local planets' heroes.

I'm sure the Martian ice cream is Cookies & Cream....

Of course, what makes this map stand out is the Planetary Chance Machine.
The PCM makes everything more professional. Simply better.

How can I get 1:1 copies of these maps so I can get them printed up?