The Story of the Human Flame 3

When last we left Mike, Joey, and J'onn, J'onn had snapped his magic Martian fingers, causing an entire water tower to topple, dowsing the flames of our plucky villain. But the Human Flame is not so easily extinguished, Grant, and Mike immediately leapt into action with his next idea.

As previously discussed, Mike (the Human Flame) was very big on the concept of the crime suit, but his plan for applying it seemed a bit spotty... 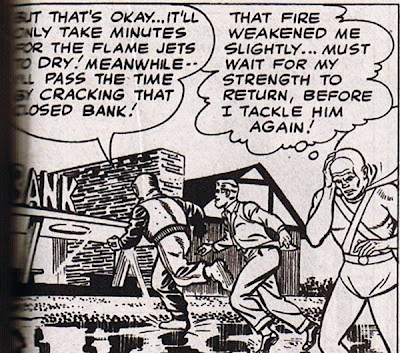 I can just picture Mike's personal page on Crimester.com: "Just your average curly-haired, barrel-chested guy with a handle bar mustache. My pastimes include sewing outfits to aid my criminal endeavors, jogging down the center of Florida highways, and robbing ugly banks." No wonder Joey fell in love.

”As long as I’m here, I’ll rob this bank,” is quite the impromptu crime plan. Mike’s the kind of guy who, in our universe, winds up shirtless face-down licking macadam on Cops. In the DCU, he winds up being the pivot point of a company-wide crossover. 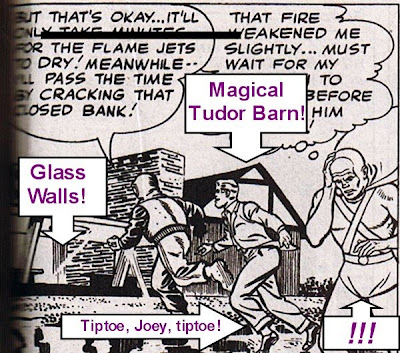 Finally, we get to the World's Ugliest Bank, as promised in the splash panel (this scene does appear in this comic!) Let's focus a bit more on this panel; there's important stuff here I don't want you to miss! Specifically...

Cantilevered populux architecture… at a bank?! Mike, don’t rob the place: TORCH IT.

So, when they reach the Bank With Glass Walls, what does Mike do? 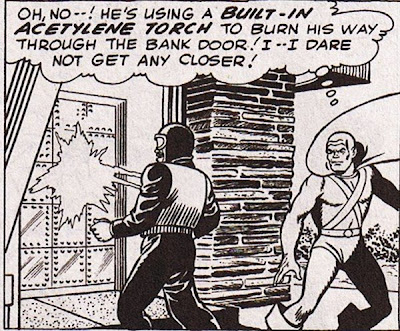 Burns through the steel door. Of course. Because what's the point of being the Human Flame if you just break through a glass window? Obviously Mike learned how to apply his power by following the Martian Manhunter's principles. Always use the least natural application of your abilities possible. Whenever possible, make up new abilities (like the ability of fire to burn through steel).

"I dare not get any closer!" J'onn thought-gasps, utterly oblivious to the fact that Mike is within arm's reach. J'onn, baby; you just blew a 12,000 lb. armored truck away on the previous page. Just give the man a Martian kick and break his leg. Heck, I could do that, and I'm not even a Martian.

By the way... you didn't notice the Magical Tudor Barn disappear, did you? Maybe it's a Martian barn and went invisible to hide from Mike. 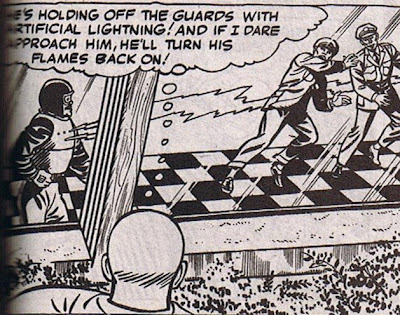 So, this bank, which apparently was once a barbershop, is, as we know, closed. Well, it must be a very profitable bank, because they can afford to pay two uniformed guards to stand around in the closed bank all day. Unarmed guards, too, I guess; otherwise, they would just, you know, shoot Mike in the leg.

At least, now we understand the narrative reason for the glass walls: it's so J'onn can see (and comment on) the action in the bank. Because it's not like J'onn can see through solid objects. Oh, wait, that's right; he can. I tell you, the writers of J'onn's stories really needed to take better notes, or at least enter him in their Contacts Database: "Jones, John. Detective, Apex City. Hometown: Mars. See through walls. Magical finger snapping. Likes Oreos. Dog's name is Jupiter. Does not smoke."

While J'onn continues to pose helplessly so that the light shadows his junk flatteringly, Mike and Joey skip off with the loot, headed for home and a private celebration. 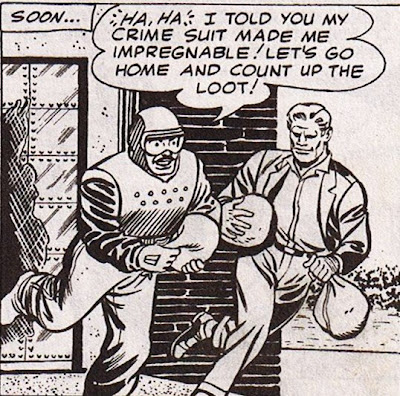 I love Joey's look:
"When we get home and get that suit off you,
we'll see just how pregnable you are, stud!" P.S. Oh, Magical Tudor Barn, come back to us!

J'onn follows them and, rather than sneaking up on them with his power of invisibility, he opts for a full frontal assault. 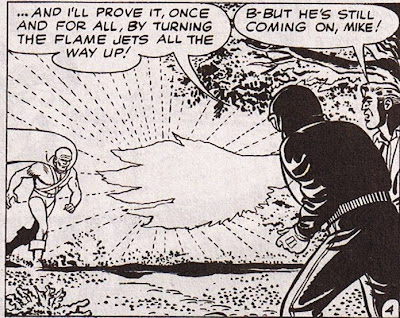 Joey's afraid of J'onn's full frontal come on because, well, he's notice the Manhunter's junk, too. Actually, J'onn's faking them out. Because the main use of superpowers in the Silver Age is to deceive people, not breaking criminals' legs.

Because Mike and Joey are idiots, they assume J'onn just sort of fades into nothingness, kind of like a Tudor Barn. This, kids, is the difference between a scientist and an inventor. 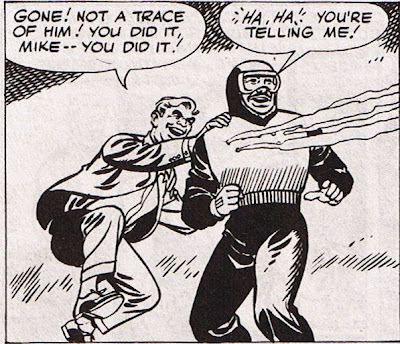 Behind every successful criminal is a love-struck gunsel. And Mike's thinking, "Tonight, he'll do ANYTHING for me...!" 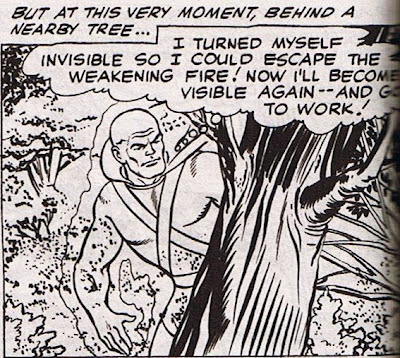 Now that the Experienced Martian Manhunter (cj083) has been knocked of his first click, his Invulnerability is still prey to the Human Flame's Exploit Weakness, so he moves to the closest Hindering Terrain, a nearby tree, and activates his Stealth, waiting to use the Ambush Feat Card on his next turn after he rests and clears his action token. Oh, sorry... for a second the whole story seemed to turn into a Heroclix maneuver.

Seriously, this is J'onn's final gambit against the Human Flame, because it's already been five pages and he's got to wrap this up soon. What does J'onn do?

(a) Pushes the tree over onto Mike, breaking his leg.
(b) Seduces Joey to betray Mike by taking the form of a giant octopus.
(c) Snaps his fingers, causing Mike's head to explode inside his helmet.
(d) Goes back to his police car, gets his service revolver, and shoots Mike in the leg.
(e) Employs his two stupidest powers in combination and in a way never seen before or since to defeat Mike and Joey.

Really, if you don't get this one, you just haven't been paying attention.

Oh, in case you're wondering why J'onn never does the obvious thing -- call the dang Fire Department -- to capture Mike, the answer should be clear: this is Apex, America's Most Flammable City. Don't bother calling the Fire Department, because they're already busy elsewhere. Everywhere, in fact.

Tune in tomorrow for the conclusion of the Story of the Human Flame PLUS an analysis of the deep deep symbolism of this story and what it says about the human condition.
Posted by Scipio at 3:56 PM

Well SOMEONE better have a broken leg by the end of this.

My only question is why has it taken so damn long for DC to bring back the Human Flame?

That's just the way he rolls.

Well done, Scipio, as always. Would you mind if I snagged one of those fine images for tomorrow's Thursday Night Thinking? I will of course link back to this post...

Of course Apex City's Fire Department is busy elsewhere. It raises the question, though; does Apex City have a Meteor Department? An emergency service specially designed to handle whumping meteors? You'd think there'd be a need there; the question is, could they get funding? On the current DC sliding timescale, this story probably took place 8-10 years ago, when Jeb Bush was governor of Florida, so probably not.

You've spent longer writing this review than they spent writing the comic.

That's not a criticism. I do appreciate it.

Or did I just spoil the big finish?

The only question in my mind is, would Batman be replaced by the Human Squirrel or the Malevolent Mr. Falcon?

Honestly, Scipio, when I read your posts I sometimes think I must never look at the pictures in my comic books! I would never have noticed the tiptoeing...

This has been one of the best series ever here at The Absorbascon.

Now, something that didn't cross my mind when the power first manifested itself, but now is all over the place: what is the relationship between J'onn's magican finger snapping and Snapper Carr's finger snapping?

This site is the #1 hit for "human flame" on google.

Finally, something for my epitaph!