How Tough is the Shield?


So tough he eats hand-grenades for breakfast. 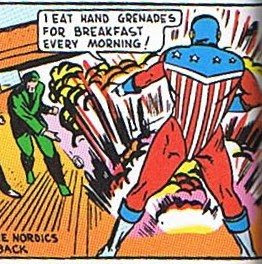 
So tough he beats sharks. 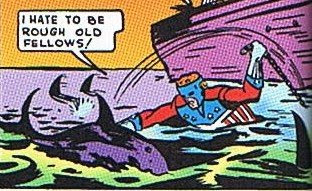 
So tough he sets himself on fire. 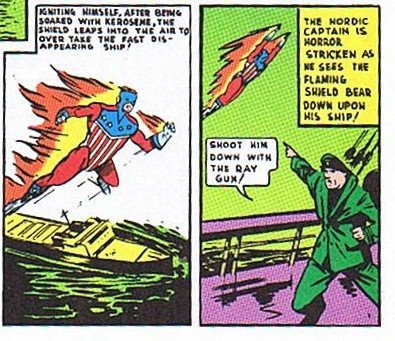 Unafraid to flame in public.


So tough that his best friend is

And little does the Shield know those sharks he's beating with chains or really poor defenseless dolphins...Aquaman would not be happy about that. Pom is probably on her way to warn him as I type!

Hilarious as usual, Scipio. Thank you. If I could be promised that the new Shield would be as intense as what you've been showing here, I think they'd have a guaranteed sale with me.

Perhaps they should have gone this route with Steel from the Detroit League? Whipping opponents with a chain and lighting himself on fire. Wow!

Word Verification: ezhag
I swear I would not make something like that up.

I'm aware that context can be the enemy of single-panel funny, but I still must ask... WHY did the Shield ignite himself after being soaked with kerosene? Does it related to the fact that ninjas can't grab you if you're on fire?

anonymous...maybe it's not the ninjas that can't grab when you're on fire or flaming...I think it's the Stokians can't. I hear they are afraid of fire, much like martians.

1. he's fireproof and could;
2. setting fire to the enemy boat would keep it from getting away... or something.

Hey, it's the Golden Age, when, must like the '90s, you just do things because they're cool.

He may eat hand grenades for breakfast, but from the looks of things? He has trouble keeping them down.

"Sorry; I had hand grenades for breakfast this morning."

But seriously, I love your portrayal of the Shield as a Golden Age "Super Dave", only without the bodily damage. Rawk on!

"your portrayal of the Shield as a Golden Age "Super Dave""

ROTFL! I didn't realize that was what I was doing, but now that you point out, I see you are exactly correct, BB!

Actually, BB, I think what we're seeing is a rear-view of his unique "explosive urine" trick...

Considering my delight in a firm male behind, I do have to say that the Shield fails in some very important areas. And why the heck is he wearing a thong anyway?

But I can't help but chortle at J. Edgar Hoover and his "pull my finger!" pose in the last scan.

"WHY did the Shield ignite himself after being soaked with kerosene? Does it related to the fact that ninjas can't grab you if you're on fire?"

Oh, no, no, no. The real reason is right there on the page: It's to help him "overtake the fast disappearing ship."

...because, as anyone who has ever paid for a custom paint job on their hot-rod can tell you,

THE FLAMES MAKE YOU GO FASTER.

"But I can't help but chortle at J. Edgar Hoover and his "pull my finger!" pose in the last scan."

Actually, I believe that's his famous "You must be this big to ride this ride" pose...

I eat hand grenades
For breakfast every morning:
I hate to be rough.