Ah, Morgan Freeman. How he's managed to parlay playing the exact same role -- Easy Reader -- into a mutlizillionaire Hollywood career and a deal with the Devil that he must appear in one out of every three films the industry produces, I have no idea. But if Michael Caine is Bruce's personal confidant then who better to play his business confidant, since Freeman and Caine have nearly identical career strategies: do any movie that's offered to you, as long as all you have to do is play yourself. 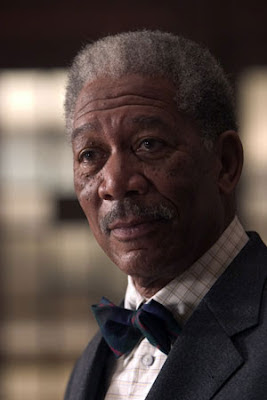 They make fair bookends within the story, too. Alfred is Mom, treating skinned knees, cleaning up the cave, fussing about Brucie's social life, and giving Sunday school homilies. Lucius, on the other hand, is clearly Dad.

"As long as I don't find out about it, it's okay."
"Hey, son; want a pocketknife?"
"Here's the keys to the Tumbler, son; knock yourself out."

But the Dark Knight being, as mentioned yesterday, not so much a movie as it is a film, Lucius has more on his plate than simply playing "Q" to Bruce's "Bond". Like the other characters, he's faced with uncomfortable moral dilemmas.

His basic mode is one of "plausible deniability"; whereas Alfred says "the Batman" in every other sentence, Lucius never speaks the word. If Alfred decides, "the less Bruce knows about what Rachel was going to do, the better", Lucius decides, "the less I know about what Bruce does, the better." Ah, but when Lucius discovers that Bruce has his own secret plans going on -- the adaptation of cell phone technology into the bat-sensor-web -- he's a bit disappointed and worried. "Wait, you're keeping this even from me? The cool dad?"

Suddenly, Lucius has found his (oddly place) lines of conscience. "Hey, it's fine by me, if you run around breaking people's limbs and tearing up the city in rumbles with one of your old pals who taught you how to knife-fight. But when you start using society's telecommunication infrastructure to locate mass-murdering psychotic clowns, well, that's a line I'm not willing to cross."

Lucius becomes Tony Stark; suddenly, he decides to find himself accountable for the applications of the technique he helps create, and wants to make sure its use is consistent with his own principles.

Lucius "bravely" lays down the law: either this thing goes, or I do. But not really. His position is actually, "Well, son, it's okay this one time, as long as you don't make a habit of it." Seems to me that what's really at stake here isn't Lucius's principles -- he's willing to sacrifice those for the Dire Situation at Hand (and there's one of those in Gotham on a weekly basis). What seems really to be at issue for Lucius is, "Am I part of your moral compass or aren't I? If I'm not, then count me out, and I won't be facing down any bullies who want to blackmail you about your secret life any more."

There do seem to be all kinds of moral conundrums going on, don't there? I guess that I can understand Lucius being miffed at being left out of Bruce's confidence.

Bruce has got to get a grip on himself and stop keeping all these secrets from people who are important to him or he's going to end up as nuts as the Joker.

Alfred is Bruce's mother and Lucius his father?

Freeman and Caine excel in this movie; I think their sprezzatura is revealed by the fact that Oldman sometimes seems to be in over his head in terms of realistically rendering comic-book dialogue, whereas the two old chaps do it wonderfully. You make a great case for what Lucius wants to be doing, Scipio; but I found Freeman so convincing in the movie that I was happy at the time to go along with the surface meaning of his taking a Strong Ethical Stand on a Timely Social Issue.

I really hope that if they do another one (and with the box office on Dark Knight I'm sure the studio is going to throw as much money at the main people involved as is needed to make another one) that Lucius and by extension the gadgets are downplayed. Batman isn't James Bond in a costume or Iron Man without the rocket shout. He's the world's greatest detective! Let's see him detect! Sure gadgets are a bit part of things like CSI but in Batman they have all too often overshadowed the other aspects of the character.

I agree. There is really something quite odd about Fox's unwillingness to use his own toy in much the same way he used it in Hong Kong. While Bruce ups its abilites, all he's asking is to track down the Joker. This particular moral quandary of the film strikes me as a little shallow.

I think the primary reason for this plotline in the movie is to insert a de rigeur ritualistic denunciation of The Evil Chimpy McHitlerburton administration, and how it's, y'know, looking at everybody's library records and sending its Gestapo around to do domestic spying on the entire country just to be mean, and stuff.

Well, if that's so it's not much of a criticism, since, in essential, Batman is justified (as exonerated by Mr. Fox) in wiretapping the general public(use the bat-web) to catch a terrorist (the Joker).

Scipio: Actually, the more I think about it, you're entirely correct. Lucius' position seems a little naive (i.e., that Batman will never face a threat requiring the use of this technology again), but as you point out, that's not *really* what he's objecting to.

I think you do the moral quandry a disservice. What it's REALLY about, if you think about it... is that Fox doesn't TRUST Bruce not to just sit around and spy on everybody. In this sense it *is* about the current issues we're having in this country. It's not that we don't think that monitoring won't prevent something awful from happening someday, but that we don't TRUST that it won't be used, eventually, to monitor political rivals or to hush Larry Craig's stallmates before things hit the fan.

As much as Fox would like to empower Bruce at taking on Gotham crime, he just doesn't think that Bruce or even he, possesses the judgment to prevent... I don't know... let's call it... a preemptive strike against someone who someday might possess a weapon of mass destruction that can be used against Gotham

The compelling thing about the cell-phone issue is that it si both disturbing and completely justified. If the government had listened to everyone's phone calls for 2 hours on September 12, 2001, retained none of the non-relevant information and actually caught Bin Laden, would anyone really complain? It would be completely justified. In a way, the quandary, as it plays out, is a fantasy of hyper-competency and incorruptibility.

The best superhero movie ever. The Dark Knight deftly accomplishes all one could hope for, and then it surpasses it, and then it continues to surprise. The movie isn't just a triumph, it is that rare pop-culture oddity: A masterpiece." it is the best movie of the year.So get this movie from here for free...The Dark Knight Download Free