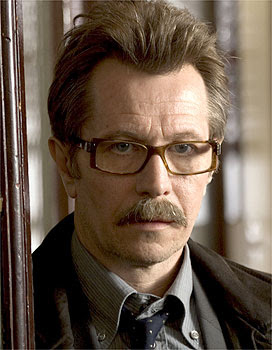 Gary Oldman is so good as Commission Gordon that you don't really notice him at all. And, yes, that's a real compliment.

You can tell Oldman is outstanding, in short, because he doesn't stand out. It's a good trick, since of all the characters in the movie, his is perhaps the moral center.

Like Harvey Dent, he's a law and order kind of guy. Like Batman, he's not afraid of unorthodox approaches to a problem. But the closest character of comparison for Captain, er, I mean, Commissioner Gordon, is Assistant District Attorney Rachel Dawes.

Both Dawes and Gordon are civilian law enforcement officials who are faced with a choice between ordinary and extraordinary methods of justices, as represented by Harvey Dent and the Batman, respectively. For Rachel, a choice must be made; you can't have your cake and eat it, too, and her romantic relationships with Harvey and Bruce highlight this dilemma.

But, for all his being a good guy, Gordon isn't an idealistic; he's a pragmatist and an opportunist. He doesn't see Harvey Dent and Batman, and what they represent, as two things between which he must choose. He sees them as two useful tools for accomplishing his mission, each with its pros and cons. To Gordon, Harvey Dent (ordinary justice) and Batman (extraordinary justice) are just two sides of the same coin.

The script makes a point of positioning Gordon as more flexible, less extremely hard-nosed than Harvey Dent. It's kind of subtle, but several times he and Gordon are in conflict about the fact all the men is Gordon's hand-picked unit don't have exactly spotless records. That's unacceptable to Harvey Dent; after all, you're either all-good or all-bad, right? Small wonder the cops call the unforgiving Dent "Two-Face" behind his back.

Gordon's a bit more practical than that. The issue is underlined later when Detective Montoya, oops, I mean, Ramirez, confesses how she was suborned by the gangsters when in desperate need for Money For Her Sick Aunt May (or some such). Is Ramirez a bad guy? No, she's essentially a good guy trying to cope with bad circumstances (like many citizens of Gotham). Gordon understands that better than Harvey does.

Gordon's real test isn't choosing between Harvey Dent and Batman (which he doesn't do). It's in deciding to fake his own death and in cooperating with the conspiracy of silence about Two-Face's misdeeds. But even in those decisions it's just about having to hurt his family and his friend Batman in the process, not any intrinsic moral principles.

James Gordon, pragmatist; he bends his principles, so he doesn't worry about breaking them. That's what makes him successful in the films and makes him the character most immune to the Joker's various machinations in the film.
Posted by Scipio at 6:29 AM

In a film filled with so many amazing actors and performances, it's very easy to forget about Mr. Oldman and that's one reason his character resonated deeper within me than any other.

As an actor Oldman has made his reputation playing freaks and oddballs, from Sid Vicious to Dracula to Drexl to Stansfield to Zorg to Dr. Smith to Mason Verger, which makes his disappearance into the skin of Gotham's sanest and most normal hero all the more extraordinary. More than any other character his Jim Gordon is the person most of us watching are able to imagine ourselves being--ultimately just as heroic as Bruce Wayne, but without any of the neurosis.

I am not one usually surprised by a movie's twists and turns, but when we were led to believe that Gordon was dead I felt bereft. For a moment I actually believed--foolishly--that he was gone and I wondered how without him the others could hope to succeed. Watching the film it becomes clear that if the world is to be saved we must not depend on supermen in capes and armor, but on those few men willing to take the same risks with nothing but their enormous will for change to protect them and it the total lack of artifice in Oldman's performance that convinces us that such men might actually exist.

I agree with most of your comments about Gordon. I wonder though how he's going to take, long term, the fact that Dent was essentially right about Gordon’s tainted cops -- that Ramirez and Other Cop were compromised essentially got Dawes killed and Dent disfigured.

How much of the blood on Two-Face’s hands can be traced to the decisions of the pragmatic Commissioner?

I don’t think I’ve ever seen a bad Gary Oldman performance, and his work in the Batman films has been some of his best work.

YES, though Heath Ledger's Joker has gotten all the attention, the character I liked best in the film was Gary Oldman's Gordon. I wasn't quite sure why that was, but I think you've hit upon it here. Thanks!

These write-ups are great, both entertaining and thought-provoking.

Gary Oldman's Gordon makes this series of Batman movies for me. As outstanding as Ledger's Joker was in TDK and as great as Eckhart was as Dent, as great as the cast in general was this time around Oldman's performance was the best. I've seen it five times, and the scene before the final confrontation with The Joker when Gordon is pointing his gun at Batman saying; "Dent is in there with them, we have to save Dent! I have to save Dent!" still sends shivers up my spine. Because that? That is James Gordon right there.

All great work, Scip... however, I think one little nitpick, which I'm sure you know, is that the cops called Harvey "Two Face" because that's what you call someone whom you trust who betrays you. A much simpler reason for the name.

I think trying to fit extra details into your theses is fine, but trying too hard is a little distracting. Your theses are strong enough without it.

I like one of the comments above, which I think you could play with a little... that Harvey was right. You could say that "all good/all bad" is a naive attitude, and it certainly is the way Harvey is portrayed, but there's something to be said for an argument of the ends doesn't justify the means. In other words, just the idea that Ramirez was a little corruptible in the past, even for honorable reasons, also means she's proven herself susceptible to corruption and shouldn't be trusted.

Notice that not only was Ramirez corruptible through her dedication to her family, but so were the cops who tried to kill Reese. And, of course, Gordon, who isn't corruptible, threw his family under the emotional bus. Along with Bruce/Rachel and the prisoner's dilemma, there's a theme of our strongest ethical and moral societal ideals being distorted or focused through our personal ethical and moral ideals. Gordon and Bruce, in that sense are both making the same choice- society first. Harvey apparently thinks he can have both.

Nicely said. Pragmatism is one of the less noticable virtues, but there is a lot to be said for quietly getting the job done. The practical characters are so often the ones who are behind the big flamboyant heroes. Just look at Henry V and the Duke of Bedford!

"the cops called Harvey "Two Face" because that's what you call someone whom you trust who betrays you."

That IS the point I was making. If you watch the scene, it's specifically said that that's what they USED to call him, before his scarring, before he was "revealed" as Batman.

My apologies, Scip. Like I said, I knew you knew, but reading the essay, I saw a different interpretation. Looks like you were saying they called him Two Face *because* he looked at things as all good or all bad, not because of the feelings of betrayal.

Oldman is what I refer to as a "problem actor". If you have a part with no idea who to cast in the role, this guy (or gal) can come in and knock the character out of the park. For my money, Oldman is the most talented actor working today, and has been for many years.

When Gordon's family is threatened by Two-Face, the way he's prepared to say anything, do anything- without a hint of pride... It's hard for me to express what was being conveyed. I'm sure the Germans have a word for it- and it's probably very long. Perhaps someone else here can better explain that scene.

Harvey Dent suffering from the dichotomous thinking of a Ditko hero -brilliant. This movie is eliciting wonderful bloggage from a few people!

"When Gordon's family is threatened by Two-Face, the way he's prepared to say anything, do anything- without a hint of pride... It's hard for me to express what was being conveyed."

Yes, that was one of the most powerful scenes, very human and really devoid of "comic book" effects. I think it pinpoints why Gordon is in some ways the center of the movie. It's because he not only is a pragmatic hero, he's the one with a true stake in this city. It's not only his job to police it, he has a family. So he plays a dual rule of symbolizing Justice in Gotham, but also symbolizing its citizens.

Bruce Wayne's attachment to the city is in many ways abstract, he loves it in place of his parents, he has no true connections to it because of the double life he leads. Rachel serves as his only link, and even that is abstract, he cannot have her. He can be Gotham's knight perhaps partly because he has so little to lose.

Gordon is caught between. Not only having to decide between ordinary and extraordinary justice, but having to implement it while at the same time suffering the effects.

Gray Knight seems to make sense. Gordon doesn't feel he can make the sharp idealistic stand of Dent. He has to work within the corrupted framework of the department, and that means having to tolerate a certain amount of the corruption while trying to keep his aim true. He knows, or suspects, that if he was as hard nosed as Dent he would soon be gone.

Yet then of course he is not willing to abandon the system in the way Batman does.

The prior posts of SallyP and "anonymopus" have hit the nail on the head. Pragmatism really is the core ethos of the movie. Fittingly, given the setting of the filming, it appears to be the pragmatism of the Chicago School: Dewey and Posner. The problem with philosophical pragmatism has always been one of context. What is the framework for your pragmatic ideals? Stated differently, what is the Kantian categorical imperative? In the "Dark Knight," the only people who are spared are those who use people as their core ideals rather than abstract ideas. Dent believes in purity and control. Wayne's beliefs are very similar. Idealists are chewed up and destroyed by the dedicated sadists of Gotham: either the Joker or the city itself. Gordon believes in protecting his family. Period. He has thought this through, I imagine. He wants Gotham to be safer to protect those that he loves. He fakes his death to take reprisals against them off of the table and also to take a shot at completely neutralizing the threat. He immeidately acquiesces to Harvey's demands because he is egoless and clearheaded in his pursuit of safety for his family. His narrow and clear-headed approach to his pragmatism is what saves him and and also makes him so damned appealing.

Now, I acknowledge that his choice to fake his death caused his family hurt but I believe that the character accepted this temporary hurt and physical safety as preferable to the possible of actual, permanent harm. It is a thorny and interesting parable. That is why it is so remarkable that a Movie based upon funny books can lead to such robust discussions.