Let's talk about the Dark Knight.

Naturally, I was moved and impressed. Almost everyone who sees it is. It is, as a friend put it, not a Batman movie, but a Batman film. When discussing the film's power, many people focus on the strength of the performances. But that shouldn't be allowed to mask the strength of the material the actors are working with. Thanks to the script, most of the major characters face a strong moral dilemma or two, and unpleasant compromises of their ideals. 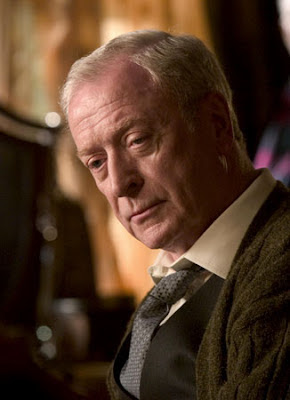 Michael Caine's horridly lower-class accent, by the way, is still like an icepick in my ear, but it seemed a little less harsh this time, as if the icepick were wrapped in velvet while being shoved in my ear.

His character is the voice of tough love -- sort of an icepick wrapped in velvet -- and forces Bruce to realize when he has to make the tough choices in his own dilemmas, and what the right thing to do is. While he succeeds in helping Bruce make his moral choices, I think Alfred's tragedy in this film is that he badly errs when making his own moral choice.

Alfred faces one of the film's quietest and most intimate dilemmas, and his decision to destroy Rachel's note rather than share it with Bruce is also one of the most questionable. Clearly, he thinks Bruce has suffered enough, and a post-mortem rejection isn't really what he needs on his plate.

But, if your life has been anything like mine, you've been hurt far more often and more deeply by people ostensibly trying to spare your feelings than by people actively trying to hurt them.

Who knows? Perhaps Rachel's note might have helped Bruce move on and lessened his burden. In any case, it shouldn't really be Alfred's decision to make; Rachel left to Alfred the decision of when to tell Bruce, not whether to tell him. And make no mistake; Alfred doesn't hide the note away, he burns it.

In keeping the note from Bruce, Alfred is still treating him as a child, not an adult. He deceives Bruce by omission, and proves himself unworthy of the trust Rachel placed in him (and that's to say nothing of the trust that Bruce has placed in him).

Which is worse? Finding out that the person you loved, but weren't realistically ever going to get with anyway (who, I might add, has been very seriously dating someone else), and who's now dead, wasn't planning on waiting for you, or..

finding out that the person who raised you and who continues to be the person you trust more than anyone in the world deceived you about that fact?

Alfred's dilemma and decision don't engender any explosions, societal issues, or life-threatening situations. Yet, I find Alfred's quiet betrayal once the bitterest moments of the film, and perhaps the deepest cut of all.

Scipio, Interesting. My otherwise wonderful wife was miserable sitting through the first part of Batman, due to the loudness and bloodshed. After Gordon died, and I knew that Dent's disfigurement was coming soon, we left the movie, and I plan to see the through in the next week or so, without my wife cringing in the next seat. I have heard from others that someone I thought had died didn't, and now I learn that someone I didn't expect to die did.

Interesting observation. It bugged me as well that Alfred burned the note. However, I also got the impression that Alfred DIDN'T burn it to spare Bruce's feelings. I thought he did it for the opposite reason -- to spur Bruce on and keep Batman going, especially considering all of Bruce's talk earlier in the film about giving up being Batman. Sure, Alfred's always been very good at very loudly chastising Bruce for the whole Batman gig. But when you get right down to it, Alfred supports Batman because he recognizes the good that Batman does and knows that Batman is needed. Anyway, that's how I see it.

Whatever Alfred's motivation, I'm sure that he made it with the best intentions. However, the path to Hell and all of that. I do wonder if this is going to come up in a later movie, and what the consequences will be?

It is clear Rachel wanted Alfred to read the note by telling him it was unsealed. If the time to give Bruce the note would never materialize then Alfred would not be wrong in never delivering. There was no clear violation on Rachel's wish.

I was a little put off too with Alfred burning the note. Alfred is supposed to be the one person Bruce Wayne trusts and loves the most and for him to burn the note, no matter what the intent, to me, is a big betrayal of trust.

Yes Alfred has always been Bruce's caretaker and confidant...always looking out for him and being the friend AND father he needs...but this really was a bad call on his part to keep a heavy burden from him. I agree with the fact that it may have been something that Bruce didn't need to know right then and there...but hide the note and wait for a better time...don't burn it.

I'm less sure than everyone else here seems to be. The note had become a different thing by the end of the movie-- it had gone from being a way to explain the blow that Bruce would have received by hearing the news of Rachel's engagement, something they could have talked about at some later date, to a deathbed declaration that Bruce was touched in the head.

Indeed, Rachel might have changed her mind before delivery and asked Alfred to destroy it, once Batman saved and cleared Harvey. She wrote it in a fit of pique after Bruce let Harvey take the fall for being Batman-- in other words, during a very temporary window.

Maybe if the note had just said that Rachel was choosing Harvey over Bruce, Alfred would have had the duty to share it someday, so as not to let Bruce live a lie. But the note was more accusatory than that, in a way that would go from hurtful (while Rachel was alive, while she and Bruce would have a chance to talk it over someday) to devastating (when it becomes Rachel's final words to Bruce and permanent judgment upon him).

Alfred's actions parallel those of the film's two heroes: Batman and Gordon. Both Batman and Gordon believe that the people of Gotham would fall to pieces if they knew the truth about Dent. Thus, they fabricate a story which turns Batman into the villain in order to keep the people from the truth. As I wrote on my own blog, this is a violation of the trust that the people put in Gordon and Batman.

Alfred's betrayal, as you point out, follows similar lines of logic. Thinking of the greater good of the city, Alfred is willing to commit a small sin. Like many servants and working class characters in literature, his own dilemmas mirror those of the upper class only on a small scale. Both Alfred's and Batman's decisions rest on the idea that if people knew the truth they would fail to act ethically. In doing so, they violate the trust people put in them and they do not much trust the people who they hope to save.

I think ask has it right. Alfred is making the same decision for Bruce that Batman makes at the end of the movie for Gotham. He is deciding that Bruce needs something that is better than the truth. He is needing hope that he will only find in deception.

Alfred does precisely what Batman would do, he does what will bring some sort of peace to Bruce as he grieves Rachel's loss. He allows Bruce his lost love so that he will go on.

I didn't find Alfred's destruction of the letter to be a betrayal, in the end. I found it to be his carrying out of Rachel's wishes.

I hope we can look forward to more of these DK character studies, Scipio.

You're the only other person I've heard of who found his accent grating. That's not what my idea of Alfred sounds like, dammit!

No, Alfred should be Class, not Cockney.
I thought Alfred was like the audience surrogate; everyone in the theater knew the Rachel thing was going nowhere & taking up time, Alfred just ended the charade. It's not like 3 Batman movies down the road he's going to be gazing longingly at her photo and sobbing "If only..."
Alfred's little anecdote about burning the forest suggests his anti-Batman sarcasm is a sham; he really wishes there was a better way than burning down the forest.

Let me second Gavin's view: ask has it right. A central moral issue in the movie is the populist versus the elitist, the democratic versus Great Men view, Frank Miller fascism versus Alan Moore concern with the effects the heroes have on the masses. Alfred's on the right and Lucius is on the left --the former thinks it's necessary to keep people safe from the truth, the latter thinks its necessary to rein in excesses of power.

Another great blogger --maybe Scott Eric Kaufman of Acephalous?-- has pointed out that, while the Prisoner's Dilemma in the Gotham River shows that the masses are not ready to descend into moral anarchy at the drop of a hat, Gordon (very much Frank Miller style) comes down in the end on the side of their fragility and need to be kept in the dark, when in fact he and Batman are the ones who have been thrown off balance by the Joker's corruption of Dent. Alfred lives their trajectory in miniature: he's also an agent of order who proves himself vulnerable to the villains' world view ("Some men just want to watch the world burn . . . We burned down the forest, sir.").

Josh, I posted at Acehpahlous too. Cool to see someone else reading the UCI crowd.