The Story of the Human Flame 1

Alright, since no one else seems willing to do this, I guess I’ll have to. After all, thanks to my research, I’ve spent LOTS of time reading the Martian Manhunter Showcase, so I’m as inoculated as one can get against the characteristic lunacy of a J’onn J’onnz story.

And since I'm the only blogger I know who ever talked about this guy before he was revealed to be a pivot point of the Final Crisis crossover, it behooves me to tell...

The Story of the Human Flame

"Yes, the secret is out!" This story takes place right after the existence of the Martian Manhunter first became public knowledge (in "The Unmasking of J'onn J'onnzz") to the phlegmatic citizens of Apex (Apexians? Apexites?). Instead of going "Nyyaahhhhg! A Martian is among us! Bomb him!" like any decently xenophobic denizens of the 1950s, the Apexers simply said, "Cool; our own superhero." When you live in a town where meteors fall daily, I guess you develop substantial sang-froid.

So, once he's come out, J'onn's first challenge is facing a Human Flame. Ain't it always the way?

Anyway, Mike liked to tinker, so he made himself an undefeatable crime suit, using the workbench pictured below; Ty Pennington, eat your heart out. 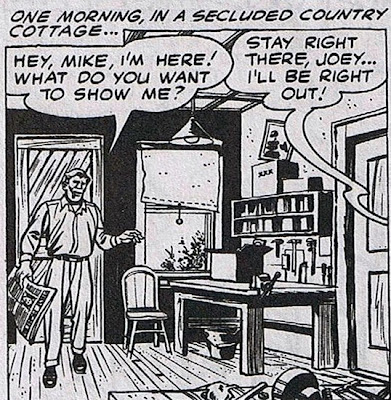 Poor Joey. Home from getting the Sunday edition of the Daily Clarion, ready to snuggle in at the secluded country cottage, eagerly anticipating Mike's emergence in a frilly negligee, or a boy scout uniform, or a leather harness. But instead... 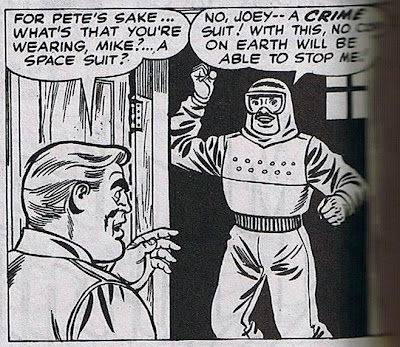 "Nnyyahhhhg! Jeez, Mike no "full body suit" scenarios!
Who do you think you are... Masterman?"

Now, if someone asks you over and is wearing a jury-rigged hazmat outfit that shoots fire and tells you he’s wearing a “crime suit”, you or any ordinary person would say, “heh..heh heh… yeah, um, that’s real nice, that’s a real nice crime suit alright oh, look at the time, gotta go return some books to the library catch you later, ‘cuz, heh, the police sure won’t while you’re wearing your crime suit!” But Joey is not an ordinary person, he’s a person in love, so he decides to tag along with Mike as his crime spree begins.

And thus we set the stage for our tale: 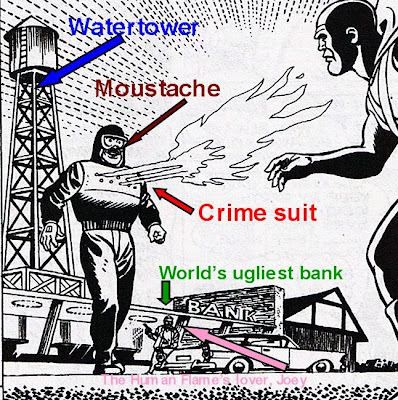 Apex City is known for its many unusual architectural adaptations, such as the "Internationalist/Tudor Crushed by Monstrous Water Tower" style.

Anyway, Mike seems pretty confident that no cop on earth can stop him because he's wearing a suit that shoots fire. I suppose the ordinary police couldn’t possibly handle the crime suit by, you know, shooting Mike in the leg. The crime suit raises other interesting questions, like, where does the fuel for the flames come from, how does it generate lightning bolts, and is that a cinch-waist jacket or sansabelt pants? If they're sansabelts, then Apex City is definitely in Florida. 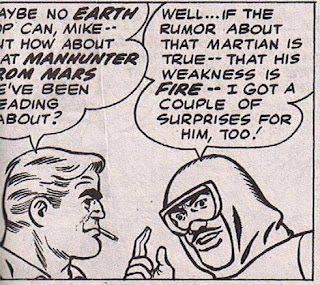 Mike didn't just design the crime suit to confound the cops (who couldn't possibly just shoot him in the leg), but to stymie the Martian Manhunter as well, since there's a rumor in the underworld that his weakness is fire. You see, in the previous story, J'onn defeated an invading Martian villain by using his Martian breath to suck in burning leaves from several miles away, then blow them into a circle around the villain, all without extinguishing the flames. Yes, really.

Anyway, the rumor may have gotten started when the villain, who was a total drama queen, fell to his knees screaming out loud to the entire city, "FIRE--the one Martian weakness! I--I'm losing all my strength! Oh-h-h!" That's how rumors get started.

By the way, how we got through that panel without seeing Mike light Joey's cigarette, I'll never know.

Mike, like many inventors, had his concept down pat, but was a little fuzzy on how to apply his technology. Thus, his plan for using the crime suit is to stagger leadenly down a Florida highway like a crazy guy on the road until an armored truck comes along. Which, fortunately for the plot, and Mike, it does. 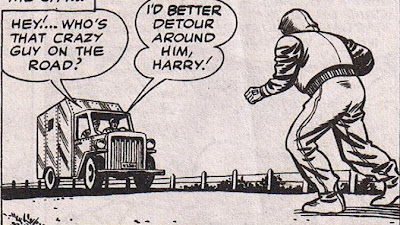 Just in time. Mike's already taken a dump in the crime suit and is about to pass out with heat exhaustion from walking along a Florida highway in a fireproof suit. I think I'm going to re-do my Apex City map to include a roadsign that says "DETOUR -- CRAZY GUY IN ROAD NEXT 500 FEET".

Although we call crime-suited Mike “the Human Flame”, the suit actually did more than just shoot flames. Give the guy some credit. It also shot out electric bolts. In fact, Mike appears to have developed a practical, affordable, portable, non-lethal, and directable EMP generator.

Oh, if only someone like, say, the Army, would be interested in such a thing. They might have made Mike a nice offer. Pity. Or he could have marketed it as an anti-meteorite coat, and become the richest man in Apex overnight.

Naturally, the security guards radio for help, and, even more naturally, John Jones is the only person to turn up.

Even more more naturally, John turns into the Martian Manhunter to handle the situation. Rather than, you know, just getting out of the car and shooting Mike in the leg... . 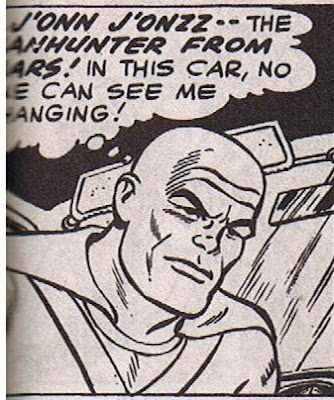 So, instead of just shooting Mike in the leg with his service revolver, J'onn has to use his absurd panoply of Martian powers to deal with the situation. What do you think he does (no fair peeking in the MM Showcase?)

(a). uses his superstrength to throw a rock at Mike, breaking his leg.
(b). uses his invisibility and intangibility to sneak up on Mike and tie his shoelaces together, causing him to trip and break his leg.
(c). uses mind-over-matter to draw gold from the local seawater and bribes Joey to shoot Mike in the leg.
(d). summons all the powers from the void of space to conjure a giant ice cream cone atom by atom with which to dowse the flames.
(e). something pointless that doesn't debilitate Mike but gives him the opportunity to attack the Martian Manhunter.

Well...if I lived in a city where daily meteor showers are the norm, you'd better believe that I'd enjoy having a Martian around. Besides, it's Florida. I imagine that, with all the heat and humidity, getting cranky about things JUST isn't worth it. Especially during a Meteor Shower.

Aren't Mike and Joey just the ginchiest? Exactly why Mike would chose to wear such an outfit in FLORIDA, just reinforces the idea that he's completely nuts. I'll bet they have to hose that suit out, every time he uses it.

Oh, and my guess would be "e". For SOME reason. But I like the extracting gold from seawater scenario as well.

Thank you so much for doing this. I haven't been able to buy any of the Showcase editions since I got to Japan. I'm stocking up when I get home...

I'm sure it involves some Martian sucking.

Take that as you will.

Bwah! Awesome post, pal, especially your diagram with the arrows.

(Seriously, what is up with that bank? It's like they asked Frank Lloyd Wright to design a Stuckey's.)

Yeah, I miss those old-time splash panels that say "Here is everything you need to look for in this story!"

It's like they asked Frank Lloyd Wright to design a Stuckey's

You should see the new County Courthouse built in New Castle County a few years ago. We call it the "Mall of Justice".

I feel so better prepared to read Final Crisis now! Thanks for posting this, can't wait until tomorrow for the wholly unexpected resolution.

Btw, Joe and Mike's love story...so ahead of their time. No doubt where Morrison, Ellis, Millar and all those guys get their ideas from.

Whenever those early Silver Age characters encountered their One Weakness, they would always loudly announce it to everyone in earshot.

Everyone thinks that they got rid of the Yellow Weakness for John Stewart's ring in the Justice League animated series -- but I'm not so sure they did. It's not always consistent, but there are a few instances where something yellow gets through his defenses without actually overpowering them. The one that stands out in my memory is the yellow poison gas in the pilot episode.

John, however, never confirmed or denied this, because if you have a secret weakness, it's probably a good idea to keep it secret.

In the episode where Lex and Flash have a Freaky Friday, Lex/Flash throws food as hyper-velocity at a group of heroes including Green Lantern. GL throws up his usual green bubble to stop the incoming projectiles... but some yellow custard breaks through right into his face.

One of the quickest and best gags on the show.

It is a funny character, not my favorite but it sure is hilarious.