The Rise of Nightwing 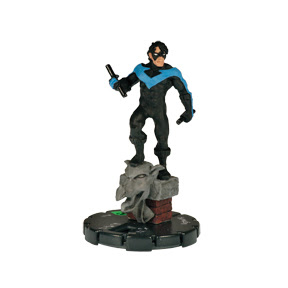 Well, I think we finally have the Nightwing we've all been waiting for.

At least, in Heroclix.

There's already been a Nightwing Heroclix figure; it was in the first DC set. But in the first set Heroclix designers didn't quite have the hang of how to use the dials and the mechanics of the game to represent comic book characters.

The original figure did do some cool things, particularly his double incapacitate, which allowed him to paralyze two opponents with one attack. But, like many early figures, he had a glass jaw and very little utility in his lower dial.

Naturally, this did not please the Wingnut crowd, and they've been clamoring in vain for a new Nightwing in each subsequent DC set. They've had no luck and had to stand by and watch Wizkids put out the Vampire Batman, Batman With Kryptonite Gloves, the Golden Age Batman, Kingdom Come Batman, Parachuting Batman, Batman One Million, and Batman&Robin. Even worse, they've had to stand by like ill-coutured bridesmaids as Wizkids, rather than making a new Nightwing, wasted slots on figures like Lady Shiva, two Starfires, the Human Defense Corps, Kobra, Maxima, Rocket Red, Jade, Jinx, Hyena, Azrael, the Shining Knight, Black Mask, Katana, Vixen, Alloy, Copperhed, Aztek, Firehawk, Merlin, Zauriel...

But for the Wingnuts, the sun has now risen! I can't imagine how many of these little boys'll be under Devin Greyson's pillows. So to speak.

Nightwing can divide his time among all those teams for the first three slots of his dial, when he also has another special power to give him some mobility and protection:

Acrobat Nightwing can use Combat Reflexes, Energy Shield/Deflection, and Leap/Climb.

That’s a +2 to his defense against both ranged and close combat attacks, and even if the power is countered by an opponent’s Outwit, his defense values remain solid. Pair that with a 6 range for his BATARANGS (Incapacitate) and Leadership on his opening slot, and he’s ready to lead his allies into battle and set up his opponents for his friends’ attacks.

Past his opening slot, Nightwing provides cover for himself and his allies using SMOKE PELLETS (Smoke Cloud) and can tweak combat values as needed, since he was TRAINED BY THE BAT (Perplex).

Deeper in his dial, Nightwing’s combat values remain steady—with his defense value even climbing back up (still buffered by Combat Reflexes!) as he gets his second wind and his final special power:

Fisticuffs Nightwing can use Flurry.

Holy hot stuff! What a great dial! Now, the whole Outsider and Titan abilities thing doesn't thrill me, because I find those abilities dumb and confusing, and the teams they represent don't interest me much either. But his very strong defensive abilities are a great plus and a dial full of Perplex and Outwit makes him a great addition to the Batman Family.

The new Nightwing dial is a perfect example of using the "Special Powers" mechanic to overcome a design flaw in the original set up of the Heroclix dial, that is, the inability to give a figure more than one power in the same place on its dial.


With this newly useful Nightwing, look for a return to some classic Batfamily teams, like

Wizkids finally "gets" Nightwing (which is more than I can currently say for DC). Maybe we should have the the Wizkids designers write Nightwing's series, too...?
Posted by Scipio at 9:33 AM

Multiple team abilities is amazing; especially since wildcards can copy from him and he's a brilliant tactician.

He can stealth himself to get next to an opponent, become an Outsider to cancel any modifiers, and become a Titan to heal himself if necessary. Plus with some amazing defense numbers, he won't be getting hit that much anyway.

The new Deathstroke's really good, too. He can split his damage up between muliple adjacent enemies, and he can increase his attack if gets ganged up on.

Nightwing and the Legion of Superheroes here I come!

Plus Disco Nightwing and that Space-tramp girlfriend of his!

You must be... whatever the living equivalent to rolling in your grave is, Scip.

I know we don't share a passion for Richard Jonathan Grayson, but I am very, very excited about this piece.

Can someone please explain to me why Nightwing's original costume is referred to as a "disco" outfit? I was alive in the disco era and I don't recall anything like that.
If it's just the collar, then Weather Wizard and Deadman were fashion trend-setters, anticipating the disco era by more than a decade.

You know, I skimmed the last issue of the new Nightwing creative team, and my first thought was "this new direction will please Scipio". Was I right?

I haven't read it, Tim; tell me about it.

From the "Legacy" set, and based on one of Jim Lee's characteristic pin-up shots from the Batman/Superman series, I believe.

High collars open down to the navel associated with Disco? Where did we ever get that crazy idea?

High collars open down to the navel associated with Disco? Where did we ever get that crazy idea?

Then, like I said, Weather Wizard and Deadman started the disco trend.

Well, you've often said (and I agree with you) that Nightwing is for the most part a dull character, stuck in some weird post-Wolfman angst-cycle that tends to make his stories about as interesting as watching paint dry. But the issue I read just seemed *fun*, with Dick going out of his way to do fun daredevil things like jumping out of airplanes despite Batman's disapproval of such "frivolities".

Plus, there were a couple light touches like Dick hanging out at the Cloisters in NY and fighting four-armed zombie hawkmen that just combined to give the impression that they're actively trying to make the book readable again. Which it wasn't for a long, long time. I bought the first few years of the book because I liked Scott McDaniel's art (yeah, he used to be good, I swear), but didn't really like the character then, and every time I've checked in throughout the subsequent years there's been to change my opinion. This, however, has potential.

Because, Azrael, you represent the 1990s DC practice of replacing iconic heroes with "bad-ass" versions, as was done with Batman (Azrael), Wonder Woman (Artemis), and Superman (the Reign of the Four Supermen).

Reign of the Supermen is still one of my favorite story-arcs ever! Granted, I'm one of those that began reading comics after the whole Death of Superman arc, so maybe it's just a nostalgic attachment.

I'll second (or third... whatever) the praise for the last issue of Nightwing. I don't care for the non-Robin Dick Grayson in general, but it was certainly leaps above the usual Nightwing comic.

Another notch in Nightwing #140's headboard, I'm afraid. It featured Nightwing actively trying to become his own man, asking someone to call him "Richard", finally deciding to set up an HQ in New York, a reverence to one of New York's most famous unknown landmarks, and a believable brotherly relationship between Dick and Tim.

All that and I'm not even mentioning the plot.

About the Heroclix figure: doesn't he seem too powerful? With three team abilities, Flurry, and jaw-dropping defense, this Nightwing is enough to make OotS Batman shake in his boots.

It's a nice Nightwing sculpt, but why is he standing on a bust of Brian Meltzer?