In other zany news, there are four (!) new previews available of the forthcoming DC Heroclix set, Crisis.

Psimon, Forerunner, and Klarion don't float my boat; nice dials, but the characters don't interest me.

But Mercury of the Metal Man? Hot liquid dang at room temperature! 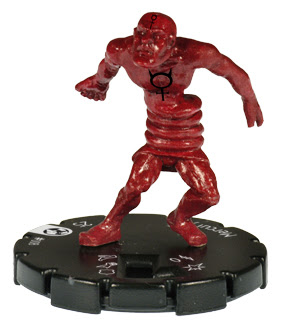 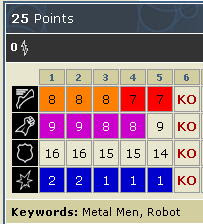 Now I wonder whether the rest of the Metal Men will each be 25 points or a similarly low number, resulting in easy composed 100/200 point Metal Men teams.

They need a Doc Magnus figure with some Outwit, some Leadership, and lots of a special power, say, "REPAIR", that grants him Support for figures with the Metal Men keyword (or even the Robot keyword, since he seems to be the go-to guy for robot repair).

What are you expecting now from the other Metal Men? Will Gold and Platinum have Elasticity? Will Lead have Defend or Barrier? Will Iron have Toughness? Will Tin have... okay, what the heck would Tin have?
Posted by Scipio at 9:31 PM

Tin would be a bystander token.

Actually, I'm just wondering if WK will put all the Metal Men in this set, or will they string them along like the Freedom Fighters.

Tin's special ability will be S-S-S-Stutter!
And yeah, they'll probably do one a set for the next six sets, kind of like the Fatal Five and the Wrecking Crew.

I can imagine Tin having perplex, and maybe 4 clicks of life with crappy numbers. Lead seems perfect for willpower, too.

Doc Magnus has to be a piece, too. I can imagine him getting the usual outwit/perplex/leadership stuff, but maybe some kind of power that lets him amp up people with the Metal Men keyword?

I too hope Doc Magnus gets a sculpt; but better men, women and chimps than he have been relegated to pog status.

Tin may have Stealth, which would make him very useful indeed.

Another new character has been subtly announced for Crisis: THE CHIEF!

Glad to finally see the Metal Men and Doom Patrol get some attention.

I play for characters, not dials or wins.