More and more of the forthcoming Crisis set of Heroclix is being released, and, while some of it interests me less than zero (e.g., Harbinger, Mammoth, Jericho), other figures are simply peachy.

I've previously mentioned my joy at Uncle Sam, but now we're getting some love for the original Teen Titans, too! They are nice low-cost figures with unique tactical advantages that make them very playable figures, without needing to be high-powered brutes. 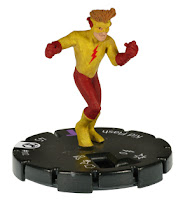 The new, original Kid Flash figure doesn't just have hypersonic speed. He has the special ability to run at hyperspeed up walls or through them! And he has another special power that let's him blow adjacent foes away with a little tornado, using Force Blast as a free action. Finally, a Flash who can do what Flashes do. And at 45 points, he's a steal.

The new, original Wonder Girl has many of the standard powers you'd expect: Flurry and Charge to represent her speed, Superstrength and Toughness, Leap/Climb for agility, and Deflection for bullets and bracelets. At 94 points, she's the costliest of the New Original Teen Titans. But she's not just another flying chick brick!

She's got some Running Shot and a special "Tie Up" power that let's her incapacitate two foes who are adjacent to each other. What an amusing, accurate, and useful way of representing her use of her lasso! Look for her to be the new antidote to flying foes who are 'taxiing' tank-like buddies. Plus, she's got Enhancement, the ability to increase the damage done by adjacent allies. So expect her to be regularly accompanied by her new best friend...

"Brave Bow's Apprentice" gives him a plus +1 attack value on a ranged attack. This is something all the bowslingers should have! But his special "Trick Arrows" ability lets him dissolve barrier markers ("acid arrows"!) or dissipate smoke barrier markers ("fan arrows"!); three at a time! Previously, there was no figure that could effectively deal with these kinds of barriers, and Speedy's going to be a very popular guy, particularly when teamed with other long-range fighters (such as the other members of the Arrow family). Like Kid Flash, he's a mere 45 fricking points and a steal. 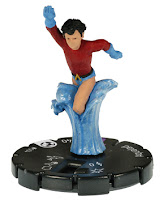 Of course, I've saved my favorite for last: the Big-Headed Purple-Eyed Freak figure. Or, as some people call him, Aqualad. He's got the requisite Superstrength, Willpower, Toughness, and Aquatic ability. But the Maritime Goofus also has a special power, Up From the Depths, that grants him Charge, plus blocking any line of fire to him as long as he is in a water square. And I mean any line of fire; those neat little tricks like the Superman Ability that ordinarily might let you fire at hidden figures do NOT work on Aqualad. Yes, the Chicken of the Sea's special power is ... hiding.

Is Aqualad too powerful for 40 points?

Will they make a one-piece bathing suit boy-crazy Wonder Girl?

Will I get enough Speedies to be able to mod at least one of each of my other archer figures with that boxing glove arrow?

Will they make short pants Dick Grayson to complete the team?

Will they make a one-piece bathing suit boy-crazy Wonder Girl?

Hey glad you're feeling better Scip. I wouldn't wish what you had on Arm Fall-Off Boy. But for next time(or if you want a vacation) how about a Guest Blogger? It worked for that Johnny Carson fella. Don't you know someone who erreth not?