Yesterday at the comic book store, some people didn't understand why the writer of the wonderful Teen Titans Year One choose to make Aqualad afraid of fish. 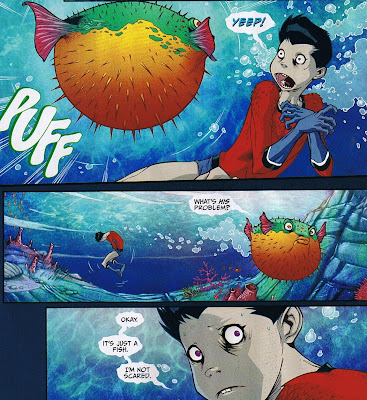 Hilariously so, I might add. By the way, do you think that's Peter? I like to think it's Peter.

The writer (Amy Wolfram, by the way) didn't make Aqualad afraid of fish, Jack Miller did ... when he created him in February 1960. 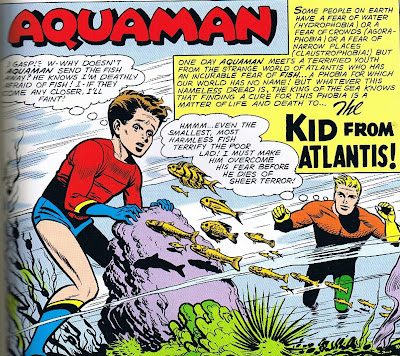 "Whatever this nameless dread is"-- I dunno; let's just call him "Aqualad"!

Aqualad's origin begins with him being expelled from Atlantis in a bubble dish like a spoiled Asian Chicken Salad at Boston Market. He was expelled partly for his own good because he was afraid of fish. But mostly because he was a big-headed purple-eyed freak. 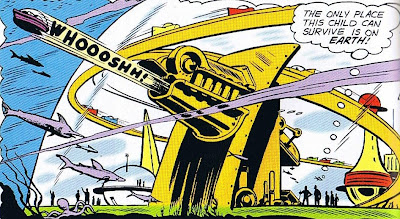 Gotta love the Atlanteans for having a gigantic Orphan Cannon set up just to expel unfit children into the open seas. Apparently, poor Aqualad got thrown out just as the Atlantis World's Fair was ready to open, just like a stray dog in Beijing. Or maybe it's part of the fair's entertainment ("Expel the Freak-Children, Only a Dollar!"). By the way, ppssst, Atlanteans; you are on Earth. Morons.

Naturally, Aquaman is both sympathetic to and diplomatic about the pathetic reject's plight.

Uh-oh. Dr. Curry has determined you're an unfit "rejected specimen". Nurse Topo, dump this one in the biohazard disposal and call the Atlantean orphage for another specimen of sidekick!

Okay, okay; it was actually established in a previous story that purple eyes were a sign that a child would eventually lose its ability to breathe underwater, and that Atlanteans regularly sent such children to the surface to save their lives. C'mon; you didn't really think Elizabeth Taylor was human, did you? 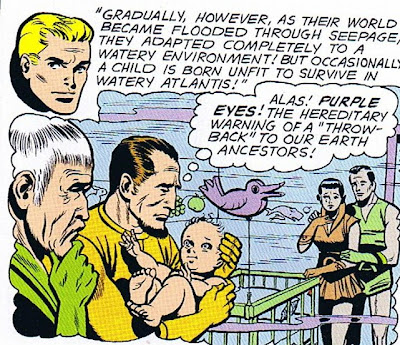 A bird? Really? When you live on the bottom of the ocean?

But since that's not the case with Aqualad, who CAN breath underwater, I say it's an excuse, and he's really expelled because he's intrinsically loathsome and cowardly. 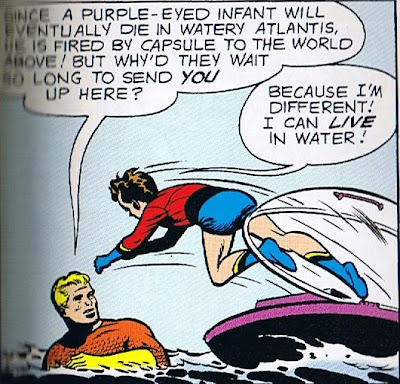 Face it, Aqualad. They're just not that into you. I mean, that fact that they never even bothered to give you a name should have been your first clue, you know? Oh, and if you think you're afraid of fish now, just wait'll you mess up Aquaman's hair by leaping on him like a lamprey!

Some fool writer would later hijack the whole "Atlanteans rejecting those with certain physical characteristics" and apply it absurdly to Aquaman. And his fabulously well-coiffured blond hair, of all things. Yeesh; and they say that the Silver Age was stupid! 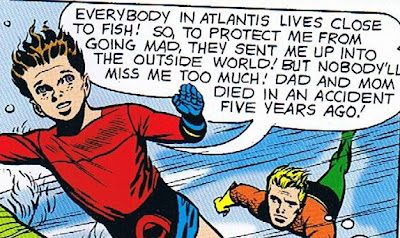 Or, at least, someone told you they died. Ordinarily, I'd say "Nobody'll miss me too much" would make a great epitaph for him, but in Aqualad's case it should be on his tee shirt not his tombstone. Of course, I'm sure Nightwing, Donna Troy, and Wally West leapt into action when he disappeared (*snicker*). We just ... never saw them do it.

Anyway, Aquaman eventually cures the fre-- I mean, "Aqualad"-- of his fishophobia, for which task a total command of all sea-life comes in handy. But glorious scenes like this one... 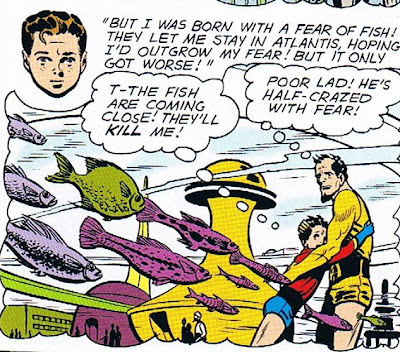 are how I always like to picture Aqualad, particularly since it's consistent with all his later wussiness. Oh, I pick on Aqualad, but, in truth, comics have scores of plucky, unnaturally fearless kid sidekicks, and to have at least one who'd be more at home in a Scooby Doo cartoon is refreshing. 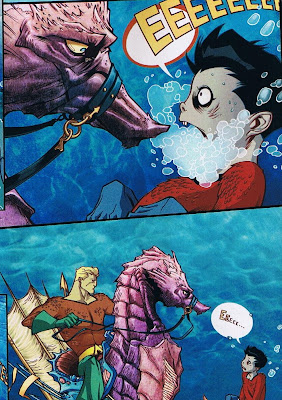 And saddling poor long-suffering, don't-get-no-respect Aquaman with this underwater albatross is too perfect for words.

By Neptune, his hair looks nice!
Posted by Scipio at 3:11 PM

I'm more interested in why the design of Aqualad is so ugly. It's like the artist intentionally hates the character so much he had to make him look as bad as possible. Pointed ears? Odd coloring? Tiny upturned nose? What is the artist smoking, if he thinks that is any sort of good design?

I think it's simply the use of strong but not necessarily realistic visual clues to convey emotion, a la anime. Look at the scenes with Bored Bart or the little birds flying around Wonder Girl's head.

Aqualad's scared and uncomfortable, and he looks it.

Eh. It's ugly. I forgot to mention the buck teeth. I thought the artist did a fine job with Aquaman, but Aqualad's visual simply sucks.

I like little Garths' look. He's pallid and weedy and looks like one of his ancestors did unspeakale things with one of the fishy Lovecraftian Elder Gods. Probably Cthulu.

I've been calling him Garthulu.

scipio, I've been reading comics for 30 years, and I didn't know that about Aqualad. truly, you are the undisputed king of DC lore.

Now you see why I find him so amusing, particularly in contrast to that laughing young daredevil, Robin the Boy Wonder.

I did know Aqualad was afraid of fishes, mainly because I've read it time and again in this fine blog.

Aqualad was later given a name, which shold have been a clue that they hated him... they called him GARTH!

And Aquaman was not rejected because of his beautifuly coiffured hair was taken as an omen... but because they envy him.

Chance said...
"scipio, I've been reading comics for 30 years, and I didn't know that about Aqualad. truly, you are the undisputed king of DC lore."

This was super-informative for me, as well. I had no idea the purple-eye thing went that far back. Some enterprising TV producer needs to get you into some comic-themed "The More You Know" PSA spots!

Well,we were all skinny and geeky once...and Lovecraft had a fear of fish too,and we all know how HE turned out!

I love the fact that he's so afraid he sweats, underwater.

A bird on the crib? Well spotted!

And give me an afraid of fish Aqualad over a moody magic-using Tempest any day.

As a long time Aquaman and Teen Titans fan, I LOVED the first issue of this miniseries! The weird look of Aqualad bugged me at first, but there is something endearing about it. I suspect the contrast between Aqualad's lostness and Aquaman's aloofness is an important set up for the next Aqua-centric issue. I think that by the end of the series Aqualad will be shown in a suitably heroic light.

Of course I recognized and laughed out loud at Aqualad's reaction to fish in this book. But if Amy Wolfram purposely included Peter the Pufferfish (of course from the first (or second?)paqe of the first Justice League of America story ever in Brave & Bold #28) then I am enormously impressed.

In any case it didn't occur to me that it could be "Peter" until I read your blog this morning. Scipio, once again you have made my day.

"And give me an afraid of fish Aqualad over a moody magic-using Tempest any day."

Well that settles it. I passed this up last week, and have just come to realize that I was a FOOL to do so.

I too, did not know this about Garth, so thanks for the heads up! After all, knowing, is half the battle...or something.

I thought he was only afraid of Schools of fish. Odd that.

As has been said, knowing is half the battle. The other half? Turns out it's killing people.

Also, by the earliest pages of Teen Titans, Garth was dreamier. All curly-haired and short-panted.

The bird on the crib isn't *that* weird. After all, among us air breathers there are probably crib decorations featuring clown fish ala Finding Nemo. And the Atlanteans would no doubt have some exposure to birds diving into the water, sitting on it, and flying above it.

Aha, man, Aqualad. He's always been one of my favourite comic book characters- mostly because for the longest time, I had a similar fear of birds. Not quite as dramatic, but they scared me sh'tless. My sister was the one who'd read Aquaman and pointed it out to me, and I loved him ever since.

I alternately want to hug him forever and whack him with something big. XD Love the kid.