Behold, the glory that is... 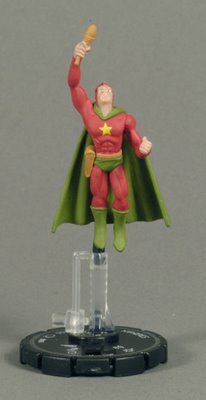 What a build! He's big enough to be on The Real World: Opal City. Hats off to Wizkids for remembering that, because Starman was drawn by Artist of Athletes Jack Burnley, the character was better and more finely muscled than his contemporary crimefighters. Starman invented the eight-pack, baby. And check out those manly Westphalian watermelon-crushing thighs! Why, I bet he could incapacitate you just by kicking a chair at you.

As noted on the Superman Is A You Know What site.

Starman packs a good deal of muscle on his dial as well, particularly for only106 points.
His first two slots have Running Shot, which lets him zoom out and zap enemies on the fly. Similarly, he's got three slots of Energy Explosion for blasting entire clusters of opponents simultaneously. Energy Shield/Deflection as his defense power protects him from ranged attacks, and an inital slot of Leadership lets him inspire Willpower in his teammates (under the right conditions). Those two slots of Ranged Combat Expert will turn many a foe's adam's apples into applesauce.

Like many pieces, he's a leader and attacker at the start of his dial, but then, after he's taken a few knocks, becomes more defensive. In fact he's almost a latter-dial saint, using his Barrier to protect himself and his teammates, Force Blast to push away anyone who comes in for the kill, and his surprising Perplex to confuse opponents into lowering their defenses.

Besides, he has the JSA Team Ability, so if you keep another JSAer adjacent he can share their defense, making him tough to hit all the way down his dial. If you want to take down one of the JSAers, you'll have to be ready to take them all down!

Personally, I can't wait to have him face off against Jack Knight, and spank that slacker! He's also scheduled to school Ultraman at some point, who dare not relax for an instant.

The Golden Age Starman is one of the Uniques in the Origin set of DC Heroclix, coming in March.
Posted by Scipio at 4:32 PM 8 comments:

So many people have been critical of the level of inactivity in Justice League of America since its relaunch.

But, after all, Mensacentric Superinactivity is a long-standing tradition in the JLA, and one of the Clues You're In Justice League Story ... 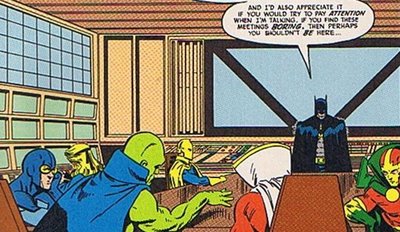 "Fortunately, if I nod off my helm will prevent my head from falling forward."
"When the movie version of this meeting is made, I want to be played by Linda Hamilton."
"I bet J'onn could take the form of any calendar babe I wanted."
"Dishwashing liquid, Captain?"
"Relax, J'onn; it's Palmolive."
"The irony: escaped the fire pits, but stuck at this meeting."
"I would trade the whole lot of you for one athletic boy in green swimming trunks." 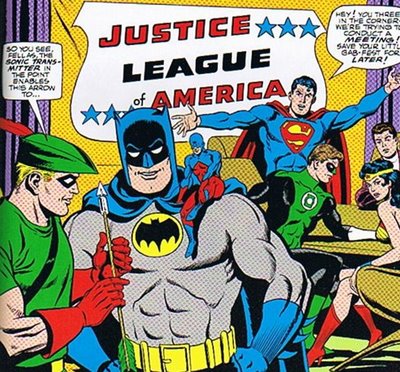 "Stupid tech geeks! This isn't AV Club! Get your butts over here before I fry them with heat vision!"
"Heh. I can see down Wonder Woman's bodice. Heh. Heh heh."
"Men!"
"Oh, Green Lantern; why won't you notice me?!" 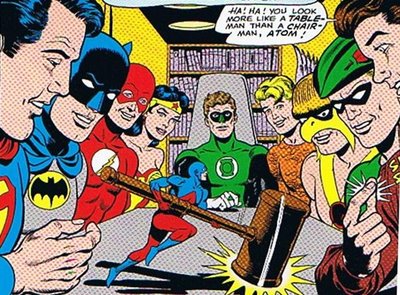 "If only we had some photos of other heroes to stare at and discuss; or maybe some exciting UN resolutions."
"Did I remember to tivo CSI:Gotham?"
"God, my hands are beautiful!"
"I bet the Martian Manhunter could take the form of any calendar babe I wanted."
"By H'ronmeer, Green Arrow's mind is like a sewer!"
"I'm so glad I built a toilet into this little chair!"
"Huh; this table has 147 fewer atoms in it than it did at our last meeting..."
"While I've been in this meeting, an estimated 11 people have been gruesomely murdered in Gotham, no doubt including one of my proteges."
"Hey, Peter? Wait, let me put you on hold; Topo's calling me on the other aquatelepathic line-- Topo? Yeah, it's okay, it's just Pufferfish, he can wait..."
"I'd give any one of them my virginity! Especially Green Lantern; gosh, his hands are beautiful!" 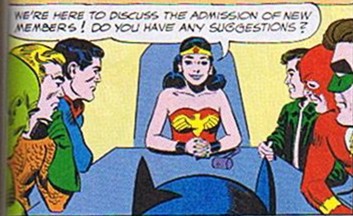 "Who's behind it all? Why aren't female characters immune from danger and suffering? Why does Dan DiDio hate Cassandra so much? Who's killing the great chefs of Europe?"
"I could be Kid Lantern if he'd only give me a chance!"
"Spitter? Snippy? Spackler? Julius H. Schwartz, why can't I ever remember this kid's name?"
"In the time I've sat here listening to this drivel, a rare jewel has been stolen, the reservoir's been poisoned, and a librarian's been shot in the spine."

Aquaman has "an important case" to work on? C'mon, even I don't believe that. Look; even Aquaman doesn't believe it. You can just see the implied thought balloon: "Let's see now: sea cow milk; fish eggs; jeez, if I forget anything, Mera'll kill me! Finny friends, come to my shopping aid!"


Sometimes during those slow times, the civicly-minded Wonder Woman leads them all in rousing discussion of international policy, particularly UN directives on NGO-initiated commisZzzzzzzzzzzznn....

"Must-- stifle-- bat-laughter!"
"I could run over to Zatanna's place, finish, and be back before they notice!"
"I mean, she's not that pretty. Not as pretty as me, certainly..."
"HA! I knew I could p*ss on her hand from here! I'm the man!"
"What do you mean, the sharks are 'busy'? Oh, for Neptune's sake, Minnow, can't you even handle Cutlass Charlie by yourself?! Fine, I'll contact the candiru for you..."
"Then, after I've killed them all, I'll use my x-ray vision to put my face on every quarter in the nation..."
"I really need to see a doc about these lesions; darn you, Zatanna!" 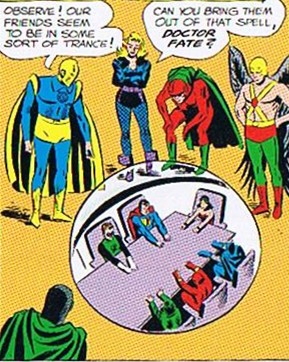 "A quaker meeting?"
Asked Starman, constipated.
"Where is the Drama?"

Let's just hope that things in the Justice League of America are finally sparking up a mere six issues later, shall we?

Today, I offer for your delectation a farrago of images of some of our local faves. 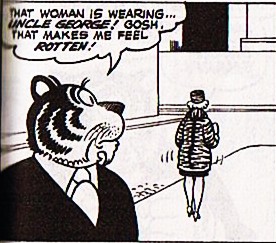 Don't be hating on TT; his life's hard enough as it is. 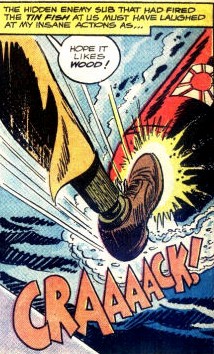 Say ... do they keep changing which leg is the wooden one?

while the great Batman stares, utterly nonplussed
("But... but even I can't do that!")

Does anyone miss -- or even remember -- Haikuesday? 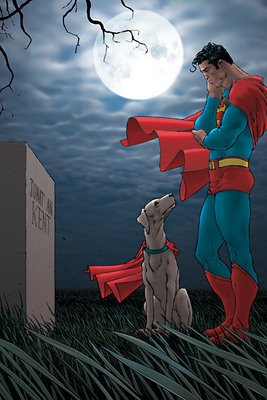 Like wheat in the fall,
Pa's cut down, leaving behind
a boy and his dog.

Finally, Black Canary was having a relationship with someone respectable, and they were forced to pull the plug on it when Jackass Queen came back to life. Now that she's in Mama Mode with, oh, whatever that kid's name is, bringing a stable male character back into her life is a good idea.

Now that Brad's had the opportunity make his "pretty bird" joke, Hawkman'll come back in a month or so and punch him in the face. Besides, what would Hawkgirl see in a jerk like Arsenal? Arsenal and Huntress are a natural couple with their faux-rebellious streaks and it would provide a sensible opportunity to bring Huntress into the Arrow Family where she belongs.

Fabulous Kate Kane needs to stop slumming and be detached from Scary Alcoholic Mess Renee Montoya. We know that Etta Candy Whom No Man Can Possess is coming back, and while a pairing between the two may seem unlikely at first blush, I maintain that anyone who fights crime in red heels has got to have a sense of humor and would hit it off famously with Etta. Woo woo!

Nanette Phaedon hasn't appeared in the All-Nude Atom yet; she debuted in Firestorm #22 (the issue where Firestorm became cool). Due to some wacky Firestormy encounter, she can shrink (or is permanently shrunken, I'm not sure which)! What could be more natural than to have her seek out the Atom to get -- or give -- some advice? And perhaps some teeny weeny companionship?

After all, we know Ryan likes forceful women like Nanette and, face it, his relationship with Dr. Zuel isn't a keeper.

I mean the real Aquaman, of course. Esther Maris is the science reporter who Aquaman became intimate with during Arcudi's run.
Posted by Scipio at 7:52 AM 16 comments:

Feat Card: King of the Sea 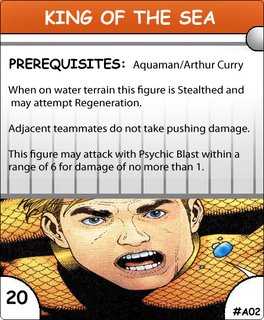 "When on water terrain this figure is Stealthed and may attempt Regeneration."

This is an extension of the Submerged Feat Card and the known revitalizing effect of the water on Aquaman (as already reflected by the Regeneration that appears on one of his dials).

This is adapted from the Inspiring Command Feat Card, and is a reflection of Aquaman's abilities as an inspiring leader (as already reflected by the Leadership that appears on most of his dials).

"The figure may attack with Psychic Blast within a range of 6 for damage of no more than 1."

Aquaman's hasn't frequently been shown using his psychic abilities against opponents, but there's certainly precedent. The limitation that he can only do one click of damage keeps it within reason.

This card helps Aquaman play more like himself. Using it, you'll want to keep Aquaman in the water as much as possible where he's stealthed and immune to ranged attack (except from pesky Superman types). From there, he can annoy your opponent by using his telepathy to pick away at the other team.

Once he hits dry land, he'll start to take some knocks. If he's weakening, have a friendly figure (such as Wonder Woman, J'onn J'onnz, Animal Man, or Vixen) fly him back to water terrain, where he can attempt to heal himself and come back fighting.

Take some superfriends who have range (like Superman, Green Arrow, or GLs John Stewart and Kyle Rayner) and array them in front of him. While they protect him, his encouragement will grant them all Willpower, for quite a killer combo!
Posted by Scipio at 4:49 PM 6 comments: