Why We Love Congo Bill

As long time readers of this blog may remember, we are fans of the glory of one of DC's least appreciated legacies, Congo Bill. Congo Bill remains MIA, even though DC has brought back so many other forgotten and unlikely characters. Lady Cop. Detective Chimp. Koryak. Vibe.

Anyway, neither has Congo Bill. You may think that's because he's an idea whose time has passed; fools! If you think there isn't still an audience for watching white guys in unlikely outfits traipse faux-knowingly about Africa and such, well, then you don't get Animal Planet in your cable line-up, do you?

In case you don't already love Congo Bill (and I do mean Congo Bill, not "Congorilla"), here are some reasons to. 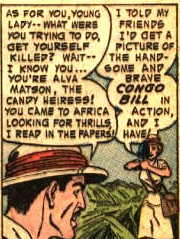 He hangs out with admiring candy heiresses. Named Alva.
Okay, DC; if you're not going to bring back Congo Bill,
at least make a passing reference to "Alva Patties" or "Matson Bars". 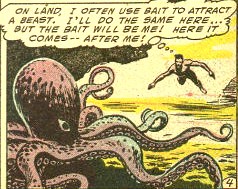 Bill can improvise a convincing manta ray costume out of sticks & leaves.
On land.
It really doesn't get more impressive than that, folks. 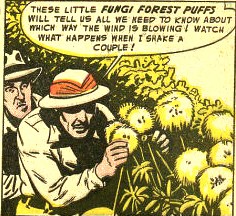 When Bill needs info, he roughs up his stoolies, the Fungi Forest Puffs. 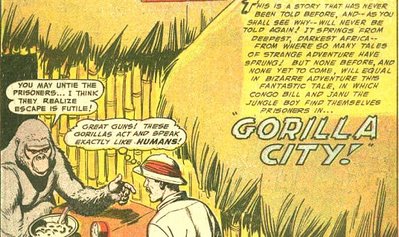 He hung out with talking gorillas in Gorilla City long before the Flash.
Posted by Scipio at 11:51 PM

Scipio -- where are those scans from? 1970's reprints, or do you own the only copy of CONGO BILL ARCHIVES?

There's actually a bit of business in 52 about Montoya, as a child, having devoured a stack of back issues of Congo Bill World Travel...

David: as it turned out, they weren't native gorillas. They were from Mars, and returned their in their spaceship. Yes, really.

Douglas: Thanks! I had forgotten that.

If they did bring Congo Bill back, he'd probably have his own show on Animal Planet.

as it turned out, they weren't native gorillas. They were from Mars, and returned their in their spaceship. Yes, really.

Isn't it possible that this was a hoax that Solovar pulled on Congo Bill to disguise the true nature of Gorilla City?

Congo Bill? Isn't he the genius who thought that rhinos eat zebras? And terrorized a very young Oliver Queen while on safari? The man's a menace!

"Why We Love Congo Bill"?

Why hasn't Congo Bill been revived? Because he's dead. Dead at the hands of the Gorilla Blowgun Death Squad
That, or the flamethrowing hippo got him.

Why hasn't Congo Bill been revived? Because he's dead. Dead at the hands of the Gorilla Blowgun Death Squad
That of the Flame-throwing space-hippo got him.

Congo Bill has a ring that transfers his mind into the body of a golden gorilla.

The Brain is looking for a body so he can consummate his love for Monsieur Mallah, a talking gorilla.

Why hasn't DC jumped on this? Congo Bill versus the Brotherhood of Evil is a story that practically writes itself.

On a side note, Fungi Forest Puffs sounds like the jungle version of Hostess Fruit Pies.

Don't worry. If I ever write a new Jimmy Olsen ongoing, Congo Bill will probably show up by #5 or 6.

Of course, I'd have to drag Congorilla along with. It's the all-ape issue.

Didn't they do that in a Swamp Thing Annual some years back?

No, that was one of the Mark Waid edited issues of Secret Origins, whose cover featured monkees, the colour purple, motor cycles, a question and somebody crying: all things that allegedly increase sales according to DC lore.