Hats of the Justice League 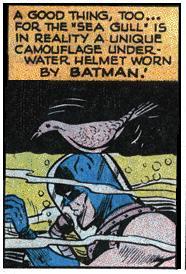 Batman's seagull helmet.
Posted by Scipio at 9:01 AM

I immediately read that quote aloud in my best Bill Dozier voice. Because it deserved it.

Wouldn't a loon have been a better choice?

How cool is the Seagull Helmet? So cool that James Bond himself stole the bit, in the beginning of Goldfinger. Nice.

It's a bit odd that the seagull helmet completely removes the back of his skull.

He's Batman. He doesn't need the back of his skull, man!

After seeing this and his already legendary bird hat, I eagerly await the debut of Batman's latest and greatest disguise-the Peacock Beret.

I just read an old Nick Fury Agent of Sheild (#10) from 1990 where Sheild agents pop out of the water with sea gulls on top of their wet suits.