Recently I won untold millions in a multistate lottery, and, rather than spend it on myself, I'm using it to create a new comic book, All-Gay Comics (or "AG" as it will be called casually). That's just the way I roll.

Rather than creating new characters, we'll be using the host of old ones left to the public domain by Ace Periodicals. That's because I have enormous respect for the Golden Age (and because that will avoid paying creators for the rights to their characterst). Blockade Boy is being hired to design them all new Mike Grell style costumes, but Fernando Albea will the regular artist on all books (he will be ghosted by a revenant Lou Fine). I have no writers lined up, but, with Abner Sundell as my guide, I guess I could just write everything myself ... just like my idols, Bob Kane and Stan Lee!

Chuck Dixon will be Editor-in-Chief.

Our goal at AG Comics is to return comics to their original purpose: making sure little boys turn out to be gay. For little girls we'll just reprint stuff from the Wonder Woman Archives.

This'll work out well, because that's what I got assigned to do at the last Homosexual Agenda Conference, and my "Queer Eye: The Animated Series" pilot got nixed.

Place your pre-orders now for the following titles...! 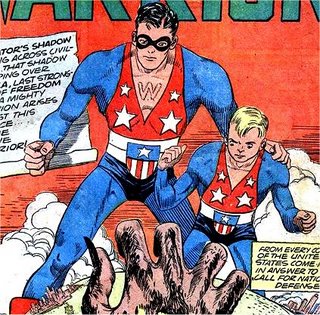 As you would expect from his name, "Lone Warrior" is brightly dressed in a star-spangled outfit and has a constant companion, named Dicky.

Both LW and Dicky have "W" scars on their chests (the story behind THAT will be told in a Very Special Foil Covered Issue). Dicky is publically billed as LW's "little brother", which, given their obvious generic disparity, is pretty iffy.

Their powers come from injecting themselves with "Power Elixir". At least, I'm told that's what the kids call it nowadays.

Oh, and that gigantic hand? Just wait until you see what it does to Dicky in the Annual!

The "DL GI" has superstrength and invulnerability, but, more fabulously, the ability to spin in the air fast enough to create tornados.

He has a special friend, Danny Morgan, who limps, for some unknown reason.

Blockade Boy has been instructed NOT to alter Unknown Soldier's costume. 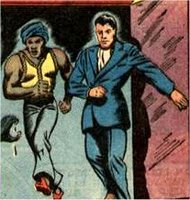 Mr. Risk is the "man who knows no fear". He's a good fighter and highly intelligent. He's seen here with his "faithful companion and servant", Abdul, who's extremely hot, even in bellbottoms and red pumps.

As part of an agreement I have arranged with the Department of Health, Mr. Risk and Abdul will be co-starring in series of PSAs on safe sex.

Arthur Lakehas an alter ego: The Sword, known for packing pounding excitement in every page (the Sword is Mark Foley's favorite hero). When the Sword starts waving his weapon around, mouths fall open in amazement.

The Sword has a sidekicked named "Lancer". I'm working on their first movie deal with Falcon Studios. 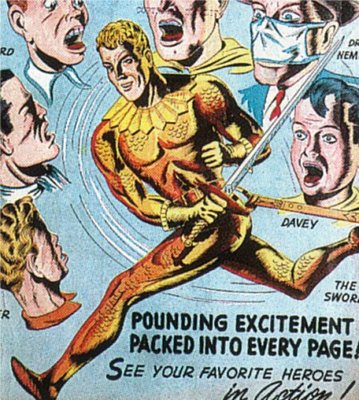 Marvo the Magician has the power of illusion, which he can use with a well-timed flick of his wrist.

Marvo's sidekick is Tito, a superintelligent monkey. Of course, with his power of illusion he can make Tito look like anything, even, say, a movie star. It's best not to think about it.
Posted by Scipio at 5:29 PM

I was chuckling before I got to "The Sword", but now I'm laughing so f*cking hard I can barely type!!

Such posts are my gold standard as a comics blogger!

Hey Scipio. Have you ever read the Gay City episode at Typolad?

You guys are killing me! I was already laughing so hard I was having trouble breathing at the Sword, but Marvo ...

Stop it! Stop it! Never do more than one at a time.

What's with all the golden age heroes who ran around with nothing covering their legs? Did dudes in the 1940s really dress like that? How come no dudes in black-and-white movies look that way, then? Any insights?

Oh, Scipio, Unknown Soldier is absolutely FABULOUS! When I start getting uniforms for my minions of Evil, I WANT that outfit.

Thank you,
AKA Baroness Von Evilstein

This....this was the most beautiful thing I have ever seen. Scip, you ooze with hot, thrilling genius!

Gee, and you haven't even gotten to other Ace characters like Buckskin.

Looks like you have a dynasty in the making here ...

Only a matter of time before I'm commissioned to do custom HeroClix of these guys...in my mind, I'm already designing the TA symbol...

You know how I feel about the combination of bare thighs and long sleeves, but for the Unknown Soldier I'll gladly make an exception. I can't quite explain why... maybe it's kicky little the hat that makes the whole ensemble work. At any rate, *rrrowr!*

Marvo's sidekick is Tito, a superintelligent monkey. Of course, with his power of illusion he can make Tito look like anything, even, say, a movie star.

But could he make people think the monkey is a big planet?

"What do you get when you join the homosexual agenda club?"