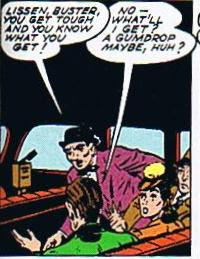 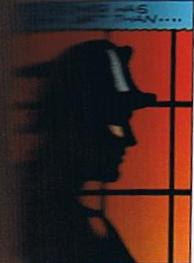 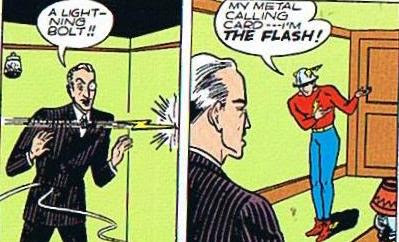 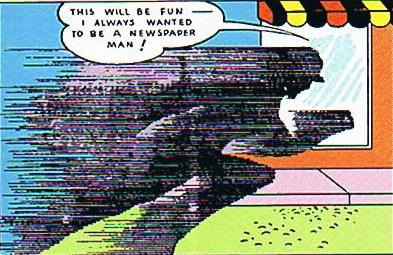 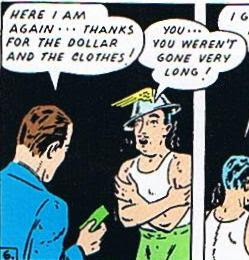 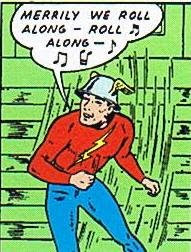 Brilliant. Jay is my favorite character in the DC Universe, and I tend to think of him as still being like this. But you're right - he isn't, and he should be.

Great post.
I was always curious about how the Jay Garrick Flash was characterized. Although I love Golden Agers, particularly Alan Scott, Hourman, Dr. Mid-nite and Hawkman, I can't say I find Jay very memorable.

The only thing I remember from recent continuity, is in the early issues of the Johns & Robinson JSA book when accused Captain Marvel of having an inappropriate relationship with Stargirl. At that time I thought, "Ugh, he's the old-fashioned sexual prude Flash..."

"Third, the original Flash (Jay Garrick, currently starring in the Justice Society of America) topped out at between 700 and 1000 miles an hour."

No way did he top out at that speed! In his very first appearance, he was able to intercept all the bullets fired from a machine gun mounted on a plane towards a crowd on the beach. In order to do this, remembering that there were multiple bullets with different trajectories and he needed to intercept them all and match velocities so they didn't drill through his hand, he'd need to be moving *at least* as fast as those bullets, which even back then would have had muzzle velocity on the order of 700-800 meters/second, or 1400-1600 mph. Really, to run back and forth intercepting the number of bullets shown, he probably needed to be going even faster, maybe about Mach 3.

I think of him as the "John Steed Flash".

Given Captain Marvel's bizarre insistence on not revealing his secret identity to Jay, I didn't think there was anything wrong in Jay's reaction to the Marvel-Stargirl relationship.

Of course, that was before we knew that every hero in the DCU has known every other hero's ID since the dawn of the Silver Age and they all call each other by first names even in public, so prsumably now it's been retconned away and Jay was just being an inexplicable prude.

Sigh. I miss the Ordway Marvels, or even just the pre-Countdown/ pre-Trials of Shazam Marvels. But I think I miss even more the idea that there were some distinctions and differences in how close some heroes were to others, and in who knew whose ID, and in who would use a first name in what circumstances.

Now I feel bad that I don't say "Thanks a lot, mister book!" every time I finish reading something.

It would be great to see Jay epitomize the can-do attitude of Golden Age super-heroes - especially since he is a creation of the generally less whiny "Greatest Generation."

Not that I don't think that Jay doesn't make a great "singing Flash" but I figure that the Absorbascon would be lobbying for Jay, Barry, Wally and Bart to be a barbershop quartet.

If Jay sings bass, that would actually work. And be very "Flash-like", given the strength of that artform in the Midwest.

I'm pretty much with the poster in the previous thread: if it's so important to differentiate Wally and Barry by making one so much slower, why not make *Barry* the one who can't outrun a bullet?

You know what else could distinguish Barry? He could be "the Dead Flash."

Posts like this are why I visit this blog regularly. Excellent work. Speedsters bore the hell out of me, so I'd have never given Golden Age Flash stories a chance. Seems I've really missed out. I've always liked Jay, but in that way you like Alan Alda, not someone cool. It makes me wonder about Max Mercury now, because he always seemed interchangeable with the homogenized Silver Age take on Jay that's stuck. Was the original Quicksilver also more interesting back in his prime?

I also mostly agree about Wally West. Mark Waid claimed to love the Flash, but he turned Wally and Co. into the Superman Family. I never liked his run, and never saw it as an extension of either Barry or Wally's prior stories. However, I'm not confident modern readers will accept the depowered Wally. Barry's the more interesting character, but that fanbase belongs to Wally, so it remains to be seen how this will pan out.

Funnily enough, whenever I thought about how to write a speedster, I came up with the kind of stuff Jay did seventy years ago. That's how I'd have written Wally. However, I think the Speed Force stuff could have generated as many stories as it killed with the right person at the helm. Problem was, both Waid and Johns are personality writers, not idea men.

1. Bart Allen is the Dead Flash
2. Doesn't him calling everything Mr. make him sound like a 5 yr old girl?
"Gee thanks, Mr Book, that sure was a swell read!"

The Strawman picks open a sore that I thought had scabbed over. In the ... what? ... five years since that incident, has NOBODY ever stepped forward to set Jay straight about that? Bad enough that there were, at that time, people on the team who knew better, and who should have stuck up for Billy. Jay at least had the excuse of not having all the facts plus being true to his old-school upbringing, but Hector Fate and Michael Terrific both knew or should have known better. This was a disappointing lapse for these super heroes, and the sooner I can get back to forgetting about it, the happier I'll be.

My impression is that Geoff Johns writes Jay as the indulgent grandpa who spoils the kids. Then Alan Scott was more of the stern grandpa.

I think any of the things you mentioned could fit in with his present-day characterization. I could even see him telling some corny old-guy jokes.

Oh Jay...my favorite Flash. I just love his helmet. He may have fought crime, but he managed to have fun while doing it. For some reason, I picture him sounding like Perry Como.

But slightly more realistic speed limits, and some variety in the way that the different Flashes will be portrayed would indeed be welcome.

I'm fairly certain the only time Jay has been limited to the speed of sound was the period between Infinite Crisis and the end of Bart's brief tenure as the Flash.

I'm not really sure why people haven't tried this yet, but why not have the various Flashes be able to move fast enough to catch bullets but only for relatively short distances. I'd be like sprinting, you go a lot faster than when you're in a marathon because you don't have to sustain it. Well same here!

How to distinguish Barry and Wally.

And last of all, Barry runs pretty fast, and Wally runs impossibly fast!!!!!

P.S. About Jay and Captain Marvel, doesn't he use that "hits opponent with magic lightning" move ever single god-damn fight? You'd think his age would be common knowledge!