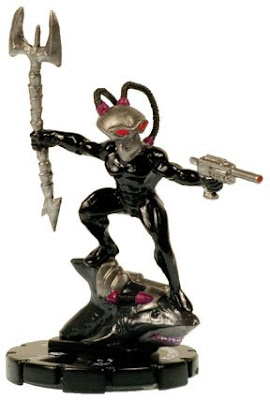 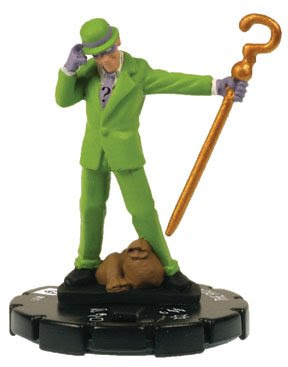 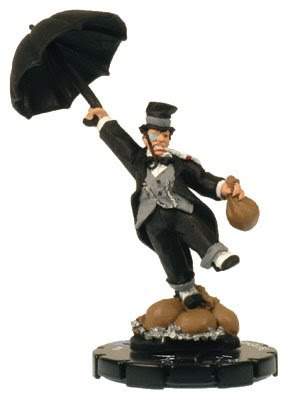 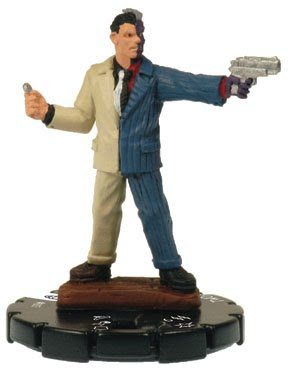 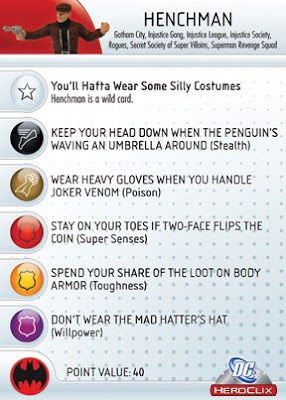 The upgrades on the Bat-villains from the early Clix sets are very welcome. Ditto the new version of Black Manta. Plus I'm excited at the prospect of finally having the Legion of Super-Villains to put on the table.

The sculpts are looking good so far, better than the rather static poses that predominated in Secret Invasion.

I LOVE the Black Manta one...love love love it.

But how is he part of Arkham Assylum? Isn't he an Aquaman villian, not a Batman one? Just curious.

I'd get the Black Manta...just to have...I have no clue how to play the game.

And the names for the LE henchman's powers are priceless. They obviously had a lot of fun with that.

The titles of the HeroClix booster sets are broadly thematic but not specifically binding.

So in Crisis, you had a bunch of Teen Titans (instead of Lady Quark and Prince Ra-Man; grrr); Armor Wars, supposedly about Iron Man and his foes, had several Alpha Flight members, etc.

So don't take the booster set titles too literally.

HeroClix is not that hard to learn. Get a starter set (Fantastic Four is the most recent) and a couple of booster packs, start small (200-point or 300-point battles), and then build to bigger, more epic confrontations. You can also mix and match DC and Marvel characters; they use the same rules.

Thanks Steve...I assume rules of the game are in each pack or something? Do you have to download boards and things too?

A starter set has the complete HeroClix rules, a map, dice, markers, and some figures to start with.

So, taking the Fantastic Four as the most recent example, the FF starter set has all four members of the FF, plus Dr. Doom and two different Doombots. The FF starter set also has a double-sided map, with the grounds of Castle Doom on one side, and the interior of the Baxter Building on the other.

The booster packs have randomly mixed figures (five in the current boosters, four in the older boosters) plus cards and supplemental rules as needed.

You don't have to download anything to play, although the WizKids site has the rules on line for downloading, plus bonus scenarios and a complete gallery of all the figures that have been released for HeroClix so far.

If you have a comic shop or games store nearby, the folks there can probably give you more advice on how the Clix games work and what starters or boosters you might be interested in.

As a serious modeler and painter (I play Games Workshop games and largely for the miniatures) I just want to say that it may be the case that WizKids has made great strides with their rules (I'll have to take your word for it).

But I know for a fact that they've made UNBELIEVABLE progress with their models and their paint jobs. There is just no comparison between the first run DC figures (I've got a few) and the stuff they are putting out these days. It's just incredible.

I'm excited to start working on some custom figures, actually. I'm just not sure who I should be trying to make... Got any ideas?

I've been ordering conversions from our esteemed correspondent totaltoyz for years. I specify a dial for him to mount the figure on, that has a power set and point total appropriate to the figure in question.

I'm big on Golden Age characters, so I have conversions for Ibis the Invincible, Rockman, the Fiery Mask, the Purple Tigress, the Heap, Magno, Jack Frost, and many others. Currently, totaltoyz is working on some pre-FF Atlas era monsters for me, and my next order for him will be all 35 victims of Marvel's Scourge of the Underworld.

There are undoubtedly hundreds of characters that will never appear in official HeroClix format: too old and forgotten, too obscure, too costly to get the rights (Spawn?), etc. Even within the DC and Marvel rosters, it's not likely that WizKids will ever produce Space Ranger or Dr. Droom or Roy Raymond or the Painter of a Thousand Perils. So knock yourself out!

Black Manta surfing on a shark with a laser strapped to its head...

Sounds like Wizkids are employing Chris Sims in some sort of consultant role.

I'm guessing some of the other sculpts will be of characters kicking people in the face or being kicked in the face; I'm looking at you Johnny Sorrow. (But not directly)

I must have the new Riddler. Both of them.

Not only does this one sound actually useful, but he's not in that awful unitard.

Hey, Nightwing (and Diamondrock), Steve is right, Definitely pick up the new Fantastic Four starter set. I don't even like the Fantastic Four, but I could not pass it up. The figures are beautiful.

How come that shark has those forward-pointing cutesy-wootsy Flipper eyes?

Black Manta is one of my favorites of the characters, he looks so great in that custom.